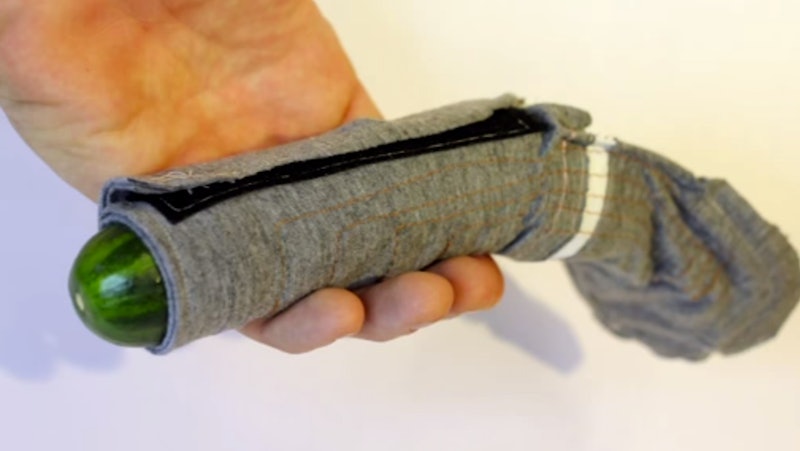 So everyone knows that condoms are important, but plenty of guys still don't like wearing them. Which is why the search for a better condom is apparently a big deal, and has led one pair of researchers to develop a prototype for a electric condom. As in, a condom with embedded wires that deliver electrical impulses along the shaft and thus provide additional sensation. It's like electrocuting your dick, but in a fun way.

The search for a better type of condom usually involves trying to make use of thinner but still durable substances. But apparently Georgia Tech's Fraz Peer and Andrew Quitmeyer thought that that approach was so last century. This is the new millennium, after all. Digital condoms are where it's at. And so they built one. And have apparently tested the thing on themselves, bless them.

The device, called the Electric Eel, is still in the very early stages, but if it ever evolves beyond a cloth sleeve wrapped around a cucumber, it could revolutionize condoms. After all, haven't you ever wanted to control a condom remotely? Or, you know, doesn't that sound kind of cool now that you've thought about it? Though I'd be at least a little worried about the guy electrocuting the both of us if something goes wrong. I mean, they say the amount of charge is perfectly safe, but still...I mean, it's electricity, right?

The Electric Eel itself is still in the early stages of research and development but the possibilities here really are pretty interesting. If people can control this thing remotely, then that opens up a lot of...possibilities. And God help you if it gets hacked. But hey, I guess it's still less weird than that robot hand job device from a few months ago.

The developers have just launched an IndieGogo campaign to help them fund their further research. So if you're into the idea of a digital condom at some point in your future, go ahead and throw them a few bucks. If you donate $350 or more, you get a handmade Electric Eel.