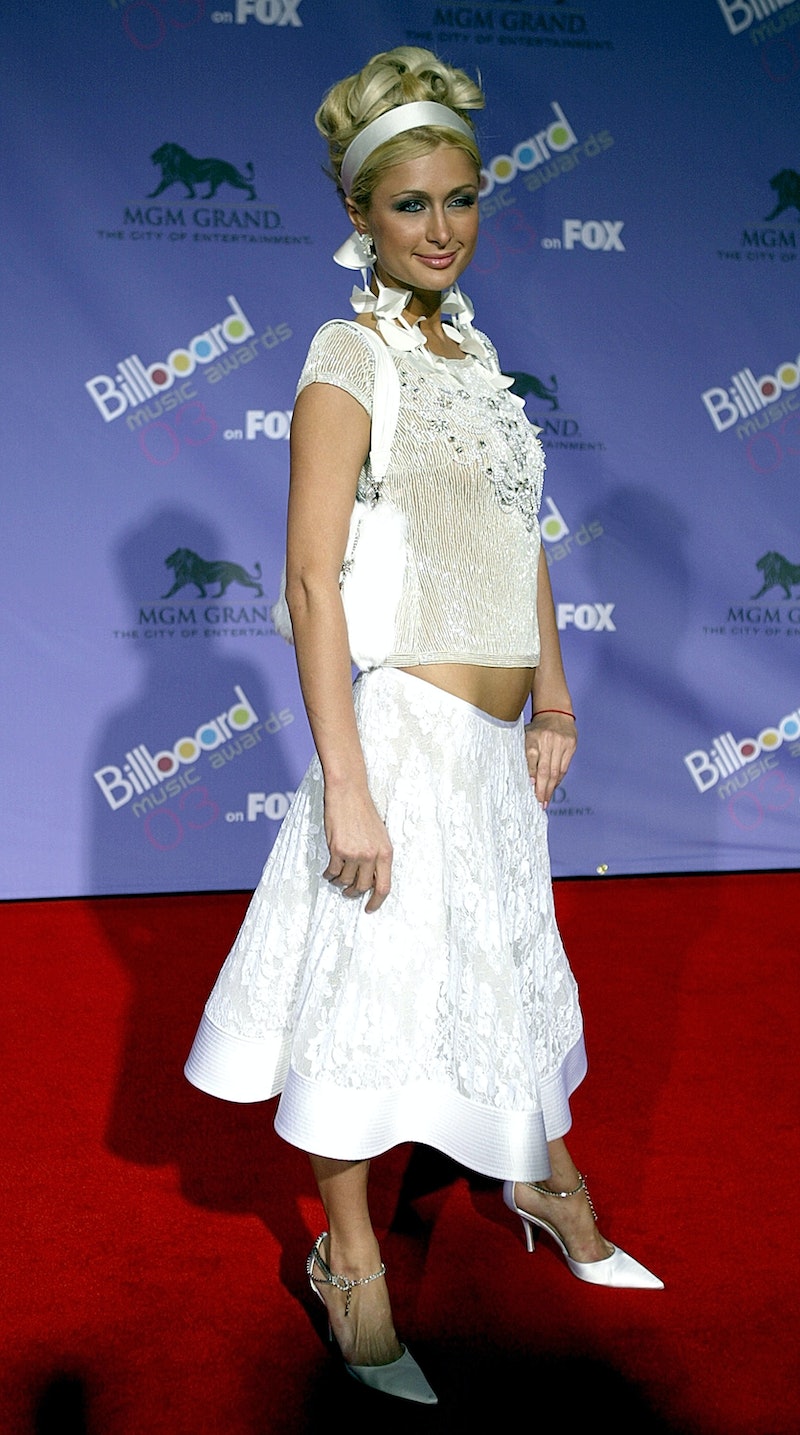 Ah, the early aughts: A time when butterfly clips and bottle cap belts were in vogue. While the 2000s are known for many a fashion faux pas, 2003 is arguably the best year of not-so-subtle early 2000s fashion, and Paris Hilton at the Billboard Music Awards proved it. At a time when mini purses and low slung skirts reigned supreme, it only made sense to crown Hilton the Queen of the most early 2000s outfit on the Billboard Music Awards red carpet.

From TV sensation Mischa Barton’s one-shouldered silk mini to Avril Lavigne’s skater girl style, deciding on the most 2000s outfit in Billboard Music Awards history was not an easy task. In the end, I came upon a picture of Hilton with a curly up-do, sporting a fur purse and color-coordinated outfit. While I was hesitant to choose Hilton as the wearer of the most 2000s outfit — as she only sported the girliest trends of the time — I couldn’t pass it up. Her look was the stuff I dreamed of in middle school. In fact, I think I might still have a pile of low slung midi skirts hiding in the back my closet. In a sea of jean jackets, baggy pants, and rouged dresses, Hilton stood out in rhinestones and fur a plenty.

To elevate her seemingly casual white midi, she paired it with a heavily embellished white tee for a black tie meets going-to-the-mall kind of look. She then accessorized her ensemble with rhinestone-embellished heels, a mini fur purse, and the celebrity must-have accessory of the time, a red string Kabbalah bracelet. To top things off even further, she went for a curly up-do and a ruffly ribbon combo.

While Hilton's up-do wasn't fastened by butterfly clips, it was a familiar look that many ladies of the early aughts rocked to the prom or on occasion with jeans and a tee. Like any up-do from the early 2000s, it wouldn't be complete without an accessory, hence the ribbon headband.

In stark contrast to her hairstyle, Hilton kept her makeup much more subtle. She opted for a bronzed face, smoky eye, and the 2000s makeup essential: lipgloss. Which by the way, I am willing to bet is a Juicy Tube.

The famous besties of the 2000s who starred in their own reality TV show, The Simple Life, were the ultimate "it" girls of the 2000s. Rarely seen apart at the time, they knew that a best friend is always the greatest accessory. And in this case, Paris Hilton and Nicole Richie were the perfect compliments to one another. Together they were able to take on all the major trends of the 2000s, Hilton embracing the overly coordinated girly looks of the time and Richie giving into both the glamorous and grunge trends with her denim mini and colored extensions.

While there are plenty of funky fresh looks from the early millennium, Hilton was undeniably the poster person for 2000s fashion.

More like this
Hailey Bieber’s Moody Black Mani & Vampy Lips Are Peak Fall Vibes
By Audrey Noble
Zendaya’s Sheer Valentino Look Won Paris Fashion Week
By Dominique Norman
Bella Hadid's Best Runway Looks Of All Time From Paris, Milan, & More
By Allie Fasanella
Florence Pugh Wore A Sparkly Sheer Top at PFW & I’m Not Over It
By Allie Fasanella
Get Even More From Bustle — Sign Up For The Newsletter