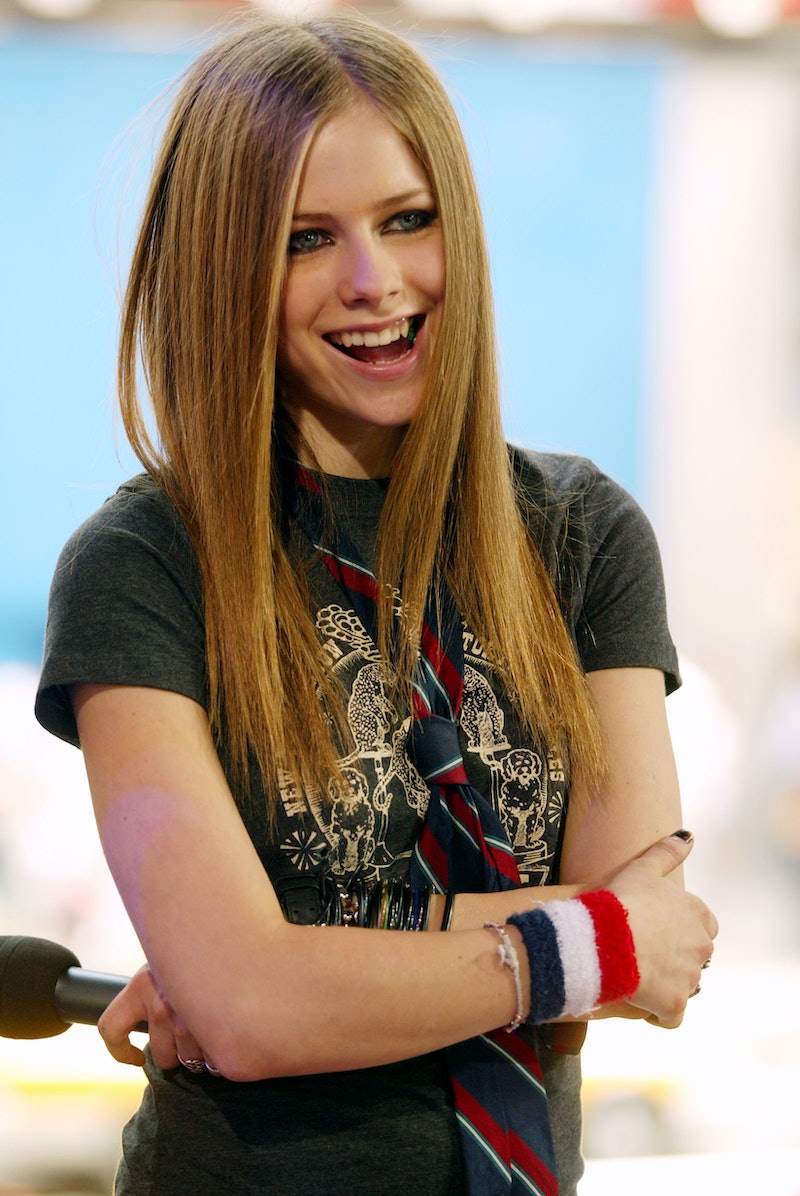 Back when I was a kid, slightly masculine or punk aesthetics were highly favorable in my eyes. As an angsty genderqueer youngster, Avril Lavigne's style spoke to me pretty loudly. At the time, I was toying with the label "tomboy," a descriptor that had been assigned to me by many of my family members and friends. Although I'd later grow to understand the problematic nature of that term, "tomboy" was my identity, and Lavigne's arguable invention of the tomboy in the early 2000s became my main inspiration for practicing androgyny.

My look for many years was limited to heavy black eyeliner and Converse-accented vibes that made me feel at home in my pouty punky body. Today, I look back now and cringe at some of the looks she rocked that I tried to replicate, from the overly excessive way I smudged my liner on, to my obsession with camouflage everything, and my overwhelming need to steal as many ties as possible from my dad.

Lavigne really played up the "I'm a punk tomboy who doesn't give a damn about what you think" persona. Although it may have been a little over the top and not aesthetically pleasing to everyone, her sartorial philosophy certainly spoke to me for many years and helped me become more comfortable with my androgynous identity. So without further ado, here are some early 2000s trends that our favorite SK8R girl started through her statement-making outfits.

No longer just a staple of overly-prepared joggers and aerobics-lovers, Lavigne made the sweat wristband an essential for any skater girl or guy amongst her fans. I know I owned about four of these.

Thanks to Avril, the only shoes I wore for years in elementary school were black high top Converse, just like the ones she rocked at every show, public appearance, and red carpet event.

Lavigne proved that a necktie can pretty much go with anything, and can be worn as more of a necklace-like accessory than a piece that accents a polished or tailored suit. I certainly followed this trend, and was overwhelmed with joy when my grandpa gifted me with a tie that was the same shade of red as the one she rocked so often.

This may have been a staple for other rockers before her of multiple genders, but Lavigne made the punk aesthetic of aging manicures a thing in pop star-dom and in my own friend circle. Black is still pretty much the only color I rock on my nails to this day, and I still embrace the unavoidable chipping.

In the early 2000s, Lavigne was a huge fan of under-eye black liner, and has only stepped up her application game since then to include more and more black pigment. Thanks to the musician, the only makeup my best friend and I rocked for years was thick black eyeliner, clumsily applied of course.

Lavigne's hair was always pin-straight throughout the early 2000s, which compelled me and many other young fans to use our first heating tool in order to match her flat-ironed locks.

Not only did she popularize camouflage-printed pants, but she also rocked camo tops and (later in her career) skirts. I have a lot of camo pants and jackets to show for this trend.

Lavigne's been rocking studded belts since the beginning of her career. Although I never personally cared for belts, I bought multiple Hot Topic studded creations just to say I owned them.

Lavigne wore dozens of black rubber bracelets at once pretty regularly. While she may not have started the trend (since everyone in the early 2000s was rocking these babies), she definitely popularized the look amongst her fans.

The star often rocked menswear, like bowties and jackets, at red carpet events. And in less formal arenas, she would sport her Dickies shorts low enough to reveal men's briefs. Her outfits definitely de-stigmatized any gender binaries she as a female pop star was likely expected to follow, which was endlessly encouraging for others who hoped to do the same.

Lavigne was a big fan of emo stars and skulls, often rocking one or both on her clothes, accessories, and even sometimes in her album artwork. This paved the way for more people to accessorize with these punk identifiers, however cheesy they may seem to us now.

Although many of these trends may be a little out of date now, let's give thanks to the pop punk queen who took androgyny to the eyes of the masses and inspired many young masculine people of all gender identities along the way.