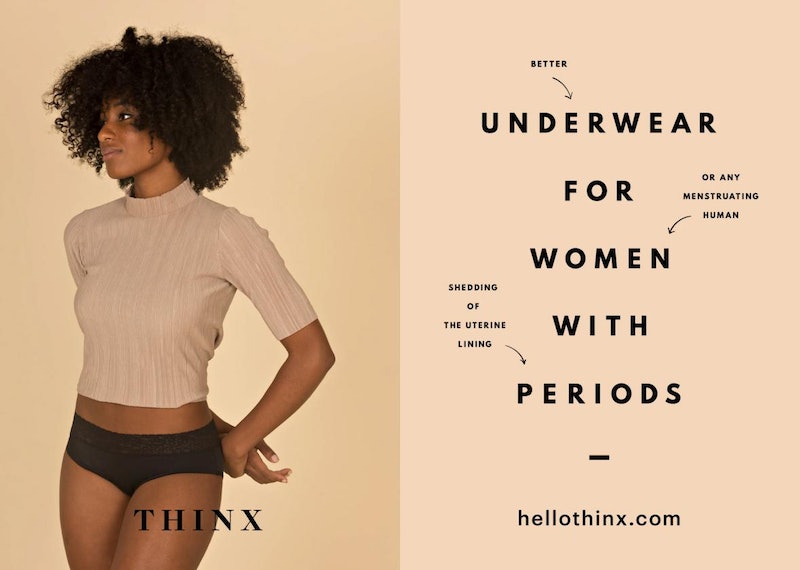 Being an active, and more importantly informed, participant in the dialogue surrounding both the global and domestic state of women's rights is a fantastic and effective way to show your support for gender equality worldwide. That said, if you're fortunate enough that you can afford to splurge a little bit for a good cause, then I have good news! You can start putting your money where your mouth is as well, because there are actually a lot of awesome, ethical, feminist companies that deserve your support.

You've probably already heard about some of the more successfully marketed feminist companies like THINX, and you might even be one of their customers already. If that's the case, awesome! I'm proud of you, you badass woman. (Also, I need to follow your example and buy myself some dang period panties already.) There are so many other feminist companies that need your support, too, though — so share the love, OK?

Whether you're looking to buy quality beer, jewelry, stationary, condoms, or feminist birthday gifts for the kiddos in your life, there's a female-created, female-run, Fair Trade, eco-friendly, altruistic, feminist company out there just waiting for your patronage. So before you hit up your usual guilty pleasure shops and sites, check out these nine super cool feminist companies. Because treating yourself while simultaneously smashing the patriarchy is a feminist dream.

If you have nieces, nephews, or children of your own, you should definitely consider buying their next birthday and/or holiday gift from Queerbook Committee. Queerbook Committee, which is run by Jacinta Bunnell, creates coloring books that support all sexual orientations and gender identities. Additionally, some of their materials, like The Big Gay Coloring Book , aim to teach kids about some of the most memorable victories in LGBTQP culture.

If you like beer, and you like supporting both female entrepreneurship and female friendship, then you might want to go ahead and plan a weekend getaway to Jackalope Brewing Company in Nashville, Tennessee. Or, at the very least, mosey on over to their website and check out some of their sweet merch — like beer soap and tall socks.

Jackalope Brewing Company has only been around since 2011, but it's founders, Bailey Spaulding and Robyn Virball, have actually been friends since back in 2002, when they were just two college kids living in Scotland. Now, the ladies have their own brewery and eight original beers which include ales, stouts, pilsners, and more. Plus, their unofficial motto is, "believe in yourself," and their official motto is, "drink legendary." Oh, and their mascot's a friggin' jackalope. What's not to love?

As we've already briefly discussed, THINX has been doing a damn good job with their marketing, so you've probably already heard of them. I still felt compelled to write about why you should support them, though, because they're kind of revolutionary.

THINX, which was founded by Antonia Dunbar and twin sisters, Radha and Miki Agrawal, is a company "committed to breaking the taboo surrounding menstruation." As if that weren't cool enough, THINX provides jobs for both Western and Non-Western women, too. The period panties are designed by women in NYC and made by women in Sri Lanka, "at a family-run factory that has an outstanding commitment to providing supplementary education and training to its female employees, empowering them to become leaders in their communities."

On top of all that feminist awesomeness, every time someone buys a pair of THINX period panties, a portion of the proceeds are donated to the charity AFRIpads, which trains women in making and selling washable pads so that girls don't have to skip school when they get their periods. YAS!

OK, so I can't vouch for Sustain's products personally, but they're the only company I've ever heard of that sells all-natural, Fair Trade, environmentally-friendly, vegan condoms designed specifically with women in mind. Plus, Sustain just might be the most socially conscious condom company on the planet.

Not only are Sustain's products natural and ethically made, but 10 percent of the company's pre-tax profits are donated to women who currently lack access to family planning, sexual education, and other basic healthcare services. I don't know about you, but personally, reading about Sustain has made me excited to spend money on condoms for the first time in my life.

I dig beer, so I just had to include one more brewery — and Stoudt's is just too awesome not to mention. Stoudt's offers 12 different styles of hand-crafted beers, it's located in Adamstown, Pennsylvania, and it was founded back in 1987 by former kindergarten teacher and mom, Carol Stoudt. Stoudt was the first woman to open a brewery since prohibition, and she managed to maintain the place while raising her five kids. (Yeah, that's right, five!) Her industry nickname is the, "Queen of Hops," and evidently, her coolness knows no bounds.

If you like pretty things, and you like it when your fashion helps marginalized women in countries like Ethiopia find access to safe jobs, healthcare, and education, then you need to shop at Raven + Lily. They're a little pricey, but if you can afford it, consider it.

Raven + Lily was born because it's founder and CEO, Kirsten Dickerson, wanted to combine her passion for social justice with her love of fashion. Before founding Raven + Lily, Dickerson spent 15 years dividing her time between styling work in the film industry and working with global non-profits, like Compassion International. Raven + Lily currently helps employ over 1,500 marginalized women worldwide, and their merchandise is the stuff of ethereal daydreams.

I realize stationary is kind of old school. Personally, I don't think I've used the stuff since I graduated high school back in 2008, because Facebook. Even if you don't use stationary, though, you should still check out Flora Stationary. In addition to notecards, Flora Stationary sells beautiful coloring books, journals, pencil bags, and prints. More importantly, though, Flora Stationary is a nonprofit organization, and their products feature original artwork from students in Kosovo. Twin sisters Ashley and Victoria Vanbsukirk founded Flora Stationary as a way to provide Eastern European women with access to a college education. By donating a portion of the profits from every sale, Flora Stationary is able to support young women for an entire semester of college.

To this humble blogger, Future Glory Co. is downright expensive. If you're fortunate enough that you can afford to drop a few hundos on a bag, though, then you should consider browsing Future Glory Co.'s catalog. Not only are all of Future Glory Co.'s items handmade in San Francisco, (where Theresa Lee and Jennie Chen founded the company), a portion of every purchase is donated to local organizations that are committed to helping female victims of sexual exploitation and domestic abuse.

Goldieblox is a toy company that wants to get more girls interested in STEM (Science, Technology, Engineering, and Mathematics) fields. The company is engineering-based and was founded by Debbie Sterling — a leading voice in the movement to encourage girls to pursue the historically male-dominated fields of engineering and technology. It's no wonder the video above went viral — this is one awesome, feminist company.

More like this
Got Brain Fog? Here Are The Best Supplements For Memory & Cognition
By Carolyn Steber
Pro Footballer Zander Murray Is "Blown Away" By Support After Coming Out
By Sam Ramsden
7 Symbolic Meanings Of Autumn — From Letting Go To Self Preservation
By Kirsten Nunez
Trainers Reveal When It's Better To Run Before Or After A Workout
By Carolyn Steber
Get Even More From Bustle — Sign Up For The Newsletter