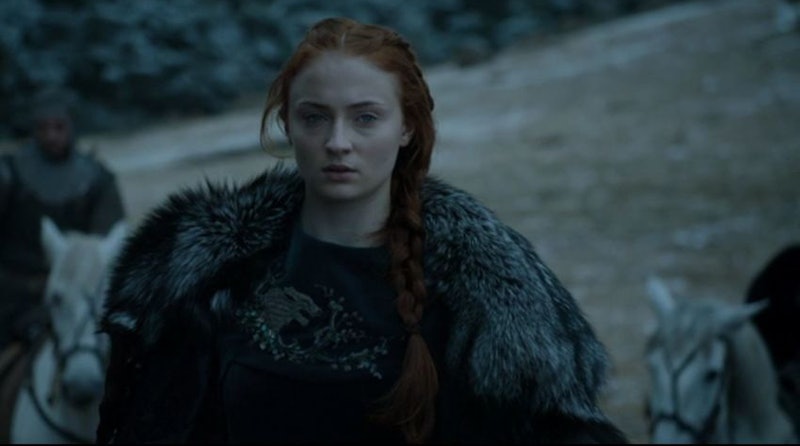 May 22's Game Of Thrones episode "The Door" really hit most of us hard in the hearts — emotions and stakes running at an all-time high. One of the things I found especially poignant about this episode, however, was the amount of symbolism that went into the costumes, specifically for Sansa Stark and Jon Snow.

Before I was consumed by ugly tears after witnessing the heartbreaking final sequence of the episode, I was happily enjoying the scene between Sansa and Jon as they prepared to leave The Wall and gather an army. The duo intends to take back their childhood home of Winterfell. It's an understatement to say that these two have been through a rough lot. We've seen them struggle. We've seen them tortured. We've even seen one of them murdered. The moment when Sansa and Jon finally unite and gather their strength as both a family and a house is extremely satisfying for these reasons.

In the aforementioned scene from "The Door," however, the fashion presented takes on an extremely metaphorical role. Jon notices that Sansa is wearing a new dress: A dark gown with the Stark house sigil, the direwolf, embroidered on the chest like a badge of honor (along with a wolf pelt decorating her cloak). When Jon notices her dress, Sansa comments, "I made it myself. Do you like it?" Jon then replies, "I like the wolf bit." In response, Sansa adds, "Good, because I made this for you." She then hands her half brother a wolf-pelt cloak with the Stark direwolf sigil etched in the crossed black leather straps holding the piece together, adding, "I made it like the one father used to wear."

Sansa giving Jon that cloak spoke volumes. Not only was she proudly showing off her position as a Stark and representing the strength and power of her house by wearing the direwolf sigil, but she was also communicating to Jon his own position as a member of House Stark: the leader.

Jon has grown up a bastard child, always reminded that he was only "half" Stark and never truly feeling like a full part of the family. By giving him a cloak "like the one father used to wear," Sansa affirmed that he is her brother and a crucial member of the family, while also suggesting that it is up to him to take the place of Ned as the head of the house.

"Jon is Jon. He's my brother, he'll keep me safe. I trust him," Sansa said of her brother to Brienne Of Tarth. With both Starks embracing their sigil once again, their bond, loyalty, and care for one another can only be solidified. It's time for the Stark siblings to take back The North.