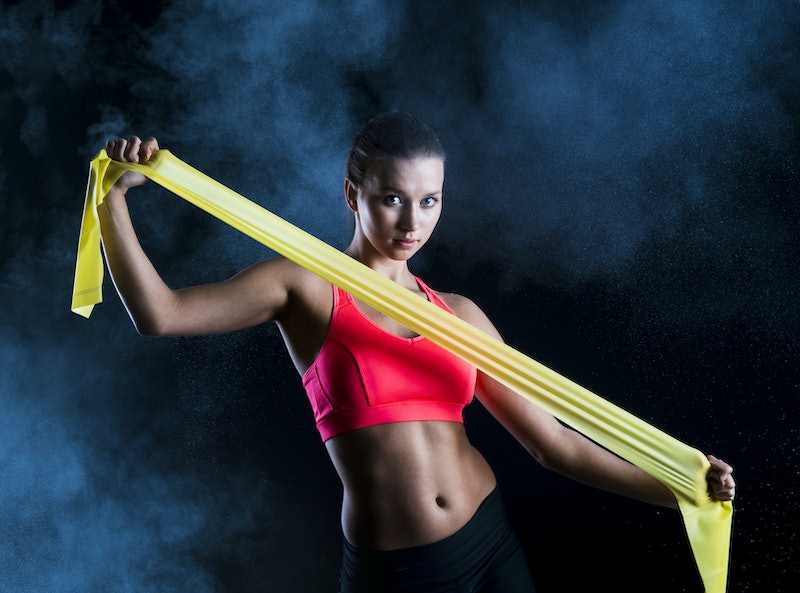 It's hard to stay fit away from a gym. How do you squeeze in a workout during a vacation? What if this week you'd rather sweat in the comfort of your own living room, thank you very much? Meet the resistance band, a tool that will give you a gym-quality strength workout anywhere, and has a lot of other perks besides. "Resistance bands are easy on the joints, light, portable, and come in a variety of sizes and strengths to challenge everyone from newbies to gym buffs," says Meka Gibson, personal training manager at David Barton Gym in New York City. Gibson shared her five favorite moves to sculpt serious muscle. "Aim to do 10 reps of each move below, three times a week, and increase band resistance for a bigger challenge if you need to," she says.

Loop your resistance band around a sturdy piece of furniture or doorknob so that it is slightly higher than waist level. Hold one end of the band in each hand at arm’s length and shoulder level, stepping back until there is tension in the band. Begin by squeezing the muscles along the upper and lower back toward the spine, then pull the band toward you with both arms so your elbows bend behind your back. Hold for a count and then return to start. "Be sure to keep the shoulders down away from the ears and the abs engaged," says Gibson. The row will work the entire back.

Loop the resistance band around a sturdy piece of furniture so the band is at chest level. Instead of facing the band, turn around and face out, back to the furniture, holding one end of the band in each hand. Take one step forward until you feel some resistance on the band and position the feet in a staggered stance with one foot in front of the other. Inhale and bend the elbows until they are at 90 degrees, either at your sides or out to the side. Exhale and extend the arms out in front of you. Return slowly back to start. That's one rep. Alternate feet after each set.

Step onto the band with both feet, a little more than hip width apart. Take one end of the band in each hand and pull it up on both sides until your hands are at shoulder height, elbows pointing down, and the band is taut. Perform a slow squat by bending the knees and the hips simultaneously as if you are going to sit on a chair, keeping hands at shoulder height. Return to start. "With a squat, you want to make sure hips and knees bend naturally so you're not putting to much pressure on either," says Gibson. "You can practice by sitting on a chair that allows knee to be bent at 90 degrees."

Holding the band in both hands, place one foot on the center of the band. Step back with the other foot and lower the knee so that both knees are at 90 degree angles. At the same time, curl both arms up. Hold for a count of 10, then stand back up. That's one rep. Complete a set on one side, then switch legs and repeat.