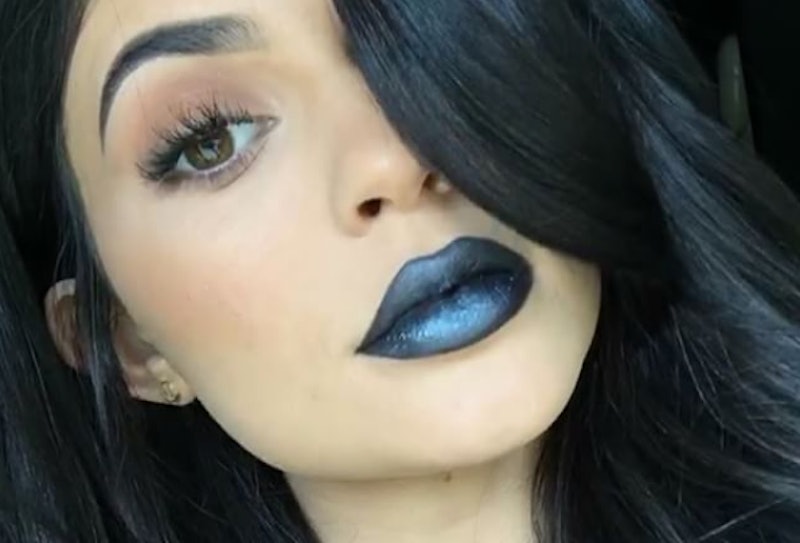 Stop what you're doing, because a new Kylie Cosmetics shade is here! Jenner might have been on a role with her nude colors for a while, but now she's combining two unconventional aspects in to one shiny dark lip hue. What is the Kylie Cosmetics black lipstick called? The name is in keeping with her royal theme.

Jenner recently asked her fans on social media what color they'd like to see in the next liquid lipstick launch, and it looks like she was really listening. Tons of Kylie Cosmetic fans said they wanted to see a black lip kit, and now their dreams have come true in more ways than they could possibly imagine. Not only did they get the new black liquid lipstick, called Majesty, added to the collection, but it also has metallic blue undertones. Not too shabby.

Why did Jenner name her new shade Majesty? So far it's not clear, but my guess is it's because that gorgeous shine is fit for a queen. She could have easily just created a matte black hue, but she's constantly going above and beyond for her fans. Jenner gives the people what they want, plus a little more, which makes her makeup stand out among the rest.

Just look at that shine! After one look at the hue, you'll realize that Majesty is the perfect name.

I never thought that I'd rock a black lipstick, but this looks totally wearable. While a matte black sometimes sits heavy on the lips, this has just the right shine to make it look different from every angle. It's not like anything I've ever seen before.

When the flash turns off, the liquid lipstick turns into a much darker hue. It's gorgeous with or without the light, and I'm willing to bet it'll sell out fast. The official release date hasn't been announced yet, but the Kylie Cosmetics caption says to check Snapchat to find out.

More like this
Billie Eilish Teased The Debut Of Her New Fragrance
By Audrey Noble
12 Bellissima Beauty Moments From Milan Fashion Week S/S 2023
By Olivia Rose Ferreiro
15 Must-Have September Beauty Launches, According To Our Editors
By Rachel Lapidos
This Week’s New Makeup Releases & More Beauty Headlines
By Audrey Noble
Get Even More From Bustle — Sign Up For The Newsletter