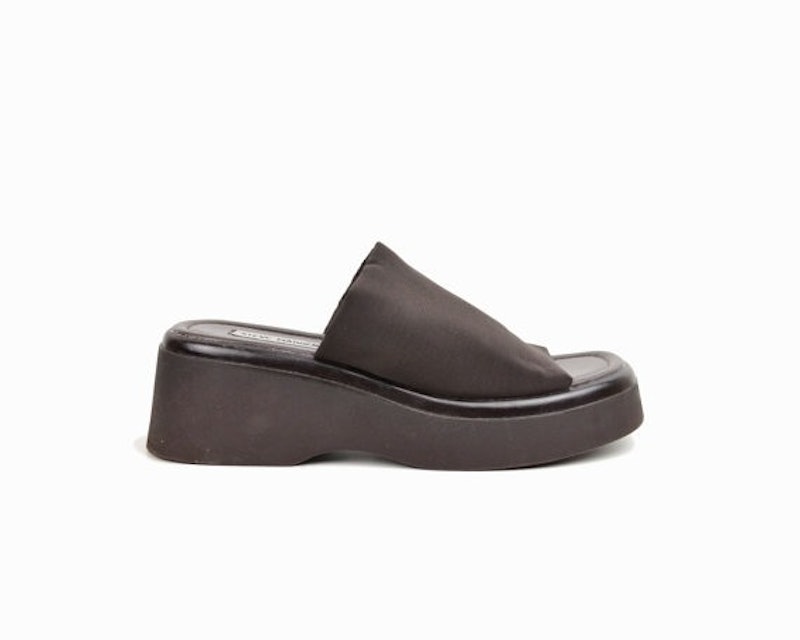 During the late ‘90s and early 2000s, there were certain things you could wear that would automatically make you cool. One such style was the stretchy Steve Madden sandals that almost every woman and girl you had ever known was coveting. These were akin to body glitter, low-rise jeans, and bandana tops: You likely couldn’t explain why you wanted them, but you wanted them more than a make-out session with the most popular kid in your school nonetheless. Maybe you would have swapped all the Steve Madden shoes in the universe for a date with Leonardo DiCaprio circa his Titanic era, or bad girl Nancy from The Craft. But that was still a big maybe.

The thing about these unusual stretchy kicks was they suited anyone, of any style. Of course, we can all make a garment or pair of shoes our own through clever styling. But if you preferred to dress in the aesthetic of a particular subculture, these sliders wouldn’t look out of place in your ensemble. They could be worn by the likes of Clueless fashion followers Cher and Dionne, or even Tai before she underwent her makeover.

Clearly, these sandals were adored by many. So how much did we love those Steve Madden sliders? Let me count the many reasons they colored our obsessions.

1. They Gave Us Some Height

Hurrah! Finally a cool shoe that could give us some extra inches. Chances are that if you wanted to rock a heel, you were only allowed to wear kitten ones — which were so babyish. These sliders were a huge step up into the land of cool, mature footwear.

2. They Were The Only Platforms Our Parents Would Let Us Get Away With

The '90s saw the resurgence of the '70s platform and celebs like Baby Spice took the look whole new levels. Of course, your mom probably wanted to spoil all your fashion fun, so there was no way she'd let you wear skyscraper-high sneaker platforms.

However, after much whining on your part, she compromised on these stylish flatforms. You could then use this compromise as leverage in an attempt to get your own way down the road: "Remember the time you wouldn't let me get platforms like Baby Spice? Well, mom..."

3. We Felt Like Rockstars At The Mall In Them

Everybody recognized a Steve Madden slider a mile off, and crowds would (metaphorically) part just to let you pass by when you wore these sandals.

4. They Looked Awesome After Being Worn In

Much like other iconic shoes, such as Converse and Birkenstocks, the classic Steve Madden sliders somehow looked even more amazing after you'd worn them in. This was probably because the wear and tear made it look as though you'd had them for ages, which subsequently made you seem like a real trendsetter.

5. They Came In Different, Quirky Styles

If you wanted to stand out from the crowd, you could pick up a pair of leopard print sliders. If you preferred to play it safe, you could choose a pair of classic black ones. The choice was yours!

6. They Were An Excuse To Get A Pedicure

You couldn't wear these sandals with chipped nail polish! Especially not to a party or when visiting your grandparents. Your mom would just have to treat you to a mani-pedi to solve this conundrum.

7. They Were The Coolest Shoes We'd Ever Laid Eyes On

There was something about all Steve Madden shoes that made the eye linger. They were unlike any other kicks in the '90s and kind of monstrous in an edgy, high fashion way. There was simply no substitute for these sandals.

8. We Could Simultaneously Appear Grungy & Trendy

Finally! Footwear that didn't pigeonhole you into a particular style. These sliders meant you could look grungy one day and trendy the next, or go for a look that was somewhere in between. Nobody could put you in a box when you were wearing a pair of Steve Madden stretchies.

9. They Were Unusually Comfortable

Being a pair of flatforms rather than heels or wedges, these sandals were super comfy. You often forgot you were wearing them until someone asked, "Are those Steve Maddens?" To which you would reply with the coolest of silent nods.

As soon as you got a pair of these spellbinding shoes, others would look to you for style advice or help picking an outfit. These shoes transformed you into sartorial royalty.

11. Most Feet Could Flaunt Them

Due to their stretchy, singular band, these incredible sandals could be sported by most feet, no matter your foot's width. These were the sandals to rule them all.

If you missed out on these Steve Madden sandals the first time around, you might be lucky enough to find a pair on eBay or Etsy today. There are also some modern Steve Madden styles out there that are super similar, if you can't bag a vintage pair in your size. Happy hunting, shoe lovers.

More like this
Netflix Reveals First Look At Wednesday In The 'Addams Family' Spinoff Series
By Bustle Editors
A New 'And Just Like That' Table Read Pic Confirms A Key Character's Return
By Jack Irvin and Grace Wehniainen
Prefer Alcohol-Free Perfumes? Water-Based Fragrances Are On The Rise
By Audrey Noble
12 Absolutely Angelic Cherub Tattoo Designs
By Paris Giles
Get Even More From Bustle — Sign Up For The Newsletter