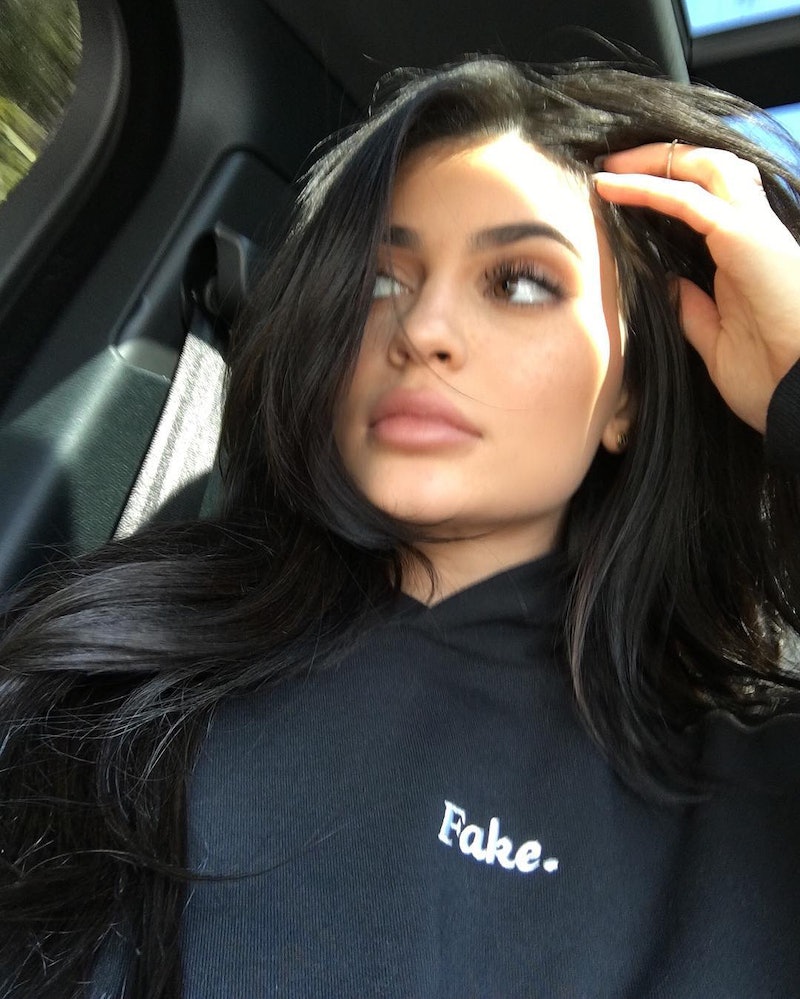 Call it the Kylie Jenner Effect — what she wears, her fans want to buy. Basically any item the reality star posts on her Instagram or Snapchat will sell out quickly, and for good reason. The teen tycoon has some seriously fun fashion sense, and she's all about wearing pieces that showcase her personality. So when she posted a fun sweatshirt on Snapchat and Instagram, I had to know where to buy Kylie Jenner's fake sweatshirt, stat.

The reality star posted first on Snapchat while wearing the sweatshirt, then posted an Instagram later than had it showing as well. It's a simple black hoodie with "Fake." written in simple white font. Jenner captioned her Instagram "pretty much." Although that totally makes me wonder what she's referring to (Is Jenner calling herself fake? Other people? Her family's TV show? What is this all about?), I also kind of wanted to buy the sweatshirt immediately.

Luckily, it's pretty easy to find. The adorable sweatshirt comes from the Australian brand ksubi, and it's going to debut in its Fall/Winter 2016 collection. You can luckily already buy the sweatshirt online, and judging by how popular Jenner is, I have a feeling they may sell out soon.

It looks so cute on her, right?

Here's the Snapchat video that shows Jenner wearing the sweatshirt as well.

I'm 99 percent sure she's also wearing it in this Snapchat as well, but you can't tell for sure.

You can order it now online from General Pants, and it'll also be open in the store's retail locations. At $150, it's a little pricey, but it also looks so cute and comfy. And who wouldn't want a cheeky message on their everyday hoodie?

More like this
Kylie Jenner Goes Into Labor & Welcomes Her Baby On 'The Kardashians'
By Jake Viswanath
How To Wear A Bucket Hat Like Rihanna, Dua Lipa, & More
By Allie Fasanella
Serena Williams Looked Like Royalty In A Bodycon Velvet Dress
By Allie Fasanella
Hailey Bieber Is Making Cargo Trousers Work — Here’s How You Can Too
By Catharina Cheung
Get Even More From Bustle — Sign Up For The Newsletter