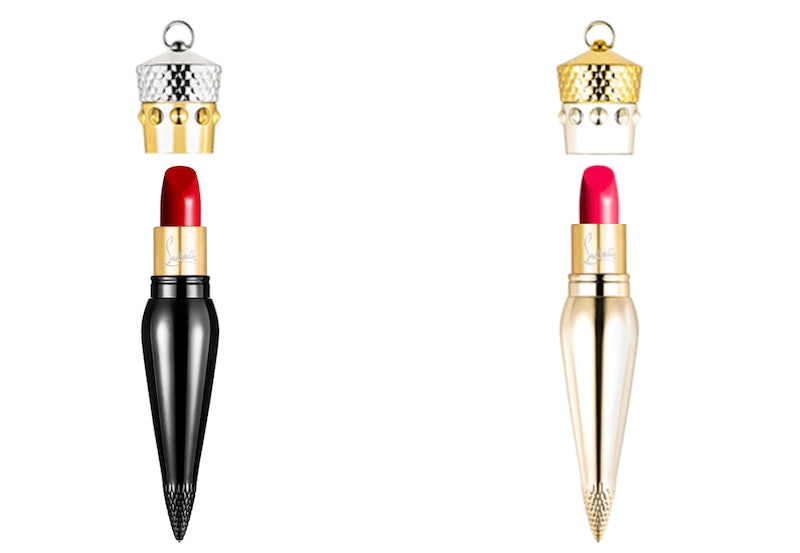 I've been preaching about the comeback of lip gloss. From the megawatt shine of Kylie Glosses to Lancome's Juicy Shakers, reflective lips are a thing. So, is it possible that another big brand is hopping on the trend, and that Christian Louboutin is doing lip glosses, too? A Twitter post by popular beauty account Trendmood might suggest that very thing. If it's true, a new addition to the Christian Louboutin beauty collection, which is dubbed Christian Louboutin Beauté and already includes nail polishes with stiletto-like wands and Silky Satin lipsticks in teardrop-shaped tubes, would make sense.

Blindingly shiny glosses would be a logistically sound addition to their makeup offering, since the brand is known for crafting the most dangerously sexy heels in existence. But on the other hand, maybe Louboutin could be doing liquid lipsticks, since texture and pigment are currently he dominant lip trend.

Christian Louboutin Beauté began in 2014 with the release of a nail polish collection. At the time, Fashionista reported that the brand would be expanding into other makeup categories, which it did soon after with the release of its first lipstick. Who's to say what will come next?

The brand declined Bustle's request for comment on future lip offerings, but there's no way whatever they release in the future won't be awesome. Just consider the brand's existing lip products, which are absolutely fabulous. Back in August 2015 Christian Louboutin added a lipstick range to its beauty line-up.

As you can see, this isn't just a tube of lipstick — it's a work of art. When the brand first entered the beauty sphere in 2014 with the release of a nail polish range inspired by the designer's famed high heels, Louboutin told WWD “If I do beauty, I have to do it my way. I am someone who likes objects.”

We'll have to wait and see if glosses or liquid lipsticks are on their way.

Editor's note: This post has been updated from its original version.

More like this
Does Valentino’s Twin Liner Live Up To The TikTok Hype?
By Olivia Rose Ferreiro
Jecca Blac’s New Brow Drop Was Inspired By Your Fave Drag Queens
By Justine Knight
How To Get Your Hands On The Pat McGrath X Supreme Nail Kit
By Justine Knight
15 Talc-Free Makeup Brands For Safer Eyeshadows, Powders, & More
By Audrey Noble
Get Even More From Bustle — Sign Up For The Newsletter