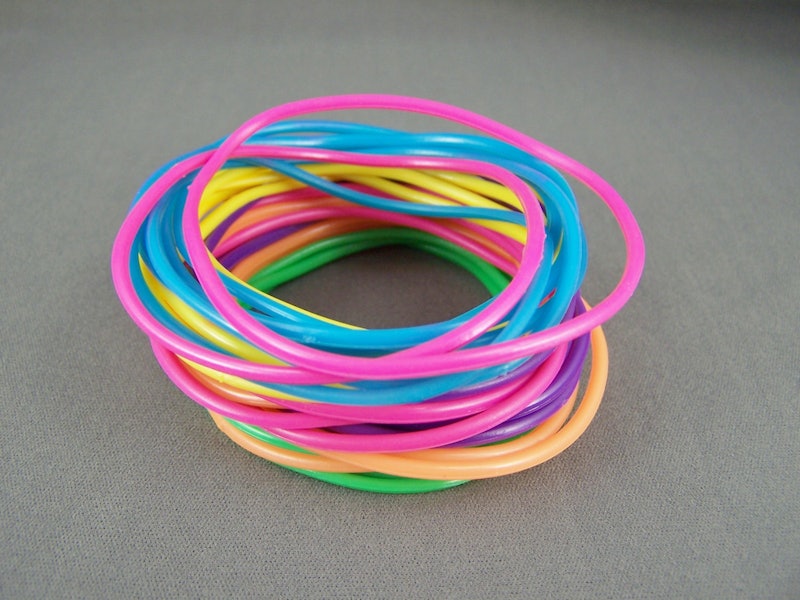 There were plenty of weird things about middle school in the early 2000s. Back then, many of us were fascinated with telling the world how "juicy" or "angelic" our butts were, Fergie was professing that big girls don't cry, and Kelly Clarkson wanted young women everywhere to know that there was nothing quite as fulfilling as being Miss Independent. All the while, we were sporting rainbow jelly bracelets in junior highs across the country.

For some, they were a fashion statement. For others, the black ones were a symbol of the counterculture and emo vibes. For most, every bracelet correlated to a sexual act that you were either confessing to having under your belt or agreeing to perform, should it be ripped off.

In my own school district, these creepy pieces of sex jewelry were especially prominent in the seventh and eighth grades — when the vast majority of us were about 12 to 14 years old. Although some of us were already having sex, it was pretty rare. We lived in a township of 25,000, many of whom were weekly attendees of the local Catholic, Baptist, and Lutheran churches. Beliefs in the sanctity of marriage and the sinfulness of fornication were shoved down our psyches, both in school and out. Leaving religion out of the classroom never occurred to anyone. And so it wouldn't be until the middle of high school that most kids I knew starting letting go of those beliefs enough to have sex. But I guess we all liked to pretend we were doing it before then anyway.

According to NBC, with research from Kinsey Institute and California State University, "The average [American] male loses his virginity at age 16.9; females average slightly older, at 17.4." This is pretty comparable to somewhere like the UK, where "the average age of first (heterosexual) intercourse is 16." Ultimately, this means most folks aren't doing the dirty in junior high, no matter what their jelly bracelets might be trying to convey.

What I find particularly distressing about these bracelets is not that we were talking about sex, or even that we were utilizing a tangible prop as a means of doing so. I'm pretty sure teenagers are supposed to do such things. And after puberty, our biological need and/or desire for sex is obviously heightened, as is our curiosity about it. Nor does the thought of young teenagers having sex make me feel uneasy. I really do believe that some people are ready for sex at a younger age than others, and everything related to our libidos is subjective.

What was especially creepy was the pressure so many people seemed to feel to act as though they had experience, or would at least be willing to acquire some, before so many of them were actually ready to lose their virginities in the backseats of cars or in the woods outside of the local park. Before a lot of girls were ready to give the boys from history class some blowjobs behind the staircases should they pull off a blue jelly. Before those same boys from history class were ready to clumsily attempt to eat out the girls, licking their vulvas with fervor because they had no idea what a clitoris was.

"Why did we do this? Why?" asks Bustle's TV Editor Samantha Rullo when I remind my co-workers about this old trend. "My school [also] did a thing with bracelets you made out of a rubber thing in the cap of soda bottles, and more of them meant you did more things with boys." Our office's resident British person and senior news editor Jenny Hollander chimed in to add, "This country, man." One of Bustle's associate fashion and beauty editors, Olivia Muenter, also says, "All I know is that I wore them, but was definitely not having sex. And they ripped all my arm hair out."

While I know this isn't true for everyone, nor am I suggesting it should be, I personally wasn't ready to have sex until after high school, let alone in middle school. Bratz dolls decorated my room, and I'd spend many of my evenings pretending that they were backup dancers on Hilary Duff's Metamorphosis tour. I had kissed boys, and one girl. I knew I was interested in dating. But sex? I hadn't even learned how to put a tampon in.

Westword, a news and lifestyle site based in Denver, Colorado, created a definitive list of the many meanings of jellies back in 2009. According to the publication, these were the acts behind some of the most popular colors:

Another somewhat distressing issue was simply that it was most often the girls who were expected to wear the bracelets — an early lesson in the expectation placed upon women to prioritize sexually gratifying the men around them without asking for a whole lot in return. Except for oral sex in the event of a green jelly.

That said, these jellies were also simply a style statement for a lot of young adolescents. I know I particularly loved the black ones after entering my emo stage and falling madly in love with Gerard Way. As Bustle associate news editor Celia Darrough tells me, "To me, they were more of a 'punk' or scene thing to do, not a sexual one. I remember finding out this sexual thing years later and being horrified. When I wore them, it was because I thought it made me punk."

That's certainly what they were for me. As a young emo, I was looking for ways to connect with the subculture and show my love for MCR on my sleeve. But if it just so happened that the kids in school mistook my fashion statement for notes on my sexual repertoire, so be it. Honestly, it made surviving in the hell hole that is middle school quite a bit easier.

Nonetheless, some schools started banning jelly bracelets altogether. They were deemed disruptive and inappropriate, I guess. Looking back, the most inappropriate thing about them, IMO, was just how quick we were to want to ditch childhood in exchange for experiences we felt were more adult. I think that might have been the crux of the matter. Jelly bracelets symbolized sex. Sex symbolized maturity. And maybe majority symbolized being one step closer to moving out of parents' houses and living on our own.

Whatever the reason, I'm just not entirely sure that choosing sexual partners — particularly at such a young age, and regardless of gender — should come down to who pulls off a rubber bracelet from your wrist the fastest.

More like this
Netflix Reveals First Look At Wednesday In The 'Addams Family' Spinoff Series
By Bustle Editors
Kenan & Kel Just Reunited At The 2022 Emmys & Twitter Is Overjoyed
By Grace Wehniainen
15 Offensive AF Jokes In 'Friends' That Really Aren't OK
By Tolly Wright, Bustle Editors and Meguire Hennes
The 19 Best Tweets & Memes About Bisexual Awareness Week
By Lexi Inks
Get Even More From Bustle — Sign Up For The Newsletter