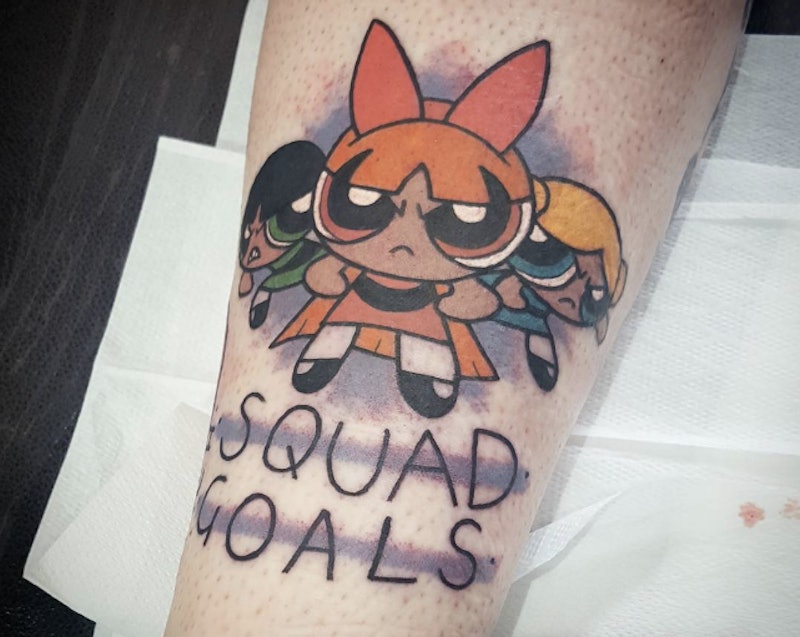 Although there's a huge focus on '90s culture at the moment, there's a lot to be said for growing up in the early 2000s. Since fashion is cyclical, my guess is that revamped trends from the 2000s are just around the corner, including early 2000s themed tattoos. In 2016, it's predicted that a handful of early '00s trends will make a comeback. One such trend that's already begun being resurfaced from the nostalgia pool is low-rise jeans, with high-waisted styles set to retire after their time in the spotlight. But what about tattoos?

Tattoos have evolved through the decades, yet an emerging trend in recent years has been to get your favorite childhood cartoon characters inked onto your skin, or give a nod towards a beloved TV show or movie from when you were growing up. Our generation seems obsessed with looking backwards rather than forwards and it appears the world is becoming aware of our retrospective attitude.

There are plenty of satirical videos out there that poke fun at Millennials for documenting every aspect of their lives — such as Instagramming every meal we eat. Sia even named her upcoming tour "Nostalgic For The Present," which seems to perfectly sum up the existences of Generation Y. So if you wish to be reminded of simpler times whenever you catch a glimpse of your ink, here are some rad tattoos that early 2000s kids will love.

1. The Spirited Away Style

Unless you were really into anime from a young age, chances are the 2001 movie Spirited Away was the first Studio Ghibli film you saw. This gorgeous tattoo of Haku in his dragon form — drawn by a talented tattoo apprentice — will make you want to binge watch the whole Studio Ghibli collection.

Only true fans of The O.C. will know that Seth Cohen's sailboat, Summer Breeze, was named after Summer Roberts. This subtle tat would be great for lovers of summer and The O.C. alike.

Running from the late '90s into the early '00s, Dexter's Laboratory was a fun-filled TV show that followed Dexter and his scientific experiments that often went awry. Dexter's sister Dee Dee was a slight hindrance to his plans, but she was funny and endearing nonetheless.

Gamers who were obsessed with The Sims will recognize this green crystal immediately. The plumbob was a symbol that highlighted which character you were controlling, but of course you knew that already.

The Legend Of Zelda: Majora's Mask was released in 2000, much to the happiness of kids who'd played their older siblings' The Legend Of Zelda: Ocarina Of Time on their Nintendo 64s. This super cool tattoo, drawn by Jesus Diaz de Portugal, makes a nostalgic nod to the wearer's childhood, while simultaneously looking really beautiful.

Want more nostalgia? Check out the podcast below, and be sure to subscribe to The Chat Room for more inspo!

Fans of Mean Girls will adore this grool tattoo that makes a reference to Cady Heron's accidental word mashup.

8. The Buffy The Vampire Slayer-Inspired Ink

Can we all just take a second to marvel at this deadly Buffy tattoo that encompasses many references to the show and ties them all up in a pretty bow?

With the dust just settling from the launch of The Powerpuff Girls reboot, there's probably no better time to get this rad squad goals design.

If you played games from the Final Fantasy franchise and you were a kid in the early '00s, you might have started with Final Fantasy IX. It was such a fun and emotive game. Although it was technically for teenagers, you probably got the hang of it pretty fast; any difficult concepts drifting over your head as you enjoyed the gorgeous graphics. This beautiful tattoo is a reference to Dagger's pendant.

You inner '00s kid will be dying to get inked with designs like these. At least there are some pros to being an adult.