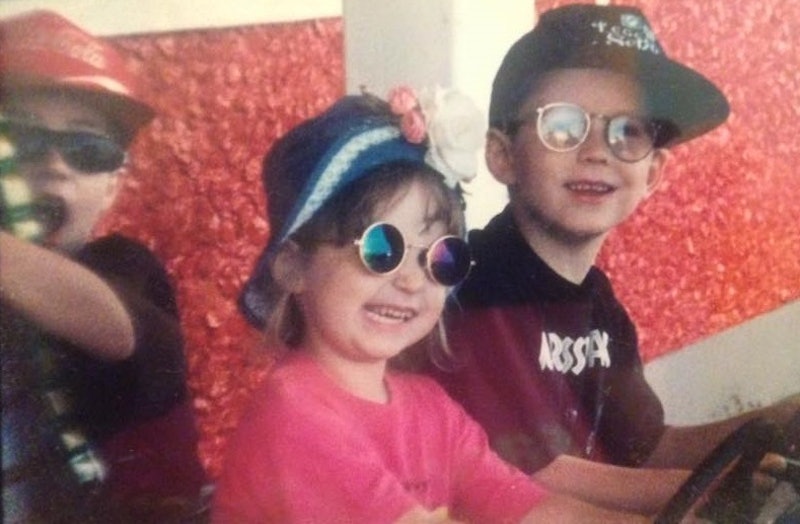 Even as an adult, I have silly style rules for myself that have stuck with me since elementary school. "Try to wear one glittery thing a day," for example, is an arbitrary guideline I've crafted that doesn't really make much sense. I'm sure other people have these, too. Whether garnered from glossy magazines or at teen sleepovers, there are plenty of so-called sartorial rules we learned as children in particular that just kind of stick with us when it comes to getting dressed each morning as grownups.

Sometimes, these rules are totally harmless: Just a bit of frivolity, or even a great way to carve out outfit shapes, silhouettes, or styles we adore so we can always remain comfortable no matter our garb. Other times, these rules can shape our entire sense of dress. Just think of your friends who refuse to wear bright colors, or those who could never forsake the heel, no matter the occasion.

But sometimes — and arguably more often than not — these rules spread from mother to daughter, sister to sister, or BFF to BFF can have harmful consequences. They can block self-expression, they can breed monotony, they can be fat-phobic, and they can even be misogynistic. As with so much of the fashion industry, critiquing and dissecting a style rule can prove it to be subconsciously damaging to the kids we were and the adults we're becoming.

"Eyes or lips" is one of the first rules I learned about makeup, and probably the first that I eschewed as soon as I became obsessed with John Waters' films. "Only one pattern," "only one statement color," "don't wear pink and red together," are amongst the so-called guidelines that limit self expression. They might not seem outwardly harmful, but they prohibit experimentation at an age when we might need it the most.

If Freud was allowed to make up penis envy, I believe it's in my right to dissect the damage that a lack of personal expression can potentially have on children. As a teenager, my mom let me dye my hair at age 12 and get a lip piercing at 15. As she has always told me, "Your appearance was your self-expression." And it still is today.

I struggle with the parents who set limits on children's creativity in regards to clothing, because it arguably teaches them that how they want to express themselves is inherently wrong. Maybe that's my more liberal upbringing talking, but when you're 13 and you have a million hormones coursing through your body, a million teenage problems, and a million pseudo-rules inflicted on you, dyeing your hair black might just be the best catharsis for all that emotion.

"Legs or breasts, never both," is another rule I heard reiterated through puberty, in mall dressing rooms and reinforced by the media, with headlines along the lines of "Kim Kardashian breaks the legs or boobs rule as she picks North up from party" or "Selena Gomez breaks the leg or boobs rule and flashes both at Italian music festival." Is this news, or the reinforcing of misogyny and the inherent sexualization of women's bodies?

The modesty politics reiterated through so many so-called style rules are proof that women can never win. We start with strict school dress codes and end with rape culture, where "dress to get respect" seems like a reasonable alternative to "respect women." These issues might start small, but they can grow big. These issues might start young, but they seep into adulthood.

Because so many of us learn style rules like these as we're growing up, we easily accept them, eventually applying them onto adulthood and adult bodies. Rules like "fat people can't wear crop tops" are given a pass when we grow up with "can't" vernacular surrounding our clothing choices. Whether subliminally, subconsciously, or otherwise, we learn that rules surrounding style are a necessity, rather than a choice.

Sure, telling a 10-year-old that stripes and polka dots don't always match may not seem like a big deal, but what if that kid grows up applying more and more arbitrary rules to themselves? What of the kids who never learn the fun of fashion, because they were taught to "dress like adults" all along? It's unfair and it's unnecessary.

I don't believe that we need to train children to dress suitably for the workplace. We need to teach kids the fun of wearing three outrageous colors at once. We don't need to teach teenage girls their bodies are inherently sexual, simply for being exposed. In fact, we don't need any ridiculous style rules at all. After all, restriction never helped anybody express themselves.