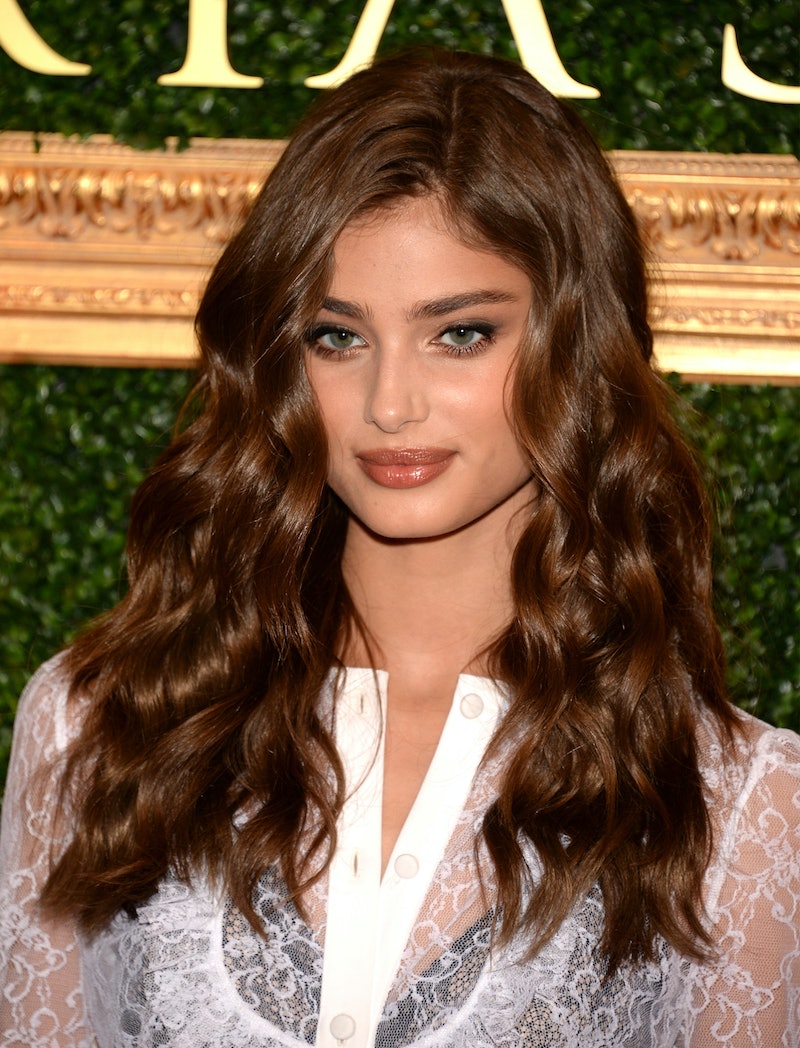 If you need proof that mermaid-length locks are out, and super short tresses are in, look no further than this latest Victoria's Secret model. Taylor Hill has debuted a pixie on social media recently, and the drastic new style makes her look like a totally different person. After all, what's a VS model without her signature luscious beach waves? Barely recognizable, that's what.

The 20-year-old took to Instagram to reveal her dramatic new 'do with two wow-worthy photos that definitely made some jaws drop. The model flaunted a shaggy dark brown pixie with asymmetrical pieces that graze past the top of her nose. One photo was captioned "Short hair don't care," while the other was captioned "Experimenting."

The style is quite the departure from her signature chocolate brown long locks, which makes me wonder whether she actually opted for a blunt chop, or if this is the work of a killer wig. Perhaps she is experimenting with her look for a shoot? Or just for fun? It wouldn't be the first time a model has fooled us with her hairstyle. Who could forget the time Gigi Hadid debuted a bob at the 2015 American American Music Awards, making heads turns, only to later reveal she was really just wearing a wig.

Hill, is that really you?!

Seriously, I had to do a double take.

Hill isn't the only celebrity who can pull off both a pixie and a long mane. Let's take a look at seven other starlets who have done it well in the past, too.

The actress looks fierce with both styles.

Woodley has had long flowing hair for so long that it was pretty shocking when she cut it all off.

It's no easy feat to pull off such varying hair lengths, but Hough does so flawlessly.

I must admit I was a bit bummed when Anne Hathaway chopped off her gorgeous long locks, but a pixie suits her well.

I am convinced there is no style this woman can't pull off.

The actress looks totally different with the two looks, doesn't she?

I don't think a pixie has looked better on anyone than it does on Emma Watson.