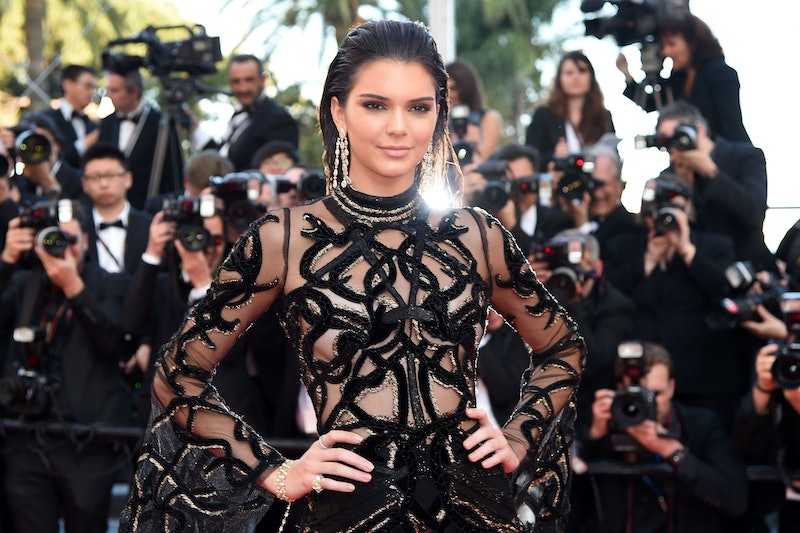 Odds are you've secretly stolen something from your best friend or sibling's closet at least once in your life. Well, you're not alone, because it turns out that even A-listers like to raid each other's wardrobes. Kendall Jenner has a great tip for borrowing clothing from her sisters' closets, according to her website, and she's actually pretty good at it. There's plenty of photographic evidence that she snags clothing from her siblings, and she's great at getting away with the act.

You'd think that when you're as wealthy as Jenner you'd just go out and buy the outfit that you're envying. Let's be honest, though, snagging it from a sibling's closet is half the fun of wearing it. And with four sisters, Jenner has likely gotten pretty good at the sneaky act. What's her secret? To have an organized plan of attack.

"Admission of guilt: I always used to steal clothes from Kylie when she was out of the house. I'd wait until she'd go downstairs, and then I'd strike!" Jenner wrote on her site. "I was the silent thief — very meticulous and neat, lol."

Jenner admits that her little sister was the perfect target because they were the same size, but says she only got away with it because she was so organized. "Ky was actually the worst at taking clothes from me. I ALWAYS knew," she noted. "The hangers would be messed up and she'd just leave messy evidence."

Although Jenner was great at getting away with her closet raids, she can't escape the public eye. If her little sis didn't know who stole her outfit, I'm guessing she'd eventually find out from the paparazzi. Here are some of the outfits she stole with no shame:

Way back in 2011, Jenner wore a simple black-and-white dress for the premiere of Easy A.

It looks like there was a case of sisterly swapping going on that year.

Look familiar? Granted it's not the same color, but both ladies pulled off this look.

Then there was that one time Jenner showed up in the same dress as Caitlyn Jenner. I guess great minds think alike!

Jenner showed up looking fabulous to a Balmain after-party in 2015.

Kim Kardashian wore the same exact dress during the same New York Fashion Week, but paired hers with a jacket.

Kendall and Kylie both wore the same dress last summer, so clearly the sartorial swapping is still going strong. Kendall wore the dress with tennis shoes, while her younger sis dressed it up with heels.

Jenner wore this black-and-white dress to the 2012 premiere of The Hunger Games, but her big sis wore it the year before.

The Jenners had the same style idea when they both wore this light sweater dress.

I guess great fashion runs in the family!