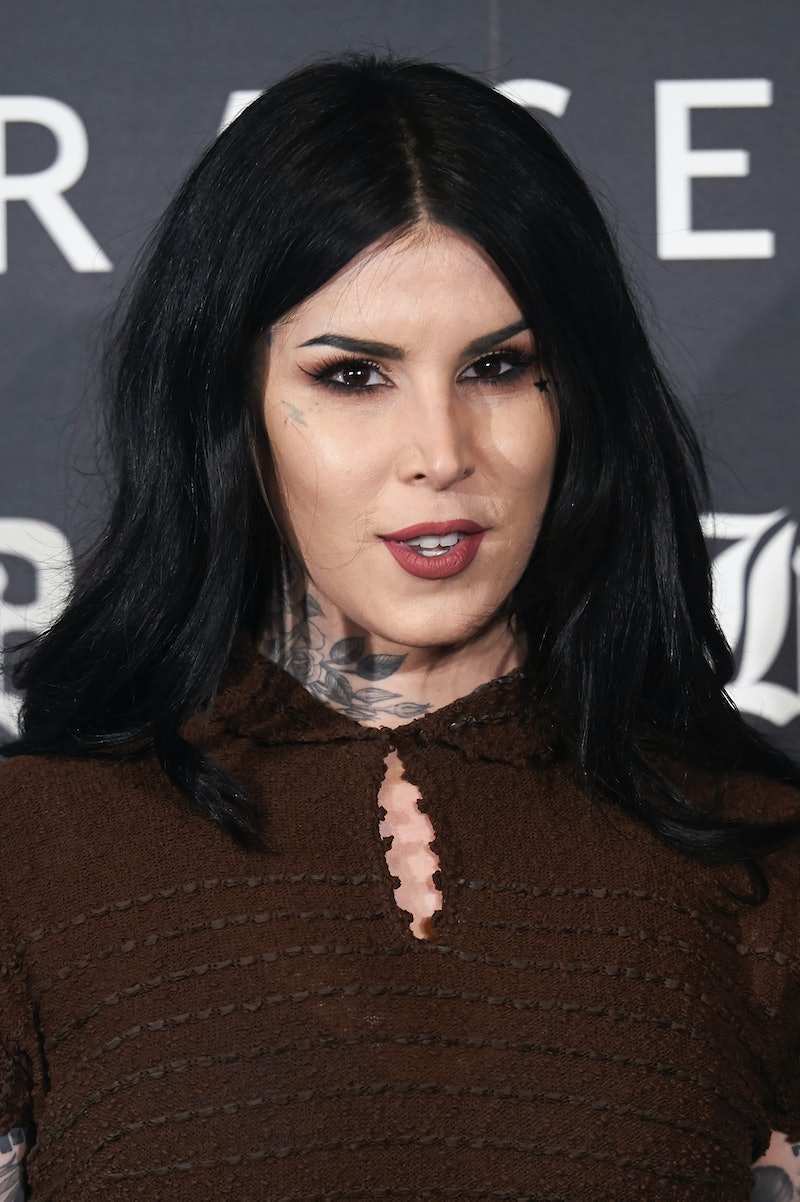 You might think that there's no place off limits to this star when it comes to tattoos, but it turns out you're completely wrong. There's one kind of tattoo Kat Von D isn't into, and it will likely surprise you. What is it, you ask? It happens to involve both her passion for ink and her passion for makeup.

Permanent ink is a signature for Kat Von D, not just as her profession, but as part of her look and the aesthetic of her beauty brand as well. She's got tattoos up her arms, down her legs, and even on her face, but there's one thing that she won't get tattooed — her makeup. According to an interview with Into The Gloss, the tattooist, who is also the brains behind a major beauty brand, is not 100 percent comfortable with the idea of making her eyebrows or liner permanent.

"I get a little concerned about tattooing makeup sometimes. I've been tattooing professionally since I was 16, and I'm 34 now. But for some people, it takes two weeks to get their cosmetic tattooing license, which does not sound right for the person who is putting a needle and permanent pigment close to your eye," Kat Von D told the publication. "It's a big risk. And makeup changes! It's ever-changing and seasonal, that's what's so cool and awesome about it."

It's kind of surprising that a woman who so passionately loves both tattoos and makeup wouldn't want to combine the two, but she does have a great point.

Kat Von D might not be a fan of tattooing makeup, but she is a fan of her Tattoo Liner, which she uses for way more than just a winged eye. The makeup maven told ITG that she even uses the product to fill in her brows. So that's her secret!

Below is a quick tutorial demonstrating how to get Kat Von D level brows using liquid liner.

While she might not have her makeup tattooed on, she has ink pretty much everywhere else. Here are some of the most interesting places that she has inked her body:

1. The Inside Of Her Palm

Getting tattoos on your hands isn't that unusual anymore, but it's not everyday that you see one on someone's palm.

Face tattoos are completely unconventional, but Kat Von D totally pulls it off.

Her knuckle tattoos don't spell anything out, but they are all symbols and initials that mean something to her, according to Starcasm.

I can't imagine this tattoo session was comfortable to sit through. It does look great on her though.

While Kat Von D's decolletage is free from tattoos, she does have some ink on her collarbone.

Her chest might be bare, but she has the word "Hollywood" tattooed on the lower part of her stomach.

There's nothing unconventional about having tattooed legs, but hers are almost completely covered.

She definitely rocks all that ink!