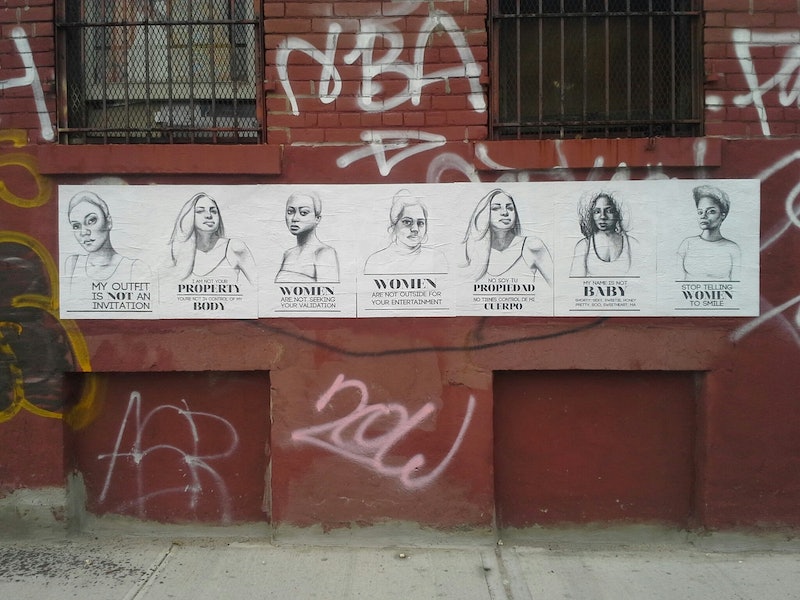 Scattered throughout New York City are a number of posters depicting hand-drawn images of a beautiful woman — and beneath the image, text that confronts would-be catcallers: “My outfit is not an invitation”; “Women are not outside for your entertainment”; “My name is not Baby, Shorty, Sexy, Sweetie, Honey, Pretty, Boo, Sweetheart, Ma”; “Stop telling me to smile.” They are bold, and beautiful — and they serve a purpose, one they accomplish with a great deal of power.

The work of Brooklyn-based artist Tatiyana Fazlalizadeh, the “Stop Telling Women to Smile” project speaks up for objectified women and victims of street harassment. The women are intentionally beautiful, while the captions are intentionally confrontational, with the idea being to humanize those who have been objectified. Speaking to the Telegraph, Fazlalizadeh says, “All this work is asking you to consider the fact that a lot of women, including myself, don’t like this behavior and don’t want to be treated this way — it makes us feel as if we are outside to entertain you and we are not here for that.”

What inspired the project wasn’t just one isolated incident; it was years of catcalling and street harassment that she found amplified when she moved first to Philadelphia, then to New York.” The project gets its name from the very first poster she create for it, a picture of herself with the phrase “Stop telling me to smile” emblazoned beneath it.

It’s (sadly) to be expected that there will be negative reactions to work like Fazlalizadeh’s; many posters have been torn down, while others have been defaced with words like “liar,” “slut,” and “whore.” But there has also been a huge outpouring of support for it. Thanks to a successful Kickstarter campaign, “Stop Telling Women to Smile” is making its way across the nation. Fazlalizadeh raised over $34,500, more than twice her target, in order to bring the project to cities across the country.

But lest it seem like the posters are simply shutting down the other side of the conversation, know that the intention is not to stop communication all together. Indeed, it’s sparking dialogue about street harassment in wonderfully atypical ways. For example, passersby have taken to writing their reactions on one poster in New York, explaining why they thought telling a women to smile was or wasn’t acceptable. Says Fazlalizadeh, “The point isn’t to stop interaction between men and women at all ... But it is promoting the idea that women have agency over their bodies and how they want to be treated and interacted with outdoors.” She continues, “So if I say I don’t want you to tell me to smile, that doesn’t mean I don’t want you to talk to me at all, it means I don’t want you to tell me what to do with my face.”