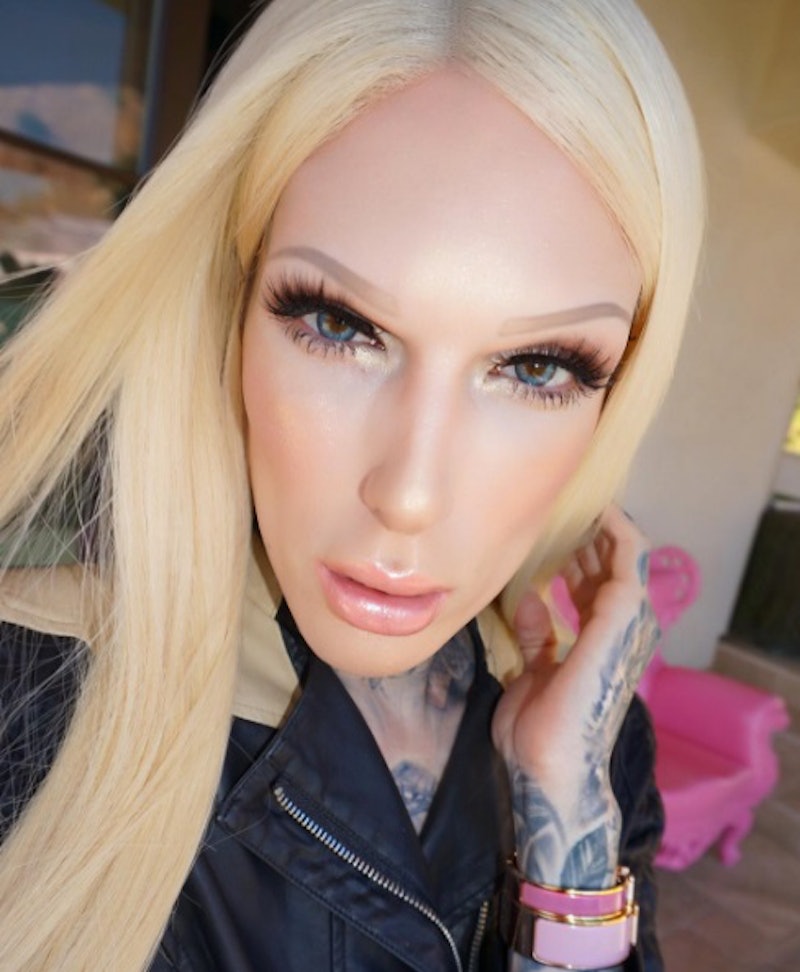 If I know anything about makeup brands that are adored with a cult-like fanaticism, I know that Jeffree Star Cosmetics is one of them. The makeup artist has rocked his fans' worlds yet again with the announcement of the newest Jeffree Star Cosmetics Androgyny Eyeshadow Palette. It's a bold move in naming, considering the MUA and internet sensation only dropped his first eyeshadow palette Beauty Killer earlier in May.

Star kept the recent announcement minimal, with only two tweets releasing little information about the new eyeshadow palette. Tweeting on May 28, Star revealed that the new product is called "Androgyny." We also know that it's a fall palette, with a release date pending. Just as with Beauty Killer, we have 10 shades to look forward to from the second eyeshadow palette in the Jeffree Star Cosmetics line. But among all the questions surrounding the announcement, one sticks out to me above all else: Why is Jeffree Star's new palette called "Androgyny?"

There are numerous potential answers; and at this point in time, any of them could be true. Whether it's a shoutout to his own fluid appearance, the usage of his products by all genders, or just a snappy title, what I want to know is why Jeffree Star is reusing the product name, considering he already has a liquid lipstick called Androgyny as well.

With his liquid lipsticks seemingly always being sold out and Androgyny being the color I see the most often amongst my favorite beauty bloggers, perhaps Star is trying to tell us something.

Hopefully the shade of the Jeffree Star Cosmetics liquid lipstick in Androgyny is going to be repeated as an eyeshadow hue in the same-named palette. Maybe Star is making the point that this palette is as destined to sell out as the rest of his products. More than likely, however, Star just really likes the term androgyny, the gender and sexual fluidity it can represent, and how it can be applied to the cosmetics industry.

By utilizing words like "androgyny" within the makeup world, the products he creates, and the cosmetics he wears, Star isn't just making the best products out there for women to use, but for anyone to use. Having made a career in part out of his own androgynous appearance, Star is ensuring that you and everyone else know it's not only OK, but bloody brilliant, to present androgynously if you so wish.

While I have my fingers crossed that the new palette features a deep, nude tone like the Androgyny liquid lipstick, I'd be perfectly happy if the reason the Androgyny title was reused turns out to be as simple as "he likes it."

More like this
Billie Eilish Teased The Debut Of Her New Fragrance
By Audrey Noble
12 Bellissima Beauty Moments From Milan Fashion Week S/S 2023
By Olivia Rose Ferreiro
The Reverse Cat Eye Is A Flawless Smoky Makeup Look For Fall
By Olivia Rose Ferreiro
15 Must-Have New Beauty Launches, According To Our Editors
By Rachel Lapidos
Get Even More From Bustle — Sign Up For The Newsletter