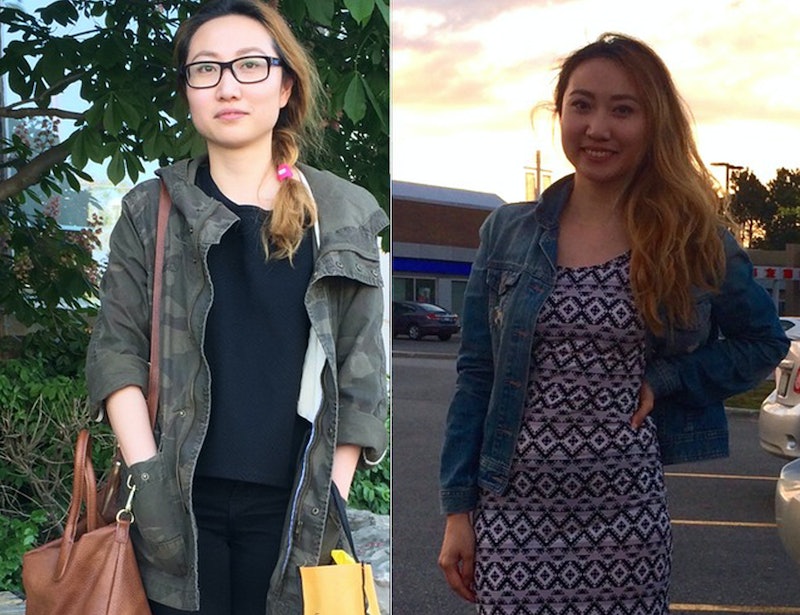 I've always loved '90s teen flicks, particularly She's All That. It could have been because of Freddie Prinze Jr., the dance break in the narrative (because what valid teen movie didn't have that?), or maybe the '90s nerd to cool girl makeover of Laney Boggs. Whatever the reason, her transformation from dweeb to running contender for prom queen appealed to me to no end.

That pivotal makeover moment was one that '90s teen movie dreams were made of. While it was a typical and, in retrospect, horribly sexist and body shaming trope, I couldn't help but ask myself whether this type of makeover might create a different effect if undergone in 2016.

And so, I decided to have myself a little makeover à la Laney Boggs. Was there anything wrong with Laney pre-makeover? Personally, I'd say no. But although her outer appearance was what changed most throughout the story, she did become a bit more open-minded and less judgmental about everyone around her along the way.

Taking all of this into consideration, I wondered whether my own transformation would have a similar effect on both how I perceived myself, and how I perceived others. And, of course, would people think differently of me? It was something I had to find out. These are the results of going from a nerd to a cool girl in just one week.

For Day 1, I needed to make sure that my transformation from nerd to cool girl would be very obvious. So I started this experiment off with a stereotypically geeky look: glasses, my hair in a braid, and clothes in all-black.

I usually don't wear glasses to work, especially on sunny days. Honestly, I'd rather wear my sunglasses. The few comments I received were simply from people who didn't know I wore glasses at all, which is a typical response when I do since I rock contacts 90 percent of the time.

Another colleague told me that the whole outfit gave off a nerdy chic look. I took it as a compliment, and felt that this experiment was off to an interesting start.

Day 2 brought along the after-effects of going through a makeover. I had intentionally let my eyebrows grow beforehand so I could pluck them, just like Laney did. I also took the time to put on eyeshadow and be a little more glammed-up than usual. Ultimately, I went with a neutral eyeshadow look that was reminiscent of many of the characters from She's All That.

In terms of outfits, I wanted my looks for the remainder of the week to be inspired by those '90s cool girls, which meant I'd be wearing skirts or dresses from here on out. This was also inspired by the fact that Laney's first makeover outfit was a red party dress.

Going into work with more makeup on than usual and my hair done up, I honestly expected at least some reactions. But there actually weren't any noticeable ones whatsoever.

What annoyed me the most about this day was not the lack of reactions, but the fact that I had to take extra time out of my morning to do my makeup when I would have rather been sleeping in a little longer. The rest of the week was looking like it was going to be long and frustrating.

I wanted to switch things up for Day 3 and actually see if sporting straight hair would garner any reactions — being that a sleek mane was quintessential to '90s teen cinema. My hair is naturally wavy and I wear it as such day in, day out. I straightened my hair the night before, which was a smart move on my part because that meant not waking up too early the day of. I also discovered that straightening my hair a day after washing it was a lot easier than doing so on the same evening.

One co-worker asked whether there was something different about me, and proceeded to realize that it was my hair.

Another colleague told me that they liked my outfit, which was only interesting because this person has never commented on anything I have worn before.

Just for fun, I Snapchatted a pic of my straight hair to a few girlfriends. A lot of their reactions were positive and supportive of this straighter look.

By Day 4, I was getting into the rhythm of putting on eyeshadow and a bit more makeup than usual. I also sported a patterned skirt, black shirt, and jean jacket. I was actually into the groove of being a bit more made up — to the point where I was even enjoying appearing this way.

I got complimented by a co-worker who said that my hair looked nice straight. He also noted that I should wear it straight more often. I know that he meant it as a compliment, but it also made me question whether my natural hair doesn't agree with folks as much.

Another co-worker of mine complimented the skirt, which was lovely because it was a long piece and didn't show off any leg. This was a bit of a surprise, TBH.

With Day 5 in full swing, I was past the halfway point of this experiment. With my face made up and my hair wavy and extra voluminous, I sported one of my favorite summer dresses, a black cardigan, jean jacket, and my new beloved flats with lace-up details.

The most surprising compliment that I received for this day was actually regarding my flats. I got a few remarks about how killer my shoes were throughout. Some even came from co-workers who I've never interacted with before.

I also work with a couple of friends I've known since high school, who proceeded to tease me about the slit in my dress, saying that I was showing off a lot of leg. I wasn't, but I don't see why it would have mattered anyway.

This is the longest I've consecutively gone wearing dresses or skirts in my life. Day 6 was a time for errands, so I tried my best to keep the tone of the makeover by sporting a comfy dress, jean jacket, and, of course, Birkenstocks.

While I was in the groove of wearing a more made-up look every day, I wanted to let my skin breathe a little. I sported concealer, applied liquid lipstick, and filled in my brows a bit more than usual. Day 6, however, came and went without any commentary.

As Day 7 rolled around, it was time to end the experiment. Again, I just wanted to my skin to take a bit of a breather, so I didn't apply heavy makeup and kept everything light. I stuck to a dress again, to end the week off on a cool-girl-from-the-'90s note.

As I spent the last day of this cool girl makeover experiment running errands, I didn't receive any comments. Nonetheless, I realized that this whole process would have quite the lasting impression on me, and that I had learned a thing or two.

And What Did The Makeover Teach Me?

First off, I never realized how strange those '90s nerd to cool girl makeovers were. The only thing that ever changed for those characters was how they looked on the outside. Eventually, their male interest began to realize that the nerdy girl was rad all along, but it took a friggin' makeover to get there.

With that in mind, I really had to think about all the compliments I was receiving. Normally, I keep my makeup and hair pretty low-key. It took me a long time to accept that I have wavy locks, so sporting them naturally in my day-to-day is like a proclamation of loving myself.

In terms of makeup, I used to wear heavy eyeshadow all the time when I was younger, but eventually I realized that I needed to let my skin breathe a bit more. After this experiment, however, I began to really enjoy taking the time to apply more cosmetics and styling my hair into something a little more unique once in a while.

By the mid-point of this experiment, I felt that I wanted to keep up the routine for myself, rather than as an act of obligation. Putting on a bit more eyeshadow than usual helped me feel like I was taking just a bit more care of myself. As long as you enjoy it, putting some time aside to glam up isn't a bad thing.

While it's wonderful to feel beautiful without wearing too much makeup, it's still totally acceptable to take the time to treat yourself. You might receive more compliments when you look traditionally "feminine" or "abiding by conventional beauty standards," yes; however, ultimately, the key is to wear the clothes (and the makeup) that allow you to feel like you're giving yourself some much needed one-on-one time.