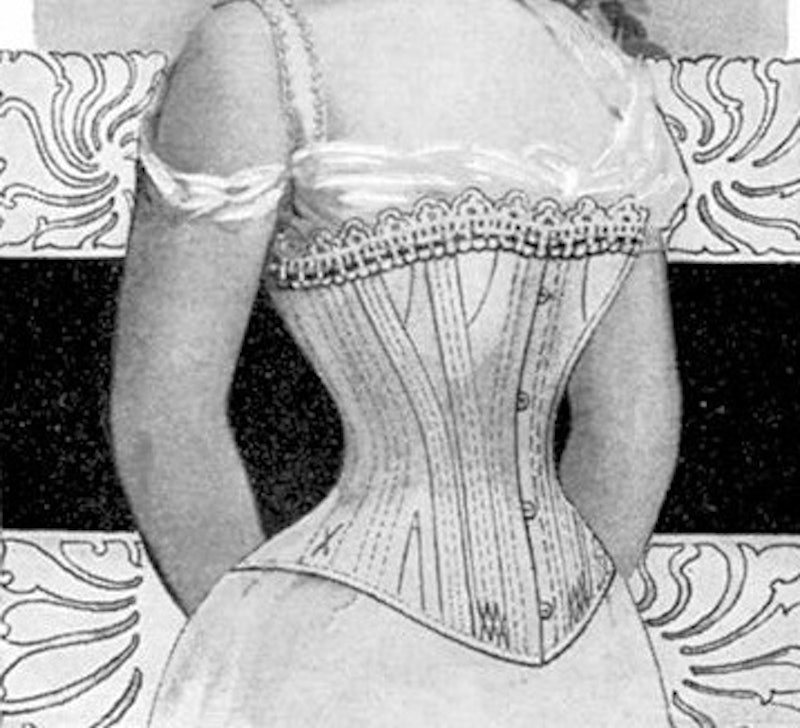 Girdles, corsets, and push up bras aren't words that are new to us. Women have been trying to alter their shape to what's most popular for centuries now, but some support-wear is worse than others. While a padded bra could be annoying, there are some horrific bras in history that deserve a spotlight so we could learn from past mistakes. While nowadays many women alter their shape with the help of Spanx, wonder bras, waist trainers, and even padded panties, one could argue that hundreds of years ago women were more intense with their alterations. Whether pressures to conform were more vigorous back then, or not as much information was available as to what those kind of constrictions can do to your health, it appeared that women would suffer in some surprising underwear in order to look correct in their dresses.

If you thought your Spanx were torture devices, just imagine what it must feel like to wear an iron corset, or one ribbed with sturdy whale bones. Or if you ever thought that how crazy it was that unrealistic beauty standards were pushed on you as a pre-teen, just think of how weird it is to advertise corsets to babies. Let's take a peek at some of the most horrific bras in history and gasp at them together.

While nowadays we might view the corset as a sexy addition to any outfit or lingerie getup (hello, Lady Marmalade,) but back in the 1500s these were painful contraptions. According to Good Housekeeping, women would wear them in order to "flatten women's breasts, pushing them upward — almost to the point where they were falling out of their dresses." And if you don't think the gravity-defying tactics were too terrible, just listen to what those sturdy corsets were made out of. Good Housekeeping continued, "Most were made with a long piece of wood (busk) or whalebone sewn into the casing." Comfy.

In the Edwardian era, the prized figure shape was no longer an hourglass, but an "S" shape. Enter the girdle. According to Good Housekeeping, "The weaving and busk moved from the back to the front, forcing the torso forward and the hips to jut outward, making a woman's figure more of an "S" shape." Ouch.

Before you gasp at the horror of this invention, there's been debate whether this corset was used for fashion or for back problems. The reason some historians argued that it could have been donned by ladies in waiting was because of a particularly fashion-obsessed queen of France.

Fashion historian Valerie Steele explained, "the origin myth emphasizes the role of an individual woman, a queen, who is associated with a cruel, tortuous fashion. Thus, the author of the fetishistic book The Corset and the Crinoline (1868) claimed that metal corsets were customarily worn 'in the time of Catherine de Medici,' when 'extraordinary tenuity was insisted on, thirteen inches waist measure being the standard of fashionable elegance.'" Talk about unrealistic beauty standards.

You can never start teaching girls too early on what society expects from them. So go ahead and buy little Jane a corset while you're shopping for your own. She'll be ahead of the curve! Pun intended. And the best part of this ad? The bit of copy that says, "Fits baby, too!"

In the 1920's, the stylish figure was that of a young boy's: Willowy, flat chested, and stick-straight. So for the ladies that had big busts, they needed some help in flattening things out. Enter the rubber bra, where the thick material would help the woman perspire and lose her boob-weight.

Flapper dresses wouldn't look the same with a big baby bump, but there was a work-around for those in the family way. Rather than sacrificing fashion, you could just strap on a corset to keep that svelte figure. As the ad promised, it will keep your "normal appearance preserved." Talk about cramped quarters for the babe.

While centuries might have passed, the hourglass figure that corsets give is still very much in vogue. So it's no surprise that celebrities like the Kardashians are promoting waist trainer girdles, in order to help women achieve that shape. But the thing is, there are a lot of health side effects that come with strapping on one of those. WhoWhatWear explained just a few, stating "Because many versions compress the lungs, it’s not uncommon to experience shortness of breath while wearing a waist trainer." They also reported, "Wearing a waist trainer squeezes your internal organs, which can 'push acid from the stomach into the esophagus.' Those who already have reflux disease, irritable bowel syndrome or urinary incontinence are especially prone." A small waist has the potential to cause you many problems.

Whether women wanted flatter chests or bigger busts, hourglass figures or stick-straight silhouettes, one thing has stayed the same through the ages: Women use bras to help contour their shapes to what's most popular. Here's to working on liking our shapes just as they are, bra or no bra.