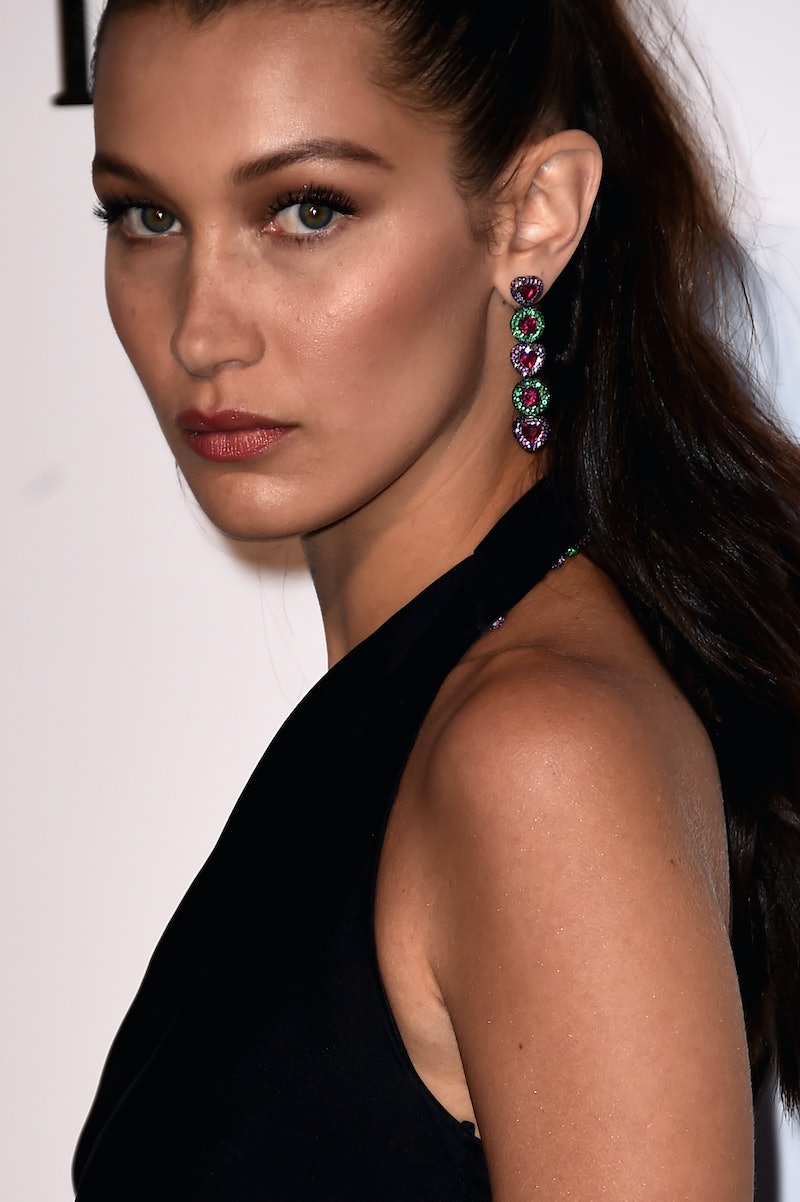 Step aside on that runway, Gigi Hadid! The supermodel's little sister Bella Hadid was just named the face of Dior. She is now a brand ambassador and the announcement comes during what can only be termed "Bella Hadid's year." First off, a huge congrats to Hadid for nabbing this new gig, which will put her beautiful face in front of even more eyes as part of the advertising and promotion for Dior makeup. According to Women's Wear Daily, Hadid is set to appear in online videos as part of her new gig. The first ep lands on June 6 and will feature the model discussing her favorite Dior products. Hadid also walked the runway for one of the brand's shows in England on Tuesday, May 31.

While it's both easy and tempting, and maybe even a little lazy, to continue to view Bella Hadid as "Gigi's little sister," her career has skyrocketed to the stratosphere in 2016 and she is now on par with her sibling. In addition to adding this primo beauty gig to her resume, Hadid has been racking up major magazine covers, as well.

Hadid also announced her thrilling new gig via her Instagram feed. Check out the shot, featuring her hair slicked off her face and that smoldering stare, below. Her eyes will turn you into kindling.

The model got cheeky on the cover of American ELLE for the June 2016 issue, posing from the side and adopting a very French girl chic look. Those va-va-voom red lips, though! Bella-for-ELLE was, in a word, fab. Make that BELLE-A.

Hadid also scooped up her very first Vogue cover, gracing the May issue of the Turkiye edition, baring her tummy and looking stunning in white. Ready for another?

She also scored the cover of the Korean edition of W. She so reminds me of Liv Tyler. Wait, there's more.

Hadid grabbed the May 2016 cover of the German issue of Glamour, which she guest-edited.

All of Hadid's covers have been so versatile and she has slayed many different looks.

B. Hadid has been everywhere this spring and she has topped off a banner half-year by becoming one of the faces of Dior, joining Rihanna, Jennifer Lawrence, and Charlize Theron as fellow brand ambassadors.

The first six months of 2016 have been damn good to Hadid. Imagine what the next six months will bring? Bella Hadid isn't nipping at her sister's Louboutins. She stands toe-to-toe and it works, since they both have opposite aesthetics. There is room at top for both of the Sisters Hadid.

More like this
Early 2000s-Era Rhinestone Tattoos Are Back, Baby
By Jordan Murray
The 10 Best Emmys 2022 Makeup Looks
By Paris Giles
Camila Cabello Slayed The Face Gem Trend At Rock In Rio 2022
By Olivia Rose Ferreiro
14 Times Celebrities Rocked ’90s-Era Beauty At The Emmys
By Paris Giles
Get Even More From Bustle — Sign Up For The Newsletter