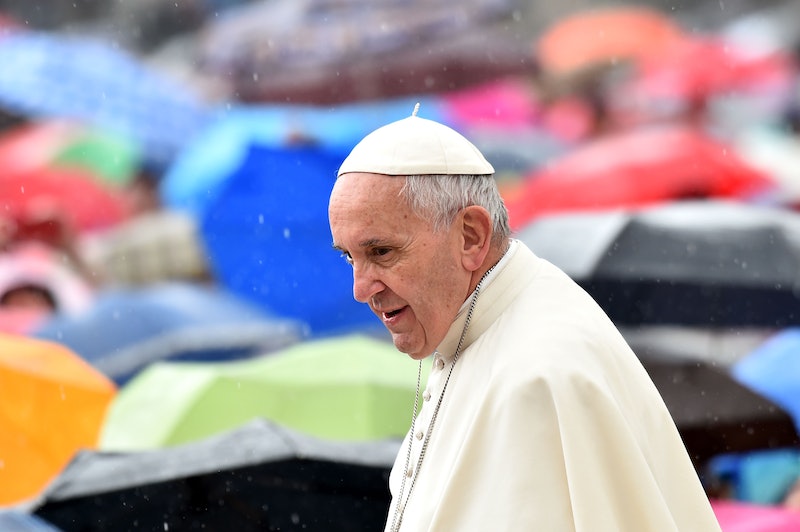 If you suspect you have nothing in common with the Pope, it's time to think again. Besides sneaking out of his house late at night and being completely caught up with all types of social media, Pope Francis is a fan of beauty vloggers as well. That's right, the leader of the worldwide Catholic Church approves of makeup tutorial and product reviews, and his reasoning is actually pretty great.

According to The Guardian, before his recent educational conference at the Vatican, Pope Francis sat down with a tableful of 12 YouTube personalities from six different continents. The group included Louise Pentland, the British beauty blogger behind Sprinkle of Glitter, and Hayla Ghazal, a Dubai-based comedian. According to The Guardian, the Pope talked everything from football games to YouTube videos and shared why he's a big fan of beauty vloggers. “I am glad that you carry out the type of work you said, following the line of beauty, it’s a great thing," the Pope said, according to The Guardian. "To preach beauty and show beauty helps neutralize aggression."

Now I'm not saying that Pope Francis secretly sits in his bed at night and watches Jaclyn Hill videos with a bottle of wine in his hand like you do, but he does have some pretty strong feelings about the profession. “You can create a virtual identity; you belong to this circle at least virtually," said the Pope. "From that you can start taking a path of optimism and hope.”

Honestly, he couldn't have said it better. While the Pope was speaking about all sorts of YouTube personalities, there are tons of fashion and beauty vloggers out there who have done way more for their followers than just tell them which products to buy. Here are a few YouTubers who prove Pope Francis' point perfectly.

Hill recorded a late night chat of a topic that was super personal to her — bullying. She constantly preaches that beauty is something from within, but in this specific video she proves that in order to make a change, we need to band together.

Earlier this year, Kathleen Fuentes opened up about her anxiety. She asked for advice from her followers as well as comforted those who might also be dealing with anxiety as well.

While she normally sticks to beauty tutorials and makeup hauls, she got personal with her followers with her coming out video. She later said that it was the most influential video so far — the 15 million views proves it.

You might remember this viral video from last summer. In it, Ford posts actual hurtful comments that she gotten on her images, proving that words can be hurtful. She urges subscribers to not judge their own beauty on what people say.

This beauty vlogger opened up about her depression and anxiety to her subscribers, telling them that they were a huge part of her recovery.

In a video called "My Beautiful Struggle," Bone opens up about her disability. She talks about how she got past it and made her stronger.

During Deaf Awareness month, this beauty vlogger opened up about her disability and got real about some of the myths out there.

Bottom line: Inspiration comes from even the most unexpected places.