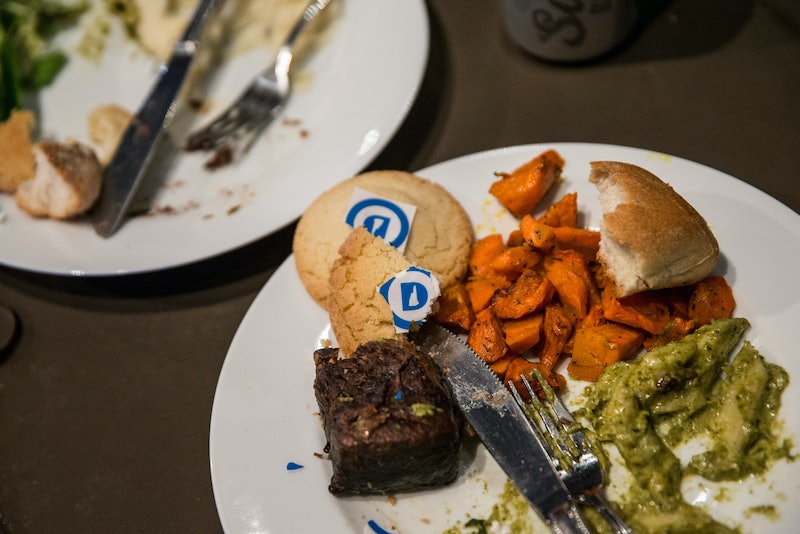 There's a photo in my phone that I’ll scroll to when I want to show someone what I looked like when I was at peak anorexia. I’m standing in a blue and white dress whose zipper I ripped when I was trying to get into it a few months ago. In the picture, my hands are on my waist, and I don’t look particularly pretty. But I do look particularly thin.

I'm not sure why I pull this image out as often as I do. I shouldn’t even still have this photo on my phone. I shouldn’t have it in my life at all, but I do, and I've made a conscious decision to keep it there.

I tend to show it when I talk to friends — my boyfriend saw it fairly soon after we started dating — and my coworkers have all looked at it, too. Maybe I pull it up partly to prove that I’ve been through something difficult. Or to say, Look. I’m past this, and I can treat it flippantly. But I also display it because I’m still proud of how I look in it.

The reactions to the picture are all the same: consistent horror. "Holy shit," people say. "You look so much better now. You look so sick there." And at less than a hundred pounds, I suppose I do. I suppose I was.

I am in recovery, yes. But looking at that picture of me in the blue dress, I still want that body back. Standing next to my boyfriend, I still worry not that he thinks I am fat, but that people who walk past us will think, She is not thin enough to be with him.

After I hit my lowest weight, I collapsed in the basement of a Brooklyn Barnes & Noble across the street from my apartment, which, luckily, also happened to be across the street from a hospital. I was dehydrated, undernourished, and at the time, spending three hours exercising every day. That's what it took to finally get help.

It's National Eating Disorder Awareness Week, which means that it's time to be especially aware of my recovery. Because, yes, I've recovered. Whatever that means.

After you live through anorexia, you attempt to reclaim certain parts of yourself: you learn to eat again; you learn to function out in the world again socially; you learn to stop hiding so much of who you are. And, in some ways, I have. I no longer fit into my 00 jeans, which telegraphs to the outside world that I'm back on my feet.

Here's where the rest of that perfect recovery essay goes, right? Here's where you find out that I rediscovered how much I love ice cream and my hourglass figure.

My relationship with food is forever damaged. I'll never be able to savor something without worrying about the "damage" it's doing to my figure. I’m still an incredibly picky eater. I don’t do dessert, and my no dairy, no egg, pescetarian diet is as rooted in the desire to avoid fattening foods as it is in ethical concerns. And anyone in my life knows better than to ask if I’d like the bread basket.

There's an expectation that weighs on me as someone in recovery, a sentiment that's pedaled during a week like this in which we glorify recovery. I feel the pressure to have risen above my eating disorder. I'm supposed to feel resentful of that period in my life, scornful of the time I lost stuck in a prison of calorie-counting, furious that I made myself a slave to something that ultimately stole my happiness and functionality.

But the truth is I’ve never been resentful of my eating disorder. In a sick way, I look back at my ability to forgo meals with fondness, at my motivation to spend so much time in the gym wistfully. I'm everything that is toxic to the happy storyline of National Eating Disorder Awareness Week. I'm too aware.

I am in recovery, yes. But looking at that picture of me in the blue dress, I still want that body back. Standing next to my boyfriend, I still worry not that he thinks I am fat, but that people who walk past us will think, She is not thin enough to be with him. I’m not supposed to feel any of these things, and I know it. I’m supposed to feel grateful I’m alive; I’m supposed to feel a feminist indignation at my own willingness to shrink, to conform.

Instead, I feel guilty that I don’t have the relationship with my eating disorder that I somehow should: My mind is still not free. I live in a constant state of fear that it never will be.

What I do hate is the way I’ve fucked up my digestive system irreparably, and that food will never, ever just be food for me. I hate that one day three years ago, I decided to spit out a bite of an apple, and it felt good, and everything went downhill from there.

Of course, my recovery efforts aren't entirely empty. I’m slowly teaching myself that a chocolate-covered espresso bean isn't the beginning of a slide into obesity. I practice stepping into the gym for just 20 minutes at a time to change the association from weight-loss to fitness. I’m trying to let myself be a healthy person, instead of an obsessor.

Maybe there's a future ahead for me where recovery looks as shiny as it does in the literature. Maybe there will come a time when I'll be able to press delete on the photo that antagonizes me and sets so much of this destructive train of thought in motion. Or at least I won't be such a pain in the ass to take out to dinner.

In the midst of the perfect PSAs, here's the one I'd offer: "Recovery" isn't always with a capital 'R,' and it doesn't always feel like a black and white victory. Don't be afraid to let it happen as it will — fitting into someone else's box of what your reconstruction of self should like will only make things worse. Living up to pressure is what got you here in the first place, anyway.

More like this
The 19 Best Tweets & Memes About Bisexual Awareness Week
By Lexi Inks
This Psychological Effect Might Be Keeping You From Hitting Your Goals
By Lexi Inks
Help! I'm Not Getting Any Attention On Dating Apps. What Can I Do?
By Sophia Benoit
The 12 Best Strapless Bras That Won’t Slip & Fall Down
By Audrey Williams and BDG Commerce
Get Even More From Bustle — Sign Up For The Newsletter