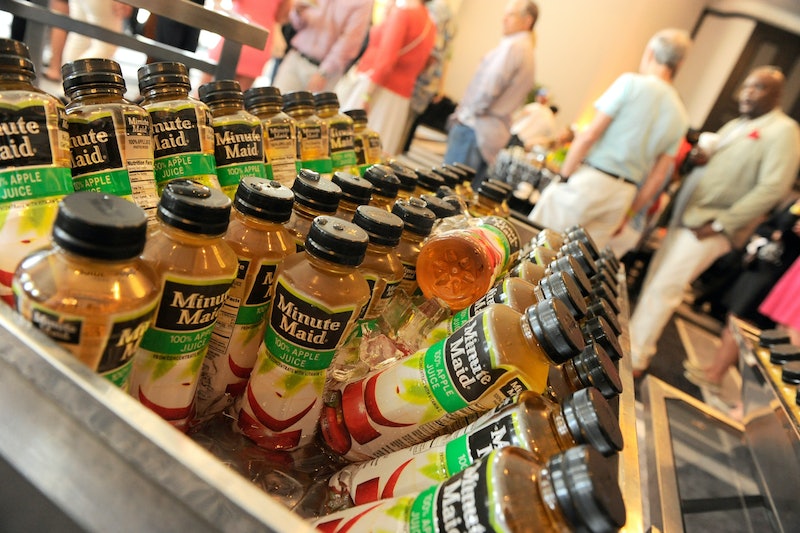 Job, relationship, networking, volunteering, friends, your yoga habit, your happy hour habit: clocking in the recommended eight hours of sleep often doesn't make our list of priorities. But if you're diligent about snooze time — you shut off your beloved smartphone before bed, exercise, have a regular sleep schedule — and still can't seem to doze off or are waking up in the middle of the night, your diet may be to blame. Find out which foods to skip so you can fall asleep faster than Justin Bieber in a Brazilian hotel room.

Eating an apple before bed won't mean staring at the ceiling for hours after, but certain high-sugar fruit such as watermelon and bananas may trigger an upset stomach. You'll also want to steer clear of fruit juices which tend to be loaded with the sweet stuff. (Confession: this writer has occasional nocturnal Capri Sun cravings.) "High intakes of fructose can lead to gastric distress with bloating, gas, pain and diarrhea," says Susan Kleiner, Ph.D., author of Power Eating and owner of Seattle-based High Performance Nutrition, LLC. "Fructose diffuses slowly across the intestinal membrane, so if too much is consumed at once, some of it remains in the gut, and bacteria begin to digest it."

Wait, hasn't tea been used as a sleep aid for centuries? True, but it depends on what kind. You're safe with herbal teas such as peppermint, ginger, and chamomile, which research has shown contains flavonoids that encourage sleep. Watch out for black teas (English breakfast, Earl Grey, Chai) and some green teas, both of which contain enough caffeine to disrupt dozing off.

You already know that fatty foods aren't waistline or heart friendly, but high-fat meals can also deter sleep. "Meats, cheese, fried and fast foods lend themselves to a very slow digestion process that leads to an uncomfortable feeling of fullness. More disrupting is gastric reflux and heartburn which commonly occur after a high fat meal," says Kleiner.

H20 is great for hydration and health, but only so-so for sleep. While guzzling water won't harm your health, you might be prone to more nighttime bathroom breaks, which can make it hard to get back to sleep — super annoying. To ensure a night spent solely horizontal, avoid drinking 60 to 90 minutes before bed.

Not saying you can't #treatyoself with a healthy dessert after dinner, but you may want to cut off the sweets two to three hours before bed. "Sweet foods like candies, cookies, and cakes can disrupt sleep, usually by making it difficult to fall asleep," says Kleiner. "These foods trick the body so it 'thinks' it's supposed to become active rather than slow down. Blood sugar levels rise, stimulating body systems for activity rather than rest."

A night of boozing may prompt you to hit the sheets faster, but your sleep quality will suffer. Not only does drinking increase the number of times you wake up at night (even if you aren't aware of it), alcohol reduces REM sleep , a critical stage during which memories are stored and learning occurs. Cap off your nightcap two hours before you hit the sack to log in the most restful sleep.