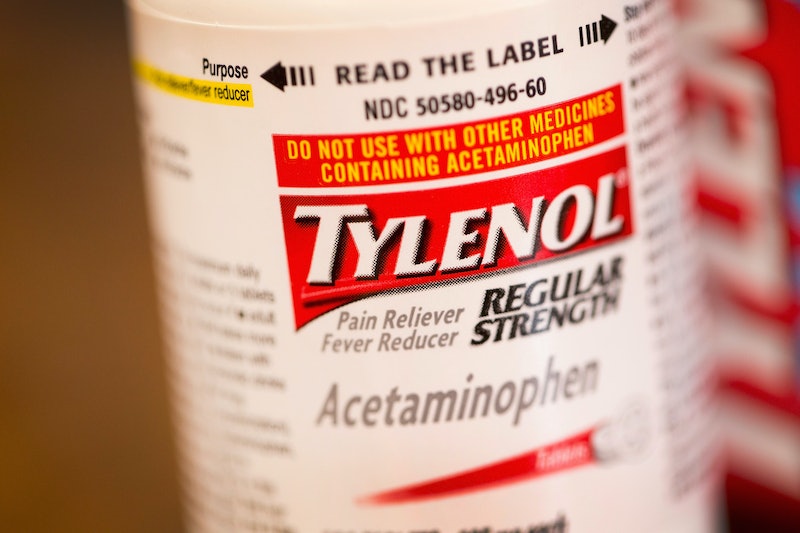 If Tylenol or other medications containing acetaminophen are your pain relievers of choice, there's something you should know: new evidence indicates that taking Tylenol during pregnancy could be linked to ADHD.

64,000 families in the Danish National Birth Cohort took part in the study, Forbes reports. The mothers filled out questionnaires that asked questions both about the frequency of their acetaminophen use during pregnancy and about their children’s behavior; also considered were official diagnoses of a severe type of ADHD known as hyperkinetic disorder (HKD) and the number of prescriptions for ADHD medications like Ritalin.

Of course, if there’s one thing I took away from high school science, it’s that correlation is not causation. The authors of the study acknowledge this fact: Behavior problems can be caused by a wide variety of genetic and environmental factors; additionally, there may be other factors at play that haven’t yet been discovered. If, however, you believe in the old mantra, “better safe than sorry,” it might be best to avoid taking acetaminophen if you’re expecting. It can’t hurt, right?

More like this
It's A Pleasure #53: Help! My Boyfriend Won't Tell Me Why He Stopped Going Down On Me
By Sophia Benoit
10 Ways To Be More Empathetic To Your Partner
By Raven Ishak and Lexi Inks
Think Your Partner Is Cheating? These Tarot Cards May Confirm Your Suspicions
By Kristine Fellizar
The 'Love Island' Wedding Mystery That No One Saw Coming
By Darshita Goyal
Get Even More From Bustle — Sign Up For The Newsletter