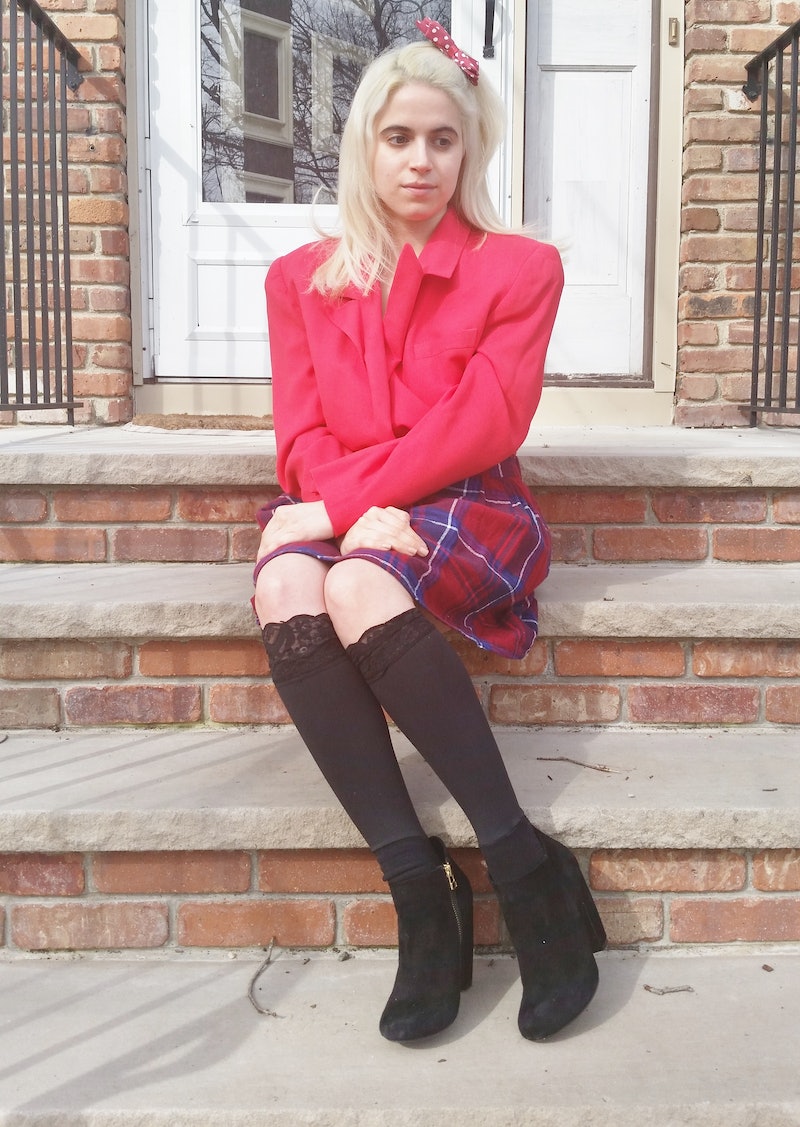 When it comes fictional high school alphas, the Heathers clan from the 1988 dark comedy Heathers definitely set the standards for mean and vicious cool girls. OK, so maybe the Flawless Four from Jawbreaker deserve to share the title of Cruelest Teens, but Westerburg High School’s resident witches really did the whole mean girl posse first, and best in my opinion.

Reflecting on my own time spent in high school hell, it’s safe to say I wouldn’t be any of the Heathers for sure. Not only were my high school years spent as an anxious social outcast hiding in the bathroom during lunch, but I was more of a victim of some cool-girl antics, desperately waiting for the whole thing to end. Yep, I probably was your high school's Martha Dunnstock. Sigh.

So, when my editor asked me if I would be interested dressing like the members of the teen-queen clique for a week, I jumped at the chance. Sadly I wouldn’t have Jason Dean (ILU, Christian Slater) by my side to share slushies with, but it would be more than fun to dabble in ‘some '80s fashion, and maybe try a lunchtime poll or two in the meantime.

So grabbing some scrunchies and all the padded blazers I could find, here’s what happened when I wore Heathers -inspired looks, for seven days straight. BTW, this post contains spoilers — but you've totally seen the movie, right?

I’ve always been a little late to the Heathers party. I actually first saw the film on Netflix last September. But that doesn’t mean I can’t be converted into a superfan overnight; I find myself quoting the film whenever I get a chance.

To take my fandom to the next level, I definitely thought it would be fun to start dressing like the catty girls every loves to hate. Starting off with HBIC Heather Chandler, I definitely wanted to get that bitchy teen queen vibe just right.

Heather Chandler definitely was the manipulative tyrant of the group, and to capture her style correctly, I focused on late ‘80s staples such block colors, bold blazers and preppy skirts.

Surprisingly, putting my outfit together wasn’t too hard. Luckily, my mom (who happens to be named Heather) still had some ‘80s clothes hiding in the back of her closet, and this vintage bright red Christian Dior blazer was just perfect. Yes, the shoulder pads were a bit much, but to bring Heather’s style into my own life, I’d have to suck it up for the time being.

Taking a cue from Heather’s look as seen in the Heathers musical (yes, it’s a thing) I paired my padded blazer with a preppy plaid skirt, knee high socks and some black velvet booties. This gave my outfit that '80s spoiled brat look I was definitely going for.

Now I know the Heathers gang goes hard on the scrunchies, but I haven’t owned a scrunchie in years, so I improvised and grabbed an old bow I’ve had since I was small. This gave my look that dated teen-girl edge the movie made look oh-so-good.

Wearing this out in public proved to an interesting challenge, as the reactions almost proved to be nonexistent. Of course I got some glances here and there (my barista had to do a double take!) but oddly enough, no one seemed to care when I was out and about running errands. I honestly think the bow got most of the attention.

Taking inspiration from Heather Chandler yet again, on Day 2 I recreated the look from the scene where the leading queen bee meets her deserving end. Now of course I won’t be drinking drain cleaner to cure any hangover, but with a lazy day off on my hands, I definitely wanted to hang around in a pink robe Heather wears in the film.

This Heather-inspired outfit is probably the easiest: All you need is a pink bathrobe and a red scrunchie (or bow, which is what I used yet again).

Since I was hanging at home, I really didn’t get too much reactions on this one. But to compensate for my rather simple outfit, I mixed up some blue water (thanks food coloring) grabbed some munchies (where are you corn nuts?) and called it a day with Netflix.

She may be a soulless piranha, but I'll be happy to argue that Heather Chandler is probably the best-dressed character of the film. So, taking yet another page from her teen-queen playbook, I decided to recreate the Remington college party look full of shoulder pads and tacky pearls.

I have to say, I am not a fan of '80s fashion at all. Looking back at my mom's fashion choices back then makes me wince in pain. But, for journalism, I grabbed my best red body con dress, and created an easy shoulder pad effect, by stuffing some tissue paper under the shoulders. Wearing, this outfit out to lunch with my sister proved to have no effect on people either. I got practically no reactions from strangers at all.

Probably the most tolerable of the Heathers clan comes Heather McNamara, the yellow-clad cheerleader you kind of feel sorry for. Yes, she was a still bully who arguably earned her fair share of karma, but her and struggles vulnerabilities made her a heck of a lot more human than the other girls in the group. She probably was the only Heather who actually had feelings.

Unlike Heather Chandler and Heather Duke, this Heather had a penchant for the color yellow; her closet full of yellow blazers and yellow plaid could have given Cher Horowitz a run for her money. Unfortunately I didn't have enough yellow in my wardrobe to really own this look from head to toe, so I had to make do with a yellow top, and green plaid skirt.

I was told by others that this outfit was a little more Grace Kelly than '80s teen queen, and I totally agreed. So far, it's been somewhat challenging to find the right Heathers outfits, as I've hit three Goodwill stores, and still couldn't find the right pieces. I'm telling you, '80s fashion really is the worst.

While I struggle with her choice to even associate with the Heathers in the first place, I'll still say that Veronica hands-down is the best character in Heathers. I mean, c'mon! Wynona Ryder is queen!

It's true that Veronica indeed does wear blazers and plaid like the rest of the clique, but she also tends to gravitate towards blue, grey and black pieces too. Inspired by Veronica's funeral attire in particular, I paired a navy '80s vintage Lord & Taylor blazer (which was also my mom's) with a black lace dress, combat boots and black floppy hat.

Now would I wear something like to real life funeral? Definitely not.

Ugh! The only fictional teen witch I hate more than Courtney Shayne, then it's got to be Heather Duke. Of course Heather Chandler was horrendous dictator of the film, but Heather Duke proved to be just as bad — or even worse. Not only did this initially timid Heather become the film's new cruel queen bee, but she even goes after (I know, spoilers!) her surviving clique members, making their lives a living nightmare.

Before I spew more hatred for a fictional teenager that doesn't exist, I will applaud this Heather for her choice of green. Perhaps, the color choices really signifies her envy for Heather Chandler, but it's a still a fun and bright color that I don't wear too often.

Sadly I don't have a lot of green in my wardrobe, so I grabbed my padded Lord & Taylor blazer from the day before, and paired it with a green top, a scrunchie (yes I finally caved and got one!) and a red and green plaid skirt. This gave me a modern Heathers-inspired look, without looking like I was stuck in a time warp.

Comments on this look were pretty nice considering I was dressing like the Heather I hate the most. When attending a show at a local theater, I got lots of compliments on my skirt and shoes. Even the 30 year old blazer got some appreciation, as a show attendant repeatedly asked where I got it.

I realize now that four out of the seven outfits I created were inspired by Heather Chandler, but I couldn't resist wearing this Dior blazer one more time. Yes, the shoulder pads are still way too much for me, but the piece really works nicely against the countless plaid skirts I have so very much of. Wearing this out to brunch with family didn't really make a huge impression. I'm sure it's the hair and shoes, as they didn't have that proper '80s feel, but I still feel that I did Heather justice with this outfit overall.

I may not be dating a psychopath or plotting the murder my best friend, but wearing Heathers-inspired outfits is a fun way to honor the film that paved the way for teen-queen flicks like Clueless and Mean Girls. Although I had a really had a hard time finding the right outfits, creating a modern spin on '80s fashion proved to be an interesting, fun challenge. Would I do it again any time soon? Probably not, but I may wear my best Heather Chandler outfit the night TV Land finally airs the highly-anticipated reboot.

More like this
I Tried Kendall Jenner's No-Pants Look As A Plus-Size Woman
By Sarah Chiwaya
10 Times Haley Lu Richardson Dressed Just Like Portia
By Dominique Norman
Hailey Bieber Looks Just Like Princess Diana & I Need To Copy Her ASAP
By Sophie McEvoy
All Of 2023's Biggest Nail Art Trends, According To Top Manicurists
By Jordan Murray
Get Even More From Bustle — Sign Up For The Newsletter
From hair trends to relationship advice, our daily newsletter has everything you need to sound like a person who’s on TikTok, even if you aren’t.