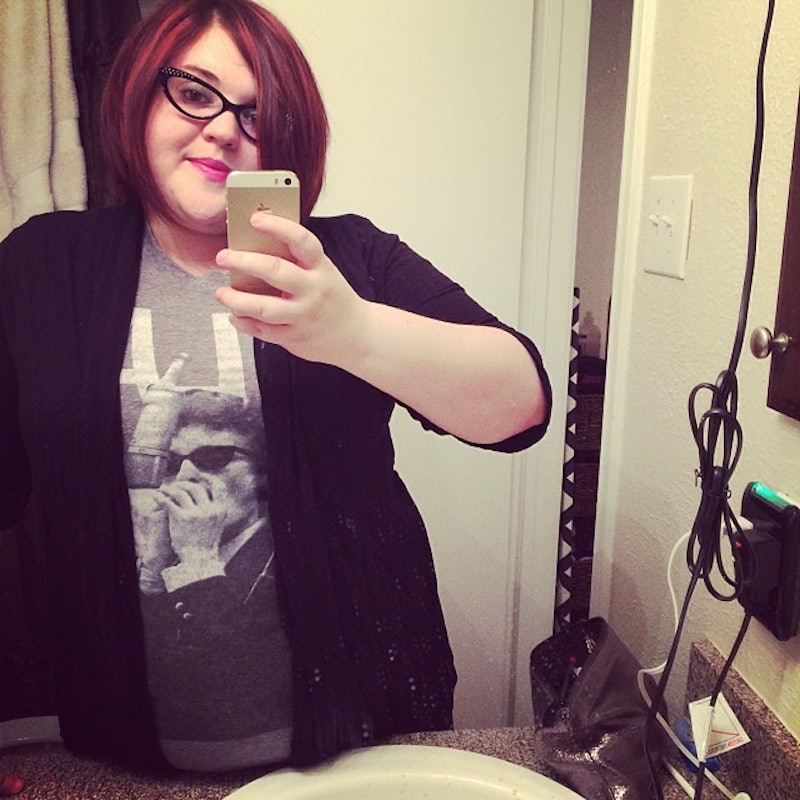 When people think of eating disorders, nine times out of ten, they picture a strikingly thin woman — a drastically thin celebrity, a supermodel-type who eats cotton balls soaked in orange juice for sustenance, or an emaciated woman who starves herself and works out for three hours a day to fit into her size-zero jeans.

I wish it were true that fat people don’t have eating disorders. If it were, I would have never spent all those years chugging coffee, taking too many diet pills, and obsessively counting calories. I wouldn’t have existed for two years on apple slices, string cheese, and vodka. Of course, I also wouldn’t have lost those 60 pounds in my first two years of college, all of which is now back with a vengeance on my stomach and thighs.

When I look back at those years, only now do I see that I had an eating disorder. I was never clinically diagnosed, primarily because I never believed that I had a problem. As far as everyone else was concerned, I was doing well. I was complimented on losing weight, I had tons of energy, and I got good grades. But I wasn’t doing well — I was in a terrible place. I was strung out on diet pills, which caused horrible stomach cramps, refused to let me sleep, and made me generally feel like death. I was a jittery, irritable mess.

I learned quickly that doctors didn’t give a shit how I was losing weight, so long as I was. When I visited the campus health clinic for flu shots or birth control, the doctor always gushed about my weight loss. She never asked me how I was losing weight, if I was exercising, or getting enough vitamins. She never asked if I was taking pills that basically amounted to legal speed.

Almost two years into my cycle of diet pills and cigarettes, depression swooped in and knocked me on my ass. There’s nothing that can convince me that the diet pills weren't a large part of that. The constant swings in hormones, lack of sleep, and God knows what other effects these pills had on my body turned me into an emotional wreck.

I lost interest in school, flirted with suicidal thoughts, and then moved back in with my parents to pick up the pieces. I think I’ve got most of them put back in order, but I am occasionally still stuck by an odd shard of self-hate. I will never not have to fight back the urges to join Weight Watchers and buy the latest diet supplement. Even today, after years of working on my body issues, I sometimes Google shady diet clinics where I know that with $200, I can walk out the door 30 minutes later with a prescription for a big bottle of phentermine.

It’s important to realize that my story is very similar to thousands of other fat people’s stories. I talked with a few friends about their experiences of eating disorders, and their stories were so strikingly similar to my own that they knocked the out of me — the food restriction, stimulants, and all-around body hate. I took comfort in their words, knowing that my story was not isolated or weird or overblown in my own head.

I'd guess that a huge percentage of people who are clinically overweight have a fucked up relationship with food, whether it’s overeating or compulsive dieting, or something worse. Unfortunately, unlike too-thin people, fat people don’t have many places to turn when they realize that they need help.

Last year, a study found that doctors were overlooking anorexia in overweight teens. The research also showed that 35 percent of teenagers who were eventually diagnosed with anorexia started as overweight or "obese." Even though the kids studied were severely restricting their food (one to 600 calories per day, while running cross-country) and losing weight quickly, it took doctors over a year to diagnose them with anorexia nervosa. There is little research on eating disorders in fat adults, which I think only gives credence to the idea that medicine just doesn’t believe that the two can coexist.

Eating disorders in fat people are often seen as a victory of self-control over excess. In my view, this reality means that fat people will suffer more as they linger without a diagnosis. It means that their behavior will be cheered instead of discouraged, and they will be praised for starving themselves and purging what they eat.

I don’t want to minimize the experiences that thin people have with anorexia, bulimia, and other eating disorders, but I do want to make sure that stories like mine are heard. I want fat women and men to have resources for treating eating disorders, rather than having people respond to their illnesses with more dieting advice or a pat on the back. I don't want any more girls and women to feel like they should be OK with being seriously ill, just because they're fat.

More like this
This Psychological Effect Might Be Keeping You From Hitting Your Goals
By Lexi Inks
The 19 Best Tweets & Memes About Bisexual Awareness Week
By Lexi Inks
Help! I'm Not Getting Any Attention On Dating Apps. What Can I Do?
By Sophia Benoit
The 12 Best Strapless Bras That Won’t Slip & Fall Down
By Audrey Williams and BDG Commerce
Get Even More From Bustle — Sign Up For The Newsletter