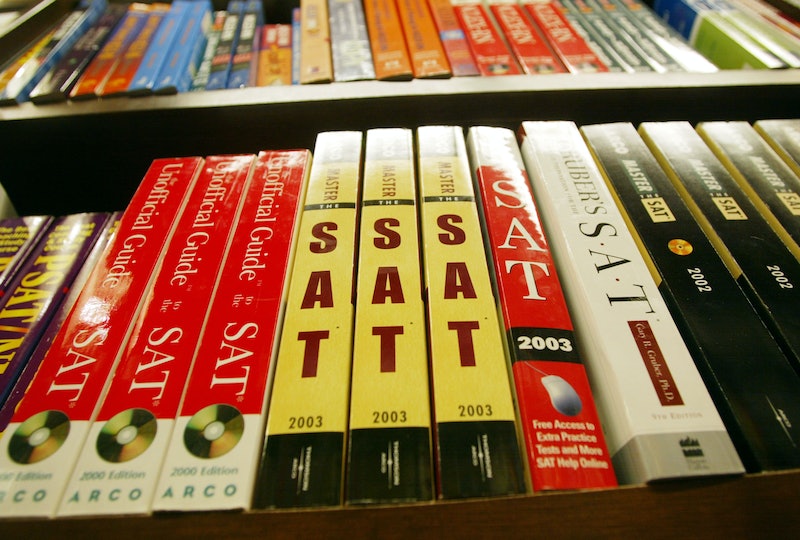 Remember that time that you and several dozen other high school students crammed into a room and took a multiple choice test that would determine your future? Well, it turns out that seventeen-year-old you had even more riding on that test than you already thought. Some employers are now asking for SAT scores as part of the job application process. Geez, if I'd known that then I definitely would have gone back and made sure that high-school Emma got a lot more sleep the night before the test.

Seriously, this is like the worst idea anyone has ever had in the history of hiring practices. Well, this or the casting couch. And yet, according the Wall Street Journal, some major consulting firms like Bain & Co. as well as the banking giant Goldman Sachs, are now asking applicants to dredge up the old scores — and not just those kids applying right out of college, either. Some companies are requesting SAT scores "even for senior sales and management hires, eliciting scores from job candidates in their 40s and 50s."

If I still remember my SAT scores in my 50s, I want you all to have them surgically removed from me, OK? It'll be the 2040s by then, so I expect us to be able to do stuff like that.

But seriously, people have been saying for years that the SATs are a poor measure of even college readiness. For one thing, standardized tests don't actually tell you anything about a person's intelligence or ability to learn. But more importantly, the tests are hugely biased in favor of middle to upper class white kids. It's not enough that colleges already take these things so seriously, now the job market has to care about them, too?

The whole idea makes very little sense. I mean, the SATs were never designed to be used to test your readiness for a job. They aren't even intended to gauge a student's intelligence and therefore can't be used to determine "whether someone has the raw brainpower required for the job." The SATs are crafted specifically with one purpose: to test a student's readiness for college. (And they don't even do it all that well.) So can't we all agree that once you've graduated college it doesn't matter how prepared you were to go?

Plus, I really don't need my editors to see how poorly I did on the Writing section. I just don't.

More like this
Here’s Why Sagittarians Should Pursue A Career In Academia
By Nina Kahn
The Spiritual Meaning Of Angel Number 000, Explained
By Kristine Fellizar
Here’s Your Daily Horoscope For October 6, 2022
By Mecca Woods
Everything You Need To Know About Angel Numbers
By Nina Kahn and Brittany Beringer
Get Even More From Bustle — Sign Up For The Newsletter