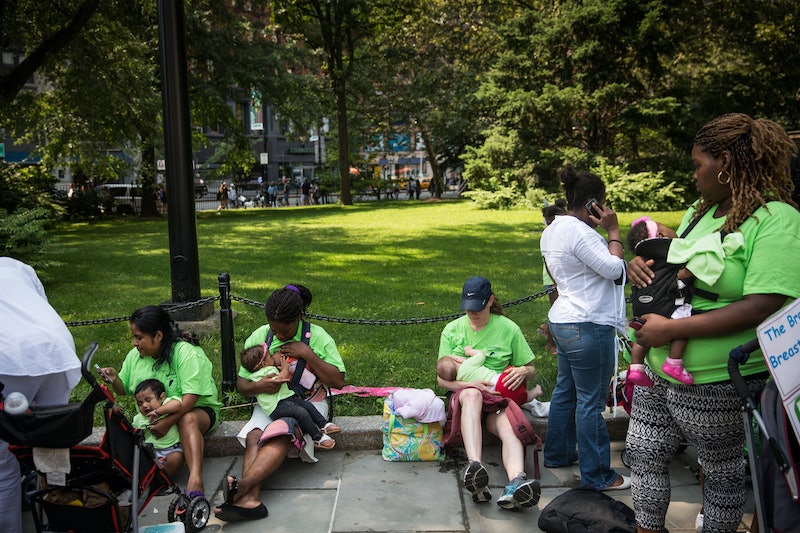 In response to this vitriol directed at breastfeeding moms, activist Diane Levad Whitmire (known as @OhDianeMarie on Twitter) started the hashtag #NursingInPublicIs. On the hashtag, women (and men) shared their experiences of what the reality of breastfeeding their children in public really is.

In an email, Whitmire told me that the “most common and most harmful misunderstanding about breastfeeding in public is that breastfeeding is somehow a private activity. Breastfeeding is intimate, to be sure, but so is holding hands and kissing, and we don’t hide that away.”

She also suspects that sexism plays a big role in people’s revulsion at breastfeeding in public. “Because breastfeeding is seen as a specifically feminine activity, and being femininely human in the public sphere is something that threatens the status quo,” she said. “In decades past public breastfeeding was not under so much of an attack because femininity was more "under control". Women by and large were not invading the public sphere in other ways such as the corporate world.”

Somewhat surprisingly, Whitmire said that the response to the #NursingInPublicIs hashtag has been overwhelmingly positive. She said that she would, though, like to see “more connections drawn between this seemingly minor issue and broader social justice issues.” She also told me that she was no expert in the way that breastfeeding stigma impacts people who are not cisgender, and encouraged transgender and non-binary people to offer their voices and critiques on the issue.

Because I’m not a mom, breastfeeding in public doesn’t directly impact me. It does, however, speak to a broader issue of the way that our society demands feminine modesty, and the expectation that women should cover their bodies unless it’s specifically for the pleasure of men.

In short, rock on breastfeeding activists. No one should feel ashamed for feeding a hungry child, whether they’re at the movies or in the privacy of their own homes.

More like this
How To Politely Reject Someone Who Keeps Asking You Out
By Laken Howard and Lexi Inks
Bustle Daily Newsletter: October 4, 2022
By Hayley Schueneman
Black History Month UK’s 2022 Theme Calls For Action, Not Words
By Maxine Harrison
Chris Kaba's Family Continue Fight For Justice After Viewing Police Bodycam Footage
By Sophie McEvoy
Get Even More From Bustle — Sign Up For The Newsletter