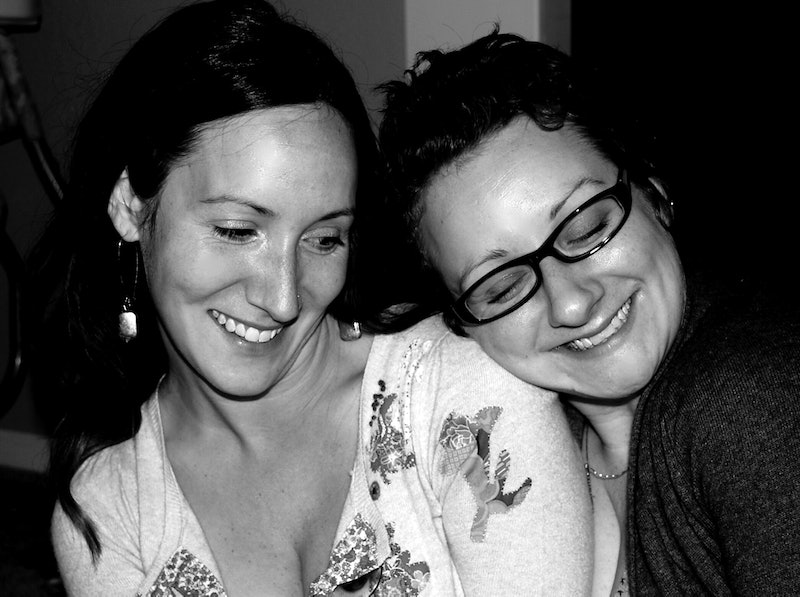 In high school, my sister was THAT girl. Although she was the younger of the two of us, she’d go on dates with the cool boys in my class, and they’d be surprised to find out that she had a sister in their grade. She had an entourage of equally-beautiful clones around her at all times, as if plucked from Mean Girls, and there was no end to male admirers. I, on the other hand, was known as just Jennifer Chatel’s sister.

My sister, for lack of a better word, was perfect. Not just physically (she really did score in the genes category) but as an overall student, too. While I obstinately refused to make an effort in math and sciences, my sister, already wanting to be a lawyer then, did well in all her classes. And when I say “well,” I mean that nothing less than an A was acceptable for her. Into our prospective rolls we fell: my sister the great student and beauty — and me, the outcast.

You would never have guessed that my sister was even unhappier than I was.

"You’re just jealous of your sister because she’s thinner than you," she said, "That’s why you keep making up these lies." As I learned later on, it was the denial and fear talking; not my mother.

It was sophomore year in high school when my sister first started throwing up. I knew it was happening because I not only heard her on more than a few occasions, but also walked in on her. At first, it was sort of a joke between us; a "so now you’re going to be some walking After School Special ?" type of denial. She chalked it up to school stress.

What I'd hoped was just a phase began to worsen. Her weight began to drop; her eating habits changed. The throwing up went from occasional, to after almost every meal.

I felt trapped. Was I really alone in knowing her secret? Did my parents really have no clue? I was terrified to tell them. What if I was misunderstanding the situation? My best friend in the world was hurting herself, and I was torn between keeping her secret — our sisterly pact — and telling anyone who would could help.

Every time I’d call her out on it, my sister would say it was only happening in my head. I was the one with the problem, and a part of me began to believe it.

As a 17-year-old, I was not equipped to handle the situation in any way. For the first time in my life, I couldn’t talk to my sister about something, and what I was trying to tell my parents was falling on deaf ears. There was even a moment when, after having pleaded with my mom to do something about my sister’s eating disorder, my mother accused me of being jealous.

"You’re just jealous of your sister because she’s thinner than you," she said, "That’s why you keep making up these lies." As I learned later on, it was the denial and fear talking; not my mother.

The obvious signs of bulimia weren't visible: my sister's hair wasn’t falling out; her teeth weren't rotting. I think my mother hoped it would pass. She had to believe it would pass.

After high school graduation, my sister attended the University of Colorado at Boulder. Since I had made the choice to go to college close to home, I was still able to see her almost every weekend, but now, things would be different. I would no longer be able to save my baby sister — not that I had been able to when I was around. I thought a new life in a new state would do her good, and did all I could do: I hoped for the best.

In college, her bulimia got even worse. She became friends with a woman who was also bulimic. What was once a strictly private affair for my sister was now something in which she no longer had to feel alone.

It was after I graduated from college and lived in Boulder with my sister for a few months that realized just how bad things had become. To watch her and her friend mention that they’d have to puke that up later ("sarcastically," of course) was terrifying. Arguments ensued, and her friend told me that I was the one with the disorder. I was the one who must like to puke up my food. Once again, I was the crazy one.

Not long after I left Colorado, my sister’s friendship with that particular woman came to an end. She became an English major, and through her writing, she was able to finally confront her disorder. She also fell in love with a fellow a writer, one of those sensitive types with whom she could be honest about what was going on.

She finally had an understanding of who she was, what she wanted, and how she planned to get there. She finally had the control in her life she craved, and it didn't involve food. Then, and only then, were my sister and I finally able to talk about her disorder.

During this National Eating Disorder Awareness Week, we need to realize that eating disorders touch all of us, whether we have a disorder or not. We must approach recovery as sisters.