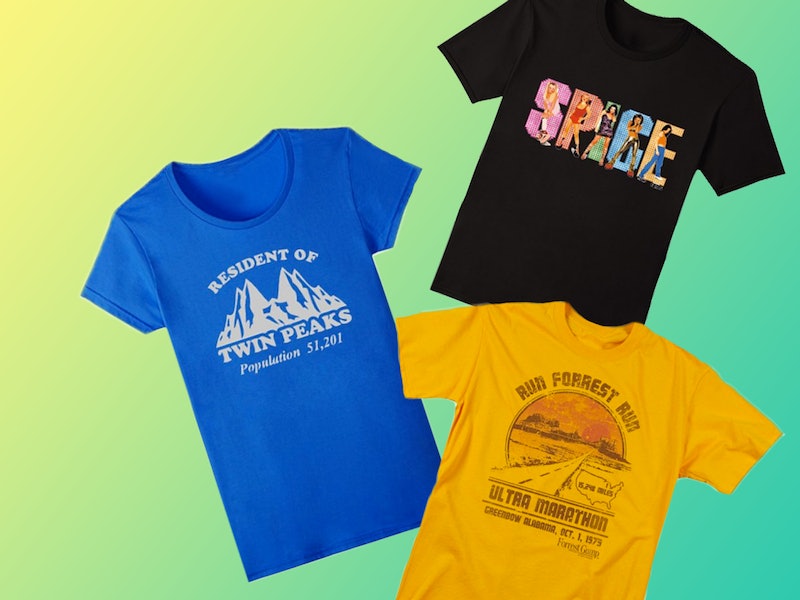 The styles from the '90s are making a comeback in a big way right now. And as a '90s girl myself, I think it's time to embrace the past (especially where '90s fashion is concerned) and show the world that you still love everything about the decade you grew up in. And what better way to do that than rock a throwback '90s fan girl shirt because (let's face it) it'll look so much cooler now.

The '90s were filled with boy bands and girl power. They introduced us to characters that people still remember 20 years later. There was Michelle Tanner and Cher Horowitz. There were huge fandoms born during the '90s. You could pretend you lived in Twin Peaks or that you went to school with everyone's favorite vampire slayer.

Whatever it was, the '90s were arguably "the last great decade," so why not celebrate it now? Instead of making your next #TBT post one of you rocking a shirt back in the day, put one on now. Reach for your favorite '90s inspired fan shirt and show everyone that you're proud to be a '90s baby. The vintage looking shirts will spark a bit of nostalgia for you and for those who see it on you, plus, you'll look super awesome.

One of my favorite things to do before going to bed is watch a bunch of Full House reruns. There is just something about the Tanner family. You always learned something from watching that show (cue the music and the Danny Tanner speech), but perhaps the best part were the girls' one liners. Each character had their own line, but nothing beats little Michelle Tanner saying, "You got it dude!" and giving a thumbs up. This witty shirt is awesome, as it comes complete with Michelle's famous pigtails.

Twin Peaks may just be the ultimate cult classic of the '90s. It is known as one of the greatest shows of the decade and has been on several lists of shows that were "cancelled too soon." The quirky characters and eerie storyline hooked people and left them wanting more. The show was made into a movie shortly after the show was cancelled. For all of those Twin Peaks fans out there, the show will return to Showtime in 2017 for a limited series.

Another movie that is constantly quoted today is Forrest Gump. Everyone fell in love with Tom Hanks in this movie, and Forrest Gump still has a hold on the world today (I recently saw a Bubba Gump Shrimp location in Hong Kong!). Whenever I click through the channels on TV and I see that the movie is on, I watch it. My favorite part of the movie? When Jenny screams "Run, Forrest! Run!" So, why not rock this shirt at the gym or during your next workout? Forrest Gump inspired you to run.

So many things from the '90s get rebooted these days. And while Jurassic World lived up to the hype, there is nothing like the original. Michael Crichton and Steven Spielberg gave us one of the greatest blockbusters, Jurassic Park. Show everyone how much you love the classic by rocking a cool graphic tank with the park's logo on it. You can pretend that you got to tour the island theme park before everything went wrong.

Another great show that always has a rerun on? The Fresh Prince of Bel Air. And while the show is hilarious to watch, anyone who ever saw it will know all the lyrics to Will Smith's theme song. I'm sure that as soon as someone recognizes the lyrics on your graphic T-shirt, there will be an impromptu karaoke session wherever you are. The shirt comes in eight colors, so choose something that shows your personal style — just like Will would.

The Battle of the Boy Bands

The '90s definitely were the age of the boy bands. Between *N'SYNC and the Backstreet Boys, every pre-teen girl had someone to be in love with. (Plus, *N'SYNC gave us Justin Timberlake, so there's that.) Show your friends which band was your favorite by either rocking a Backstreet Boys long sleeve shirt (it's lined with terry cloth, making it super soft) or an *N'SYNC crop top with your favorite album's cover art on it.

One of my favorite movies of all time is Clueless. I definitely wished that I had Cher's closet and hoped that I would be as cool as she was when I got to high school. But, my real reason for loving the movie? All of the amazing one liners that came from it. From the famous "As if!" to "Whatever" to "You're a virgin who can't drive," people still quote the movie over 20 years later. Wear your favorite line on your shirt — it's a perfect conversation starter.

The Spice Girls were the ambassadors of the world when it came to girl power in the '90s. They kicked ass, made great music and were actually friends. I remember when Spice World came out. It was the day of my seventh birthday party. Everyone put Spice World Lollipops in their presents for me. I would totally rock this shirt.

Britney Spears was the Queen of the '90s. Baby One More Time was an anthem for girls everywhere. I was definitely Britney Spears for Halloween multiple times over the years based off of that iconic music video. People fell in love with the pop star, and it's crazy that she is still doing her thing after all of these years. Get a throwback tee that shows off Britney back when it all started and she was 16.

The Truth Is Out There

The X-Files is the longest running sci-fi TV show of all time. And no surprise — it got its start in the '90s. It began as a cult favorite but quickly turned into a major stone in the foundation of popular culture. The tagline of the show became, "The Truth Is Out There," and each episode featured a different paranormal phenomena, finally giving sci-fi lovers a show that was made for them.

Before Twilight, True Blood, and Vampire Diaries there was Buffy The Vampire Slayer. The show was actually based off of a movie with the same name. It ran for seven seasons with Sarah Michelle Gellar at its helm. She played Buffy, a kick ass young woman who battles demons and vampires. This show is definitely responsible for sparking the obsession that pop culture seems to have with vampires, and now you can pretend you were a part of the Slayers Club.

Bustle may receive a portion of sales from products purchased from this article, which was created independently from Bustle's editorial and sales departments.