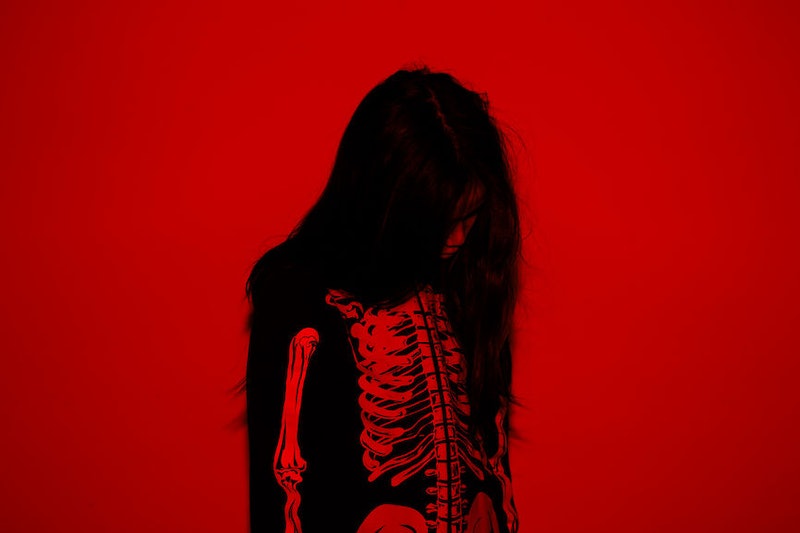 Emo was arguably the last true subculture of the Millennial generation — and, if I'm being honest, one of the most unfashionable. Until now, that is, since we're experiencing many early 2000s emo trends making a comeback in the sartorial scene. As a diehard emo for many of my formative years, my jeans were so tight that my teacher once told me I’d become bow-legged, while my bangs were so large that they covered one eye and sparked fears from my mother that I’d eventually end up half blind. Perhaps naively, I was convinced I’d be forever wearing studded belts, dyeing my hair into coon tails, and rocking sarcastic slogan button badges.

However, in a move arguably no one saw coming (least of all me), emo is officially back. From false hope of a My Chemical Romance reunion to the plethora of heavy metal-inspired hoodies and Marilyn Manson T-shirts finding their way onto the backs of pop culture icons and street-style bloggers, the clothes I wore as an awkward, bullied 13-year-old are actually in vogue. Even if they're here about 10 years too late.

Most hardcore emo kids probably still have remnants of the movement in the backs of their wardrobes regardless. I, for one, never quite plucked up the courage to put down the eyeliner pencil. But for those less seasoned in the early ‘00s subculture, here are 11 items that'll probably be in your wardrobe soon — if they aren't already.

The ultimate middle finger up to the establishment, you can pair a hoodie with huge hair and a swept-over fringe and you'll never need to make direct eye contact again. The goth-emo-metal hoodie is having something of a moment, in part thanks to cult Parisian label Vetements.

For his fall 2016 collection, Marc Jacobs fully embraced emo. This eyeliner look may seem a little OTT, but too much black smothered on your eyelids and lips is never enough. This beauty look even has me hunting for my surely-past-its-expiry-date black lipstick.

Another gem from Marc Jacobs, striped tights are back with a vengeance, although I won't be digging around for my neon green and black pair at the back of my wardrobe anytime soon. Come winter, I'll definitely be rocking a subtler gray and black pair, though. With extra emo points for holes and rips, of course.

From jackets and T-shirts to Converse and wristbands, not an inch of my clothing was free from the pinhole of a button badge growing up. The market has significantly expanded since my teenage-hood, however, and though I may be more likely to sport a sassy feminist pin than a sentimental lyric-laden emo one, they still have a place in my heart.

Perfect for a nostalgic throwback to the days of MySpace, this pastel update on the iron-on patch is totally wearable (though perhaps not un-ironically) in 2016.

Converse are the shoe almost every subculture took under its wing, but emo kids truly put their own stamp on the all-American-footwear. You know, by defacing the shoes' rubber soles with marker pens as part of the course in emo-initiation.

7. All Animal Print Everything

If your trousers didn't cut off circulation to your legs, they weren't tight enough, and zebra stripes or animal prints weren't just patterns to be worn on your clip-on hair extensions. The upcoming H&M x Kenzo collaboration is taking all animal print everything to the next level, however, with full outfit zebra prints hitting stores this fall. Personally, I can't wait.

Because you need something to attach all of those iron-on patches and badges to, duh.

Fresh from the recent and elusive announcement in the run-up to the 10-year anniversary of the band's now iconic album Welcome To The Black Parade, Etsy and other online retailers are currently swamped with unofficial, updated versions of my personal favorite emo band's merch.

To be worn outside of your trouser's belt loopholes and slung below the waistline, there's no official explanation as to why fully-studded belts became so popular during the early '00s. But they're back and better than ever. However, I don't think I'll be opting to experience the pain of sitting on a full set of studs anytime in the near future.

Emo girls by no means invented the tattoo choker trend, but this remnant of '90s style looked just as at home on us as it did on Spice Girls and Lizzie McGuire fans.

Whether you choose to rock all of the above items or make a subtle hint at your past with just one or two is up to you. But there's no denying it: Emo's back. How long this second wave shall last, however, is yet to be seen.