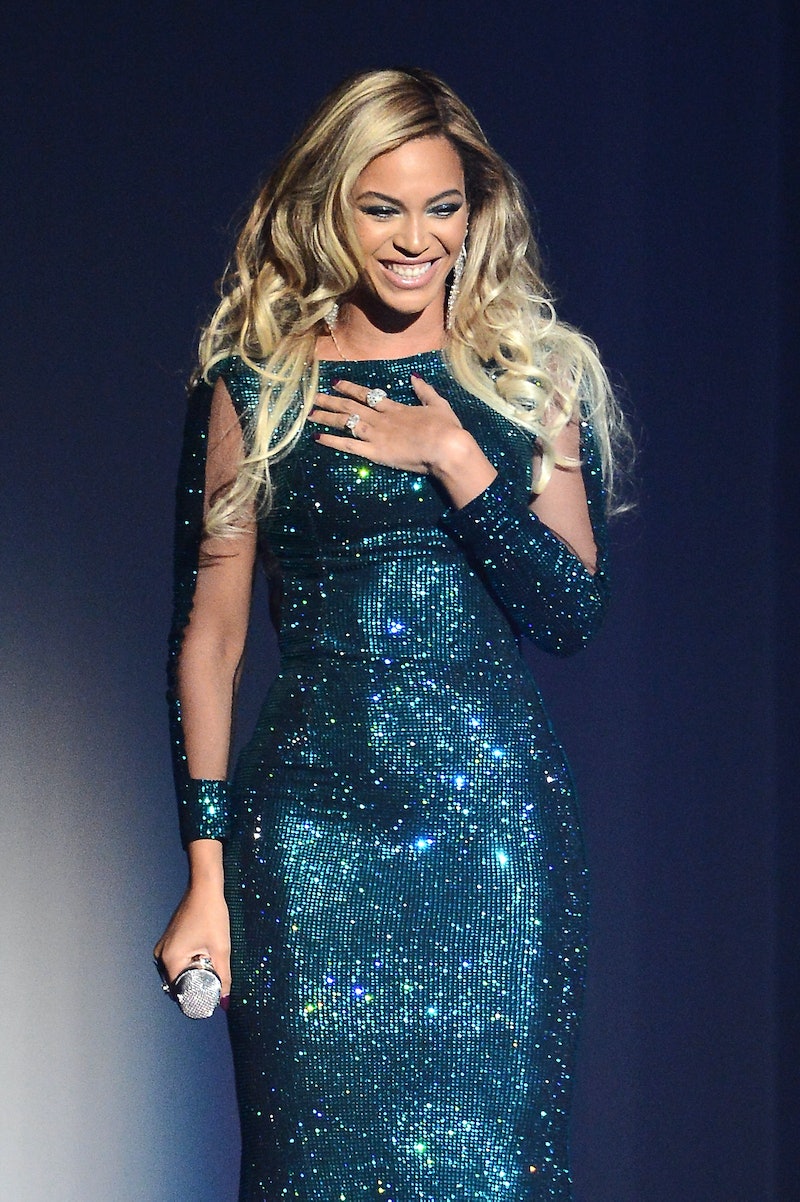 Being glittery isn't just for the holidays. Hey, it isn't even just a look: It's a lifestyle. IMO, it takes a certain kind of person to rock a lot of glitter, which means it isn't that surprising when particular celebrities rock all glitter everything. I mean, if there's ever an opportunity to wear glitter from head to toe, then it's got to be on a red carpet, right?

Some of the celebrities on the following list probably seem obvious. After all, Lil' Kim's early 2000s looks featured a lot of glitter, all the time. But there are others that you probably wouldn't have expected. Nonetheless, there are plenty of celebrities embracing all things sparkle, and proving that the aesthetic isn't one to be limited to the era of Santa Claus.

Regardless of the celeb's stance on the glitter commitment scale, all of these outfits are brilliantly bright and still in tune with every individual's personal style. If you ask me, all-glitter everything can be translated into any style — and my case in point rests with this list of celebrities rocking the all-glitter look.

Even if you're not a glitter obsessive like myself, you can hopefully appreciate these all-glitter ensembles from numerous red carpets over the years.

This Beyoncé gown isn't just your standard glittery dress, but a look that totally transforms Bey into an actual mermaid.

Is it a dress? Is it a two-piece? Who cares? This glitter look from the youngest Keeping Up With The Kardashians star was to die for.

If there's any singer who does showgirl outfits better than the rest, it's Britney Spears.

This jumpsuit is everything I've ever dreamed of and more. Gigi Hadid took a step back from her usual stripped-down style and totally killed the glamour look.

Tilda Swinton used this red carpet opportunity to prove that glitter can totally be androgynous. This beautiful, shimmery two-piece is truly everything.

In this beautiful gown, Vanessa Hudgens showed us that all-glitter everything can be just as subtle as it can be in-your-face.

A glitter look consisting of three different glittery items is exactly what I'm all about, and Laverne Cox looked stunning in every piece. As she does in everything, TBH.

This asymmetrical glitter jumpsuit worn by Jessie J in 2012 has stuck in my mind for the past four years. Where the hell can I cop one?

The delicate nature of the floral collar and simple shape makes this glittery ensemble so preciously pretty that it stands out much more than a standard sequined gown might.

Ruby Rose's glitter suit gives me all kinds of suit envy. Before this moment, I couldn't have cared less about suits.

Not only did Katy Perry put together an all-glitter everything look, but she added a theme on top of it. That's the kind of outfit dedication that I'm looking for in my celebrities.

I think it's fair to say that while all of these celebs were rocking a lot of glitter, none of their looks ever overlapped much. In fact, they all managed to make the looks entirely their own. Whether that's the magic of glitter or of good stylists is up to you to decide, but I'm leaning towards the former.