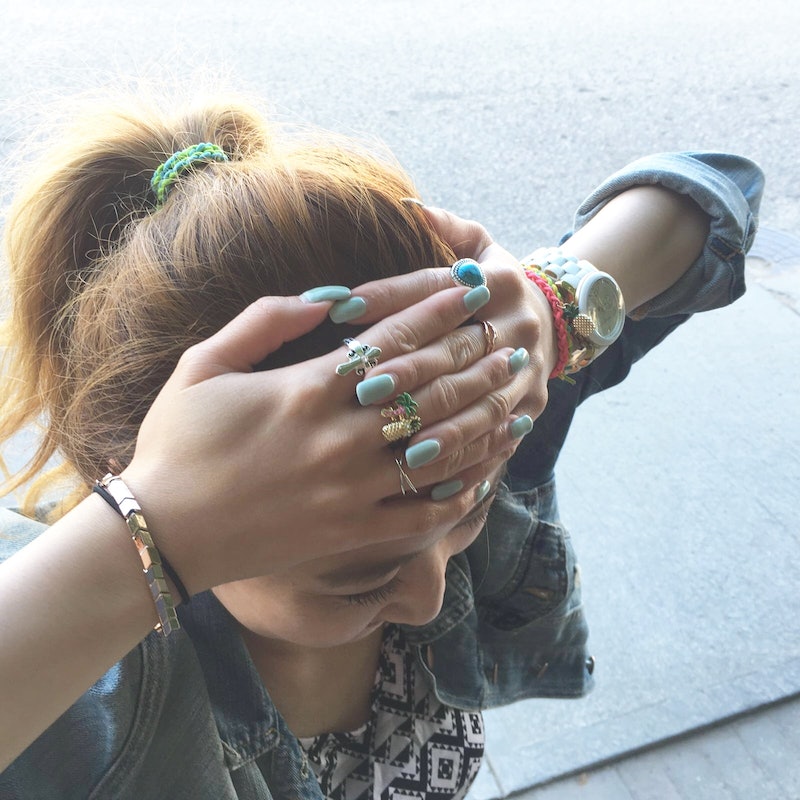 When I was just discovering my own personal style, every visit to the mall included a trip to browse the accessories at Claire's. The store was undoubtedly the epitome of my pre-teen style. But recently — now that I'm well into adulthood — I began to wonder what it might be like to accessorize with items from Claire's for a week.

I yearned to learn whether folks would realize that I was opting for "childish" embellishments, and was curious about what sorts of reactions they might have to a fully-fledged grownup wearing items from a shop that seems to proudly represent the pre-teen and adolescent demographic. What's more, I wondered whether I would feel comfortable wearing said accessories, or if instead I'd just question whether I've matured throughout my 20s as much as I previously thought.

Before I began this experiment, I purposely stopped wearing accessories (except my watch) just to see if this would have more of an impact on people's reactions. Although I barely wear accessories anyway, I made a conscious decision to steer clear of anything superfluous.

With my Claire's accessories for the week all planned out, I took a deep breath and jumped headfirst into the experiment. Here's how my week played out.

On day one, I went into things with the mantra "go hard or go home" by rocking different rings, earrings, and bracelets. I wanted to set the precedence for the rest of the week, after all.

To be honest, I loved the idea of sporting accessories for a change. However, I was annoyed when it came to putting too many on all at once. I felt overly decorated, kind of like a Christmas tree. But I really wanted to see if I would garner any reactions, so I swallowed my pride and walked into work anticipating some side-eye.

Instead, I actually got complimented for my rings throughout a good majority of the day. A female co-worker noted that the jewelry really highlighted how great my nails looked. A male co-worker, on the other hand, said I was wearing "bare rings," which I'd like to think was a compliment of some kind, or perhaps a really animated observation.

As I headed home after spending the day hearing how great my rings looked, I realized that no one really asked about where my accessories were from. On the way home, however, I ran into another co-worker who actually noticed that I had earrings on and loved that they were of turtles. This was a small detail that I myself had forgotten.

I walked into day two feeling a little excited. Would I be teased for continuing to overly-decorate my fingers? So far, I was really digging wearing rings because they made me feel a lot more dressed up than usual. What I didn't love about the process was taking the rings off every single time I washed my hands. Call me a little neurotic, but I didn't want them to get oxidized too quickly.

As the work day continued, I purposely wore my hair up with a super colorful hair tie. I was hoping that folks would say something, even if it was teasing. To my surprise, there was nothing.

However, I did receive a compliment on my bracelet from my friend who actually asked where I got it from. She did seem a little surprised that it was from Claire's, but not in a particularly judgmental way. With day two finished, I knew that I really had to switch things up for the next few days.

Day three saw the emergence of the ring watch. I had been saving this particular accessory for the middle of the week because A: I felt that it would garner some major reactions and B: I had my eye on this accessory for a while, so I was pretty excited to finally wear it.

As I wanted the ring watch to be the highlight of the ensemble, I kept everything else to a minimum. This, unsurprisingly, was a day for getting super mixed reactions. My male co-workers were teasing me for wearing it. With perplexed looks on their faces, they seemed to downright question my choice in style.

On the other end of the spectrum, my female friends actually gave me compliments for the ring, repeatedly saying it was "cool." I appreciated their positive responses, since this was definitely not a "trendy" accessory amongst women in their 20s.

By day four, I was getting used to the idea of wearing a lot more accessories. I decided to rock the ring watch for another day to see if I would get any new reactions from it, and it did, indeed, continue to be the star of the show. People had both good and bad things to say, and I continued to get teased by male co-workers who questioned why I would wear such a "ridiculous" piece.

More and more, people started asking me where I purchased my accessories from as well. This was what I was waiting for! All of them seemed pretty surprised that everything was from Claire's. Since I'm not in my pre-teens, they were clearly a little taken back by the idea that I would rock this store's pieces. I was starting to love surprising people.

As day five rolled around, I was really getting used to the idea of wearing rings on the regular. I liked how they decorated my hands, and since my job pretty much requires me to be on the computer all day, it was nice to feel a little more dressed up than usual.

However, I still didn't enjoy taking them off every time I washed my hands. Yet the germaphobe in me always has to make sure to take off accessories before going to the bathroom and before washing the dishes. I didn't want the rings to change color during the experiment, either, since I was growing kind of attached.

I'm pretty sure that by day five, everyone grew used to me wearing accessories since there was no reaction to be heard. My Claire's pieces were becoming the norm.

Day six was the day of my elementary school friend's wedding. So in true journalistic fashion, I had to sport some Claire's accessories to see if anyone would be observant enough to ask where I got my jewelry from.

It was a pretty ambitious thought, I know. But I was looking forward to wearing jewelry from Claire's for a wedding — just like a real adult.

As anticipated, there were no reactions. With day six behind me, I was ready to take on the last day.

At last, day seven was here. Spending a whole week wearing accessories from Claire's was definitely interesting. It peaked a lot of fascinating reactions (particularly from male co-worker's) and I soon realized that I'd still be wearing the accessories post-story.

Since I had spent a week decorating myself with these accessories, I didn't receive any strong reactions, though.

So What Did My Week Of Claire's Prove?

I was really excited to take on this experiment preliminarily. Thinking of Claire's takes me back to a time when things were simpler than the mundanities of adulthood. But I was also curious as to whether Claire's has evolved from being just a pre-teen go-to. Its accessories, in fact, proved to be fun, trendy, and definite conversation-starters.

I was hoping that the jewelry would be well-received by those around me, and for the most part, it was. But it's curious that my male co-workers were the ones who actually seemed perplexed as to why I would sport a watch-ring instead of a regular watch. My female co-workers, on the other hand, seemed to love the idea of such interesting pieces.

These reactions proved that, for some people, anything that seems "out of the ordinary" (even something as simple a ring watch) is often considered straight-up weird and unnecessary. While it's not something I will likely wear every day, my new watch ring is something I'll have in my accessory rotation now.

Personal style is supposed to be exactly that, right? Personal. And when it comes to me, well, I'll definitely be picking up a thing or two from the teeny bopper haven moving forward. Even if some folks think I'm weird for it.