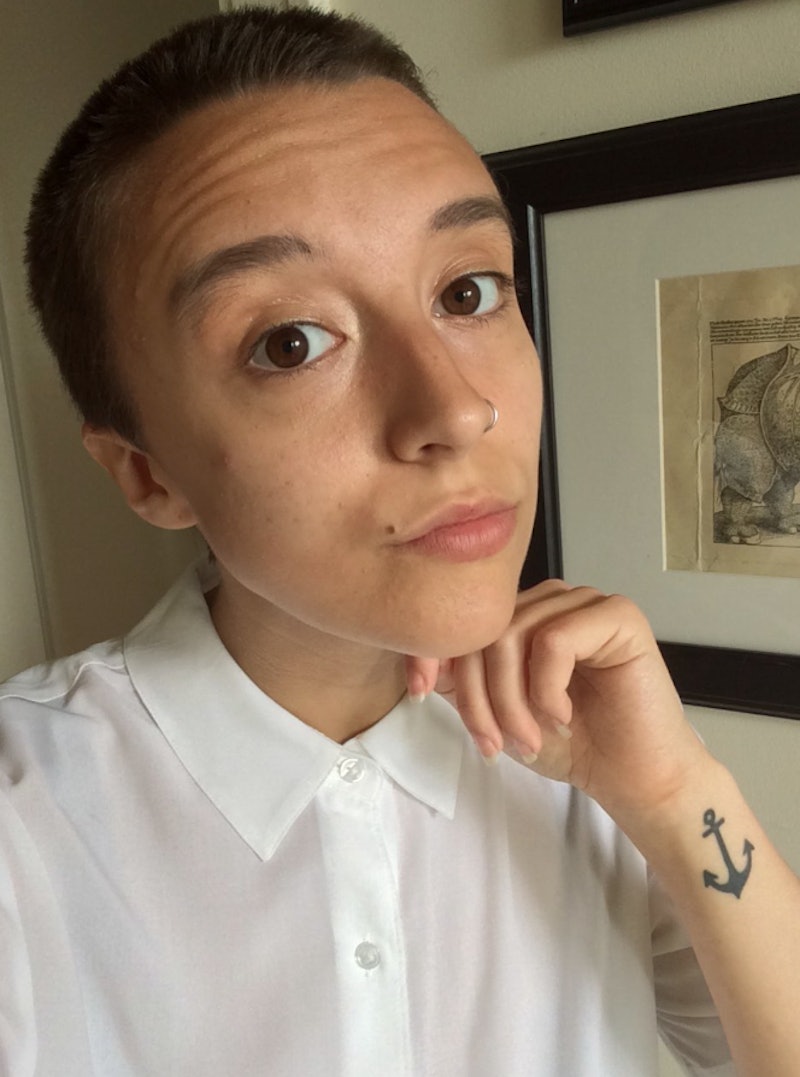 Lately, I've grown tired of being told to love my body exactly how it is. As a person who embraces and tries their best to exemplify body positivity every day, I appreciate much of the rhetoric of mainstream efforts in self-love. But as a trans person, mainstream body positivity seems to invalidate my gender dysphoria: A feeling that doesn't quite mesh with "all bodies are good bodies" or "love the skin you're in" mentalities. The more I consume mainstream body positive media — which is largely dominated by cis people — the more I grow confused about how I should and shouldn't feel about my breasts and vagina.

Body positivity rooted in activism has generally been a life-saving force in my life, helping me mold the critical way I looked at myself in the mirror into a more forgiving and loving gaze. The philosophies I've seen expressed by cisgender proponents of body pos and the mainstream community at large have honestly helped me own my masculine identity, my nude body after my assault, my sensitive skin, and my jiggly belly.

But unfortunately, there is not a ton of queer representation in the movement. Many of the the queer and trans people I know IRL, despite my best efforts, just cannot seem to get behind the notion of contemporary, media-based body positivism. And that's largely due to the fact that body dysphoria and gender-affirming procedures so often get left out of the conversation.

When I first heard this criticism, I didn't exactly notice what was amiss within the movement. Comments like, "It's OK that I hate my body" from LGBTQIA+ folks didn't resonate with me since I strive to do the opposite every day — so I quickly dismissed them.

Over time, however, I noticed that such discourse was common enough to deserve better attention — something that came in conjunction with my own increasingly complicated relationship to body positivity as it pertained to my boobs.

I haven't identified with my breasts since the day they started growing at age 11, but I had grown to believe that learning to embrace them as they were might be the answer to my lifelong struggle. Once I started strongly considering binding and top surgery in my college years, I contemplated whether moving forward with these actions would hinder my path to truly accepting my body. But when I actually tried binding — and hated how it looked and felt — I wondered whether my discomfort came out of preference, mainstream body positivity, or both.

The reason that I and many other trans folks I know are turned off by the mainstream manifestations of the movement is that our experiences with dysphoria are usually removed from the "love your body now" ideology. Gender-derived discomfort within our own forms often puts us at odds with catchphrases like "your body is perfect exactly how it is."

While many genuine activists of body positivism — particularly in the fat and queen spheres — push the idea that all bodies are worthy of tolerance, discussion, and representation, the co-opted version of the movement usually dismisses any deeper thought beyond "all bodies are good bodies," regardless of the unique trans experience.

Sure, the message is generally positive. But, to me, this assertion now comes across as bullying-esque as a men's rights activism troll preaching that transmasculine folks are nothing more than "women who hate themselves." The thing is, people can love themselves while still feeling dissociation with the experience of inhabiting the body they were born in. It's not necessarily that trans folks who use hormones or get bottom surgery despise who they are. Rather, it's that many of these bodies can become liberating bodies when we make the necessary adjustments to help them reflect how we feel inside.

Because much of the mainstream movement seems to consist of cisgender people who cannot fully understand dysphoria, let alone the validity of being body positive and simultaneously dysphoric, I want to see strides towards a greater understanding of trans folks beyond accepting the gender presentations and beauty choices of all humans. I want to see the mainstream movement acknowledge dysphoria as an experience that many trans and nonbinary folks live with, rather than a symptom of body negativity. When your gender identity doesn't match the gender signifier on your birth certificate or the genitalia between your legs, you may want to change that out of self-actualization rather than self-loathing.

When my dysphoria is perceived as body negative, it only fuels me with guilt on top of my dissociation and dissatisfaction. I scold myself for condemning my breasts or vagina because "gender is a construct" and boobs are what you make of them. But regardless of whether or not gender is a construct, its social conceptualization has real-life ramifications.

Most people associate breasts with femininity, and therefore call me "girl" and "she" when around me. But this only further damages my self-image. Considering where the mainstream body pos movement is as of now, I feel trapped between transparent, useless catchphrases and the guilt that I'm not setting a good enough example for my followers and friends by not identifying with my genitals or breasts.

Personally, would feel more empowered in my body and in my body pos journey if I heard that hating your boobs is OK; that I can love myself and my body while sometimes wishing my breasts didn't exist; that top surgery can be a body positive act.

I desperately want to look in the mirror and enjoy the comfort of a body pos mantra when I feel strange about my chest, using a phrase I can actually identify with, like, "My breasts do not make me a woman," "my boobs are masculine," or "maybe they'll be gone soon." Because no amount of screaming the words, "I'm perfect exactly as I am," is going to change the fact that I'm masculine and that my body doesn't match that feeling.

More like this
The 19 Best Tweets & Memes About Bisexual Awareness Week
By Lexi Inks
Help! I'm Not Getting Any Attention On Dating Apps. What Can I Do?
By Sophia Benoit
An Honest Review of MeUndies Boxers, According To A Non-Binary Person
By Megan Lasher
Pro Footballer Zander Murray Is "Blown Away" By Support After Coming Out
By Sam Ramsden
Get Even More From Bustle — Sign Up For The Newsletter