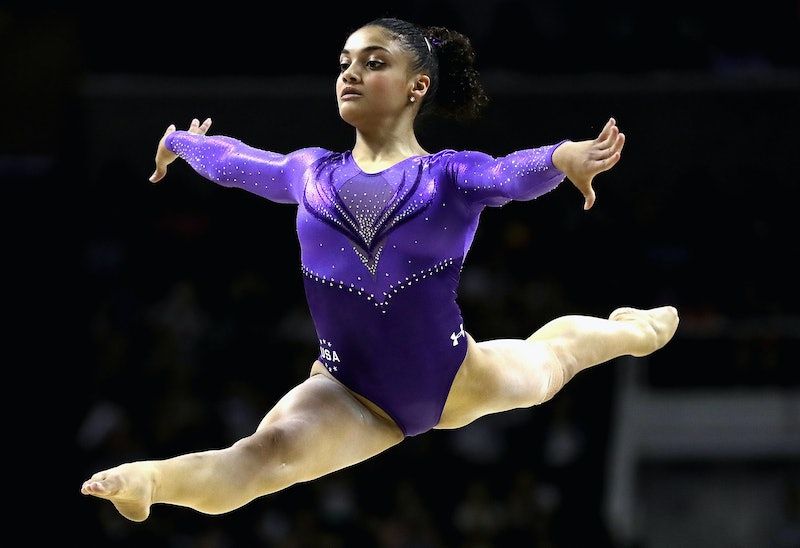 She may be new to the senior leagues (up until a few months ago, she was competing at the junior level), but a certain Olympian is already raising eyebrows with her powerhouse athleticism. She's definitely someone to watch... and no one should miss when Laurie Hernandez's gymnastic events are at the Olympics. The whopping and unprecedented 6,755 hours of coverage is a lot to keep up with and the Rio Games broadcast schedule is somewhat exhaustive, but I've got you covered with exactly when to tune in.

After finishing second to Simone Biles in the qualifying trials, Hernandez has proven herself as a true force to be reckoned with, even within the US women's gymnastics team's virtually undefeatable framework. And, in addition to racking up some serious scores, she also won many a heart with her personality-infused floor routine — watch the clip of her performance, listen to the crowd roar, and there'll be no doubt in your head that Hernandez is a true fan favorite, in the best sense of the words.

So, how to catch the youngest gymnast from this year's Olympic squad? Well, luckily for us, she'll likely be competing in a whole host of events, thanks to her major abilities to nab high scores.

Only two athletes from each country are allowed to compete in the all-around final — Biles almost certainly has one of those spots, but the other is still up for grabs. It's unclear who will nab the coveted position, but Hernandez definitely has a shot — after all, she finished second in the event at the qualifying trials, and Team USA reports that she's a "favorite to contend for an all-around medal at her Olympic debut, should she make the final." Whether or not she ends up making the final cut, you can catch the all-around final on Aug. 11 at 3:00 p.m. ET.

Hernandez finished seventh on uneven bars at the Olympic Trials, due to an unfortunate stutter during her routine — but Team USA still says she has a shot of competing in the final, which will air on Aug. 14 at 1:00 p.m. ET.

Hernandez won gold for the beam at the Olympic Trials, so she's definitely going to be a real contender in this final. If you want to see her give teammate Simone Biles a run for her money on the beam, tune in on Aug. 15 at 1:00 p.m. ET.

Her floor routine brought down the house at the qualifying trials, so there's no reason why she shouldn't wow Rio with a similarly ultra-energetic performance at the floor exercise finals, which will air on Aug. 16 at 1:00 p.m. ET.

No matter when you tune in, you'll want to catch Hernandez wowing Rio and those watching around the world with her talents.