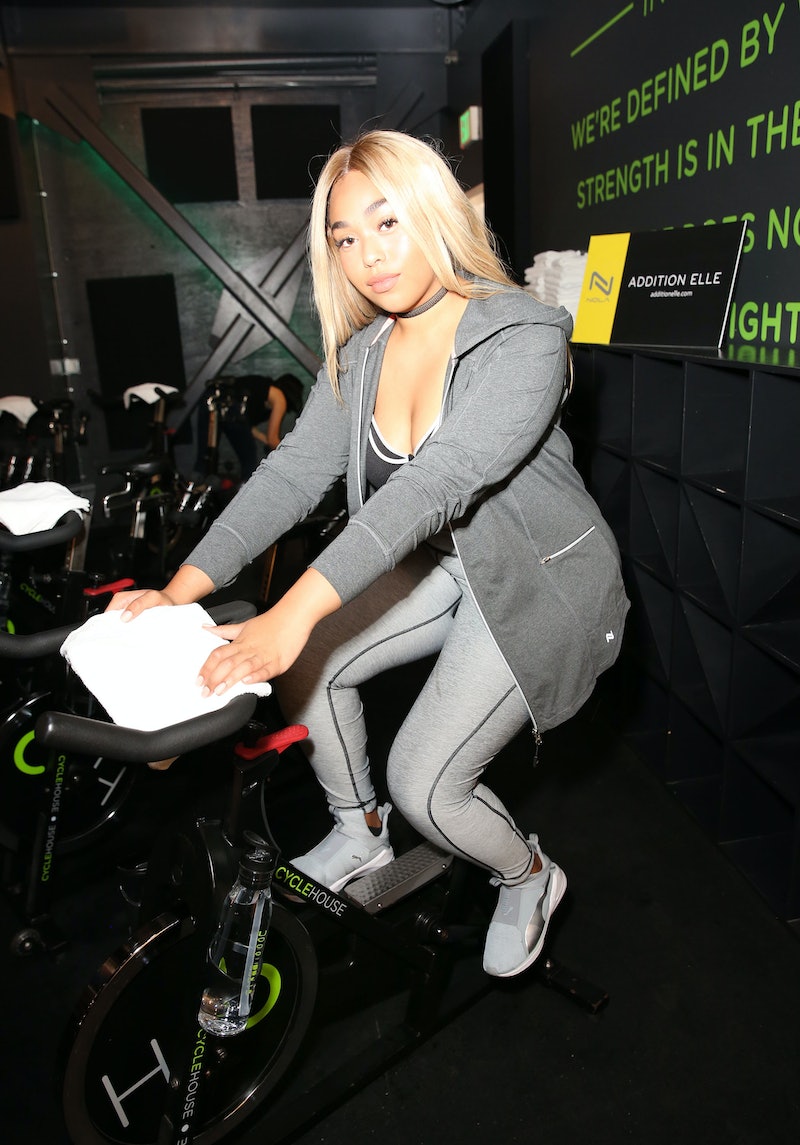 There are many reasons to be jealous of Kylie Jenner. From her insane following to her makeup empire, what's not to be green with envy about? But I'd argue that the coolest part about being Kylie is that she gets to be best friends with Jordyn Woods. I had the chance to sit down with the up-and-coming model at Cycle House LA where she was promoting her new NOLA by Addition Elle activewear campaign with Ashley Graham. She was cool, sweet, funny, and smart — all of the qualities you'd hope for in a BFF. Not only that, Woods was extremely supportive of her beauty maven buddy.

When I asked Woods what her favorite Kylie Lip Kit was, she had to take a second to think. "It's so hard because now there's so many colors," she tells me. "Of course, a classic — Candy — is my favorite, but right now, I'm also really into Ginger, which is her new color that just came out. It's perfect for fall."

Just because the model doesn't have her own lip kit empire doesn't mean she's a stranger to makeup. If you follow the 19-year-old on Snapchat and Instagram, you know she's total beauty #goals. But for her, it all starts with skincare, and if she were to get into the business, that's where she'd start.

"I would love to do beauty in the future, potentially skincare — that's more so what I'm focused on," says Woods. "I'm also very into eyebrows. So maybe sometime in the future, I'll work on something in skincare and eyebrows."

For now, Woods is focusing on fashion and modeling, namely her campaign with plus size retailer Addition Elle. Woods had the chance to meet Ashley Graham through it and told me what she learned from the curvy supermodel. "She's a hard worker and she knows what she's doing and knows what she wants. I tend to get indecisive sometimes, so just being around someone who is very attentive was great, and I learned a lot from her."

The NOLA By Addition Elle collection is made up of stylish, yet functional athleisure pieces that will comfortably take you from the gym to brunch with the girls. At Cycle House LA, Woods was wearing a padded sports bra with a white trim and high-waisted leggings. Not only are the pieces great for working out, but they're also perfect for those leisurely days when jeans just won't do. "It's the perfect go-to lazy outfit because it feels lazy, but doesn't look lazy."

To shop Woods' picks and the rest of the NOLA by Addition Elle collection, click here.

More like this
These Are Kylie Jenner's Best Paris Fashion Week Looks... So Far
By Dominique Norman
Everything You Need To Know About Ephemeral Tattoos
By El Hunt
How To Get Your Hands On The Pat McGrath X Supreme Nail Kit
By Justine Knight
The Velvet Nail Trend Brings Cozy Texture To Your Manis
By Jordan Murray
Get Even More From Bustle — Sign Up For The Newsletter