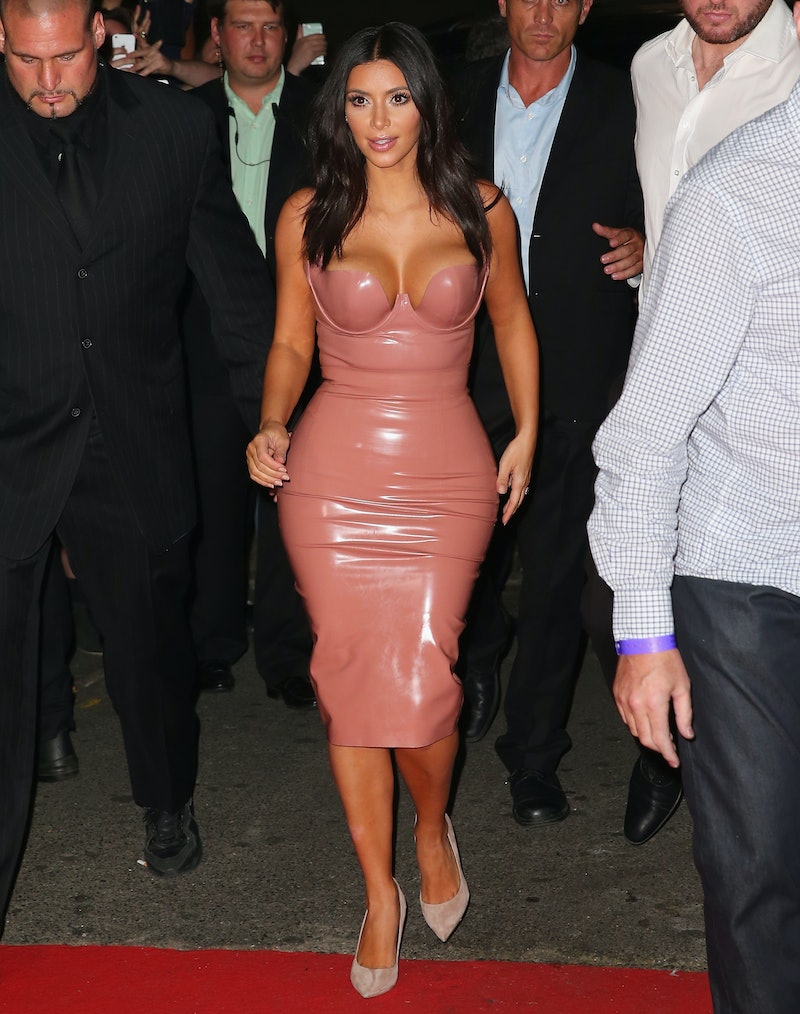 On red carpets and in stores alike, materials like PVC and occasionally latex are being seen more and more. Chokers with rings, bondage-themed straps, and all-leather-everything aren't just for couture anymore, let alone for underground sex clubs. Even everyone's favorite fashion-forward family, The Kardashians, has been spotted wearing high-end latex designs at events and on their Snapchat stories.

The fascination with fetish-wear doesn't just stop with our club clothing, either. Subtly, it has found its way into our day-to-day wardrobes.

Swimsuits with millions of meaningless straps can easily be perceived as inspired by bondage harness-wear, for example. Even more overtly, we're seeing fashion harnesses and body necklaces sold both as underwear and outerwear. The similarities between Ashley Graham's swimsuitsforall "Liaison" suit and a "super revealing slave harness" are also more common than the differences.

But what is it about these designs, whether inspired by or directly taken from fetish-wear, that appeals to us so much? Were these concepts — picked up by fashion designers and trickled down from celebrities to the high street — always stylish, or is it their origins that make them so alluring?

“Basically, the mainstream has always been, and will always be, interested in things that are on its own edges," she commented. "What’s interesting is the way the edges constantly change. The most recent example is Fifty Shades Of Grey, but there was Gaultier dressing Madonna in fetish gear in the ’80s and ’90s and motorcycle culture in the ’50s. The mainstream keeps rediscovering kink as being that edge.”

With the ebb and flow of the popularity of BDSM, bondage, latex, and leather, I'm sure that we have more than a few years left of exploring harnesses and kink inside and outside of the bedroom before high and fast fashion brands see the need to move on. Personally, I hope the taboos get pushed further by the industry and eventually the mainstream. By experimenting with subcultures like these, the public can hopefully learn to respect and understand them even more — and subsequently, learn to respect and understand the people whose sexualities are unlike their own. Even if that respect has to start with a new leather corset or a necklace.

More like this
Why Acts Of Service & Gift Love Languages Are A Dream Pairing
By Lexi Inks
Breeding Kinks Have Been On The Rise Since Roe V. Wade Got Overturned
By Lexi Inks
Are Quality Time & Gift-Receiving Love Languages Compatible?
By Lexi Inks
The Differences Between Polyamory & Open Relationships
By Lexi Inks
Get Even More From Bustle — Sign Up For The Newsletter