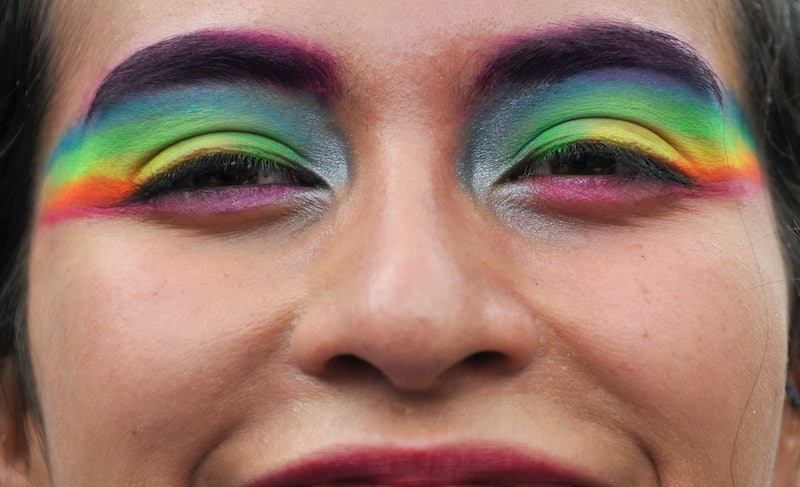 Within the LGBTQ community, there's a lot of discussion about what exactly the acronym and its variations mean and why we use them. But while many people both outside and within the LGBTQ community are familiar with the terms lesbian, gay, bisexual, and transgender, fewer people are familiar with what the term "queer" means. As is the case with many identifying labels, being queer can mean different things to different people; for example, when I refer to "being queer" myself, I am referring to being part of the greater LGBTQ community — that is, I personally identify as a lesbian, but I also identify with the community as a whole. On the flip side, however, there are many people in the LGBTQ community who choose to use the word "queer" over established labels or emerging ones like pansexual, demisexual, or others. Still, others do not use "queer" for themselves at all. With all of this in mind, it's clear that there's a lot to unpack in those five letters.

"Simply, 'queer' signifies that someone is not straight and/or not cisgender," Lauren Canonico, a New York City-based, LGBTQ+ affirming psychotherapist, tells Bustle. "Queer allows you to connect with the LGBTQ community without having to 'pick a box.' Queer encourages respect of the fluidity of sexuality and gender, allows room for evolution and growth, and acknowledges that attraction — both romantic and sexual — exists both in and outside of those labels."

As Satori Madrone, a sexuality, gender, and relationship therapist and educator, tells Bustle, some people experience "multiple ways of being queer, including sexual, gender, or relationship fluidity," instead of identifying with just one dimension of the LGBTQ experience. "Therefore, claiming a “queer” identity allows for an unlimited, personalized and unfolding experience of being, feeling, and expressing queerness," Madrone says.

Just as being queer can mean different things to different people, folks have all sorts of ways of expressing their queerness, too. The choice to be "out" as queer can depend on a lot of factors, from personal preference to safety. At the end of the day, though, there is no right or wrong way to be queer, and it's OK to identify with queerness on your own terms, even if it doesn't look or feel the same as someone else's definition.

Here are five important things to know about the Q in LGBTQ.

If you identify as queer, this doesn't suddenly change or shift based on who you date. "There are many people who mistakenly think that identity is contingent on your current relationship, and it absolutely isn’t," Canonico says. "Identity tends to be more stable, but the expression of it in terms of who you are romantically or sexually attracted to, who you date, who you have sex with, etc., can be very fluid and doesn’t change your underlying identity."

Whether someone is in a same-sex relationship, a different gender one, or another arrangement, and no matter what their gender identity might be, their identity is their identity.

"Some queer individuals may also experience internalized oppression if they believe that queerness is limited to those who experience same-sex or same-gender attraction," Madrone adds. "Being queer does not mean that someone cannot be involved in a heterosexual relationship" or be attracted to people of a different gender.

It's not for anyone else to decide whether someone is "queer enough."

Queerness Can Encompass Both Sexuality And Gender Identity

Just as "queer" can mean different things to different people, so too can identifying as genderqueer. Being genderqueer isn't limited to what you look like, or how you physically present.

"Rather than allowing for only two seemingly opposite — or binary — genders of men and women, or two sexes of male and female, queerness expands the possibilities for multiple genders, sexes, sexualities, expressions, identities — and beyond," Madrone says. "This means you can have a queer sexual orientation, gender identity, gender or sexual expression, romantic orientation, and more."

"Queer" Is Still Considered Offensive By Some

As empowering as queer's meaning is today, it has a dark history. Throughout the 20th century, "queer" was often used as a slur for LGBTQ people. Around the HIV/AIDs crisis, some LGBT people slowly began reclaiming the word "queer," hence its addition to the acronym; still, even within the community, there are mixed feelings about the word, and a lot of people strongly oppose it.

"Members of the LGBTQ [community] who have been directly impacted by the slur 'queer' may not always embrace its reclamation due to its associations with experienced trauma and pain," Madrone says.

Just as it's not OK to call someone who identifies as pansexual bisexual, or tell a demisexual woman that she's now a lesbian because she's dating another woman, it's not cool to label someone's sexuality — period. Because of the history of the word queer, it's especially important to double-check if someone uses this term before you introduce them around your LGBTQ friend groups.

Being Queer Doesn't Have Any One Look

As I previously noted, many people proudly identify as queer. And while queer's meaning, at its core, is to bend or twist the norm, there's no one "queer" look, and your identity is valid no matter your haircut or outfit.

"One common misconception about being queer is that queerness is something visible, or that having an unconventional look or style is an indicator of being queer," Madrone says. "While some queer-identified people may express themselves by wearing non-normative fashion, hairstyles, and so on, it is impossible to distinguish who is queer and who isn’t based on a distinct way of acting, dressing, talking, behaving, and so on."

Being queer is an identity — not a fashion statement.

There's A Reason 'Q' Is Part Of LGBTQ

While a lot of people joke that the LGBTQ acronym can turn into "alphabet soup" because of the growing amount of letters, making sure the community is inclusive is really, really important. All people deserve representation and inclusion, and it's important not to prioritize some voices over others. Many people feel that "queer" and "the queer community" covers a wide base of people who may not be represented by L, G, B, or T.

"Queer has come to be an umbrella term for LGBTQ+ folks all across the spectrum of gender and sexual minorities," Canonico tells Bustle. Asexuality, non-binary identities, being intersex, demisexuality, and more all have a place within the LGBTQ community, and "queer" can be a way to speak to all these identities without leaving anyone off of the acronym.

So, there you have it! When it comes down to it, using or not using the word "queer" is an extremely personal choice; the important thing is to let people identify themselves, no matter what that identity might be.

More like this
Gen Z Are Twice As Likely To Identify As Queer, According To New Data
By Sam Ramsden
What The UK Blocking Scotland’s Gender Recognition Bill Means
By Sam Ramsden
The UK Government Is *Finally* Banning Conversion Therapy
By Sophie McEvoy
These Artists Are Reimagining Black History Month To Create A Better Future
By Katie Mitchell
Get Even More From Bustle — Sign Up For The Newsletter
From hair trends to relationship advice, our daily newsletter has everything you need to sound like a person who’s on TikTok, even if you aren’t.

This article was originally published on July 28, 2016