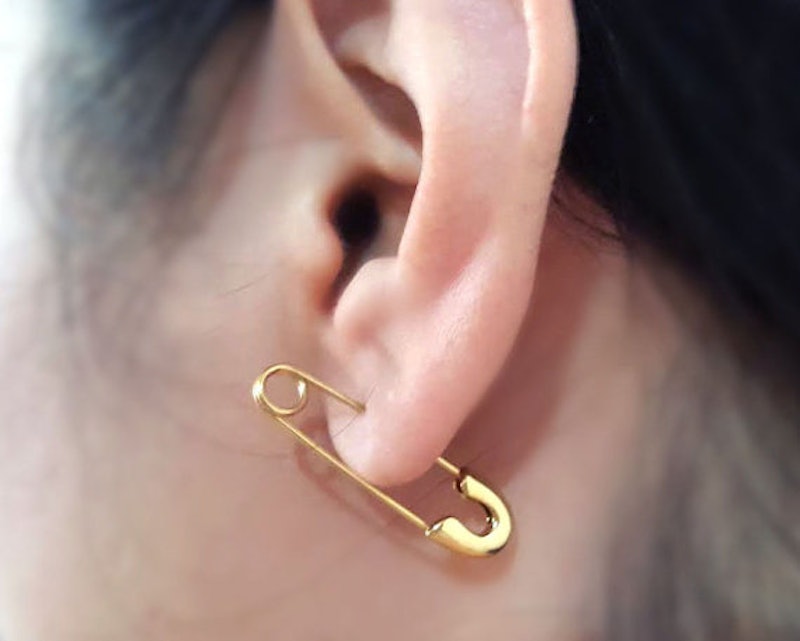 During the early millennium, you may have been a teeny-bopping tween, an angst-ridden emo kid, or an aspiring Regina George. But no matter which subculture you belonged to, most Millennials had one thing in common: Jewelry your parents wouldn’t let you wear in the early 2000s. It didn’t matter how cool or strict your 'rents were. There were just some accessories that went under the blanket rule of “things you shouldn’t let your kids wear.” Period.

In the early ‘00s, there were many fashion trends that your parents likely weren’t keen on. From tees with questionable slogans on them, to kitten heels, to low-rise jeans, early millennium fashion was a minefield in which we waged war against our parents. We'd even haggle at times. Like, "No mom, I won't wear those track pants with writing across the butt out of the house, if you'll let me wear a halter-neck prom dress."

Lucky for us, jewelry was relatively easy to hide and we could pop many pieces in our pockets to dig out later, when we were away from the beady eyes of our parents. But there were still times when our folks would inevitably catch us red-handed and we'd likely be grounded. So here’s a selection of jewelry your parents wouldn’t let you wear in the early ‘00s, no matter how much you begged.

Your parents were not daft: They knew the real reason adolescents wore those colorful rubber bracelets and they weren't about to let their kid become part of any of that, thank you very much.

Although you probably liked Playboy merchandise because your favorite celebs wore it and the bunny symbol was really cute, your parents took one look at that emblem and cringed. There was no chance they'd let their darling daughter wear anything with the Playboy bunny on it.

When the emo scene exploded into pop culture in the early '00s, your parents probably heard all of the tales about the cult of "emo" and may have tried encouraging you to wear other styles of clothing. When it came to sweatbands (usually worn on the wrist) your folks didn't really understand them. They thought these things made you look like you were ready to play tennis 24/7.

Sometimes they'd turn a blind eye to your sweatbands, but if you hadn't washed them for a while and you were attending a fancy family dinner, they'd definitely make you remove 'em.

After watching you get your craft on, your parents were likely intrigued as to what you'd been making. However, when they spotted your finished beaded bracelet that said, "Good eye sniper," "I'm not OK," or "You'll be sorry when I'm gone," they may have found a way for it to accidentally-on-purpose end up in the trash.

Sure, your parents knew these bracelets were fake, but they were worried about what nosy Sandra across the road would think when she spotted you wearing (what appeared to be) sharp metal around your wrists.

You thought these were super cute, whereas your parents thought they were morbid and creepy. They wouldn't allow you to wear these very often.

Although these were more popular among boys your age, you might have had some dog tags, too. When your parents spotted them hanging around your neck, they had to hold their tongues even though they really felt like shrieking at you to remove them immediately. Your folks understood the symbolic weight dog tags held, whereas your former teen self thought they made you look like a badass.

Your granny had already bought into the horror stories of the emo subculture and was worried for your wellbeing. So there was no way your mom was going to let you visit nana wearing fake razor blade embellishments, unless mama fancied an ear-bashing over the phone post-visit.

Your parents didn't care how awesome you thought you looked while wearing earrings that resembled safety pins. The truly hardcore cool kids would wear literal safety pins through their ear lobes, so you couldn't fathom why your parents wouldn't let you wear fake ones. Life was so unfair.

When you saw Elle Woods rocking a Tiffany's necklace in Legally Blonde , you just had to have one, too — you especially loved the scene in which she wore it during her video application to Harvard Law School.

Your parents might have bought you a Tiffany's necklace for your 13th birthday or Sweet 16, but they were a little picky about where and when you wore it. Places they didn't like you to rock it included concerts, in the shower, camping, to the mall, at the movies, house parties, or sleepovers. Places they did let you wear it included your dad's 40th birthday at the most expensive restaurant in town.

Now you're an adult and you can wear whatever you want. So if you fancy being a real brat, you could sport all of these items at once, pay your parents a visit, and annoy the hell out of them. Because that's what kids are for, right?

More like this
Netflix Reveals First Look At Wednesday In The 'Addams Family' Spinoff Series
By Bustle Editors
Kenan & Kel Just Reunited At The 2022 Emmys & Twitter Is Overjoyed
By Grace Wehniainen
15 Offensive AF Jokes In 'Friends' That Really Aren't OK
By Tolly Wright, Bustle Editors and Meguire Hennes
Tilda Swinton’s Neon Yellow Hair Is More Than A Style Statement
By Justine Knight
Get Even More From Bustle — Sign Up For The Newsletter