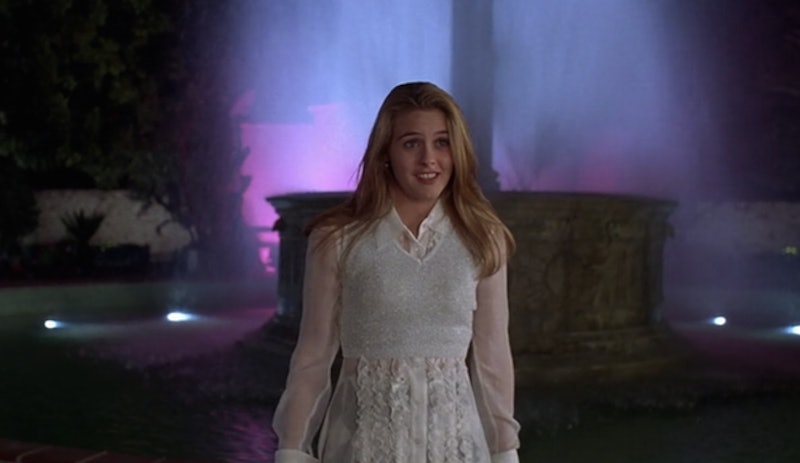 I always try my hardest not to be a total fan girl while gushing over Cher Horowtiz's iconic style. But it's hard not to when a fashionista like her put me in a trance every time she appeared onscreen. Thanks to her spot-on sartorial sense and daddy's credit card, of course, Cher Horowitz's wardrobe was ultimate fashion goals.

You'd have to be totally buggin' to think Cher didn't slay everything she wore. All the plaid, those knee-high socks, the mini skirts: Everything was too fab for words. She made most of us look like "fashion victims" in comparison — or "ensemble-y challenged," whichever you prefer. Even if I knew I would never have a revolving closet or virtual outfit selector of my own, Cher's wardrobe still gave me major inspo. A girl could certainly dream of owning a smoking hot Alaïa or a Calvin Klein dress to send the parents into shock.

I don't even know why we so often try ranking Cher Horowitz's outfits when all of her looks were so bomb. Considering many of us are still imitating the film's signature looks today, it's clear that we have learned some major style lessons from Clueless. Although Cher was always dressed to the nines, there were 15 times she really proved that her wardrobe was goals AF. Let's celebrate them now.

1. When she helped the newly made-over Tai make her debut

Cher and her girls looked liked they belonged on a magazine cover when walking into school in these ensembles. The plaid, knee-highs, and collared shirts screamed "school-girl chic" and I'm living for these rich fall hues.

Cher's skirt was the real star of the show, though. With denim button-front skirts being so popular in the '90s, her burgundy mini was a breath of fresh air. The matching over-the-knee socks were also the perfect touch to make this an outfit we drooled over.

2. When she couldn't believe Tai was becoming a queen bee

Cher wasn't just a fan of fuzzy pens. When she wore a pastel cardigan with the same fuzz as a trim, my heart nearly skipped a beat. Sleeves like those combined with a multicolored, gingham skirt gave this outfit equal parts prep and glam appeal.

3. When she went on a shopping spree

I think a "Z" snap is in order here because Cher looked like she meant business in this getup. She was dressed as though she could take over a boardroom, and look damn good while doing it. I always thought argyle belonged on golf sweaters, and golf sweaters alone — until Cher made the pattern look über trendy. This was definitely her most professional look yet.

4. When she had Christian over for a movie night

Red was Cher's color, for sure. She looked effortlessly flawless in this LRD. When she opened her door to reveal this red hot number, I definitely wanted to be her.

5. When she and Dionne concocted a plan to get on Mr. Hall's good side

Cher was the queen of plaid, and it made her wardrobe ultimate '90s goals. The fur trim on this jacket gave the piece some flare and made it a head-turner.

6. When her dad nearly had a conniption over her Calvin Klein

Cher traded her plaid in for the night and it was definitely worth it. Her dad may not have been too fond of the outfit, but it certainly gave me the feels. With this body-hugging dress, Cher showed us that sometimes simplicity is key.

7. When she came to the conclusion that she was "totally clueless"

This is one of my absolute favorite looks from the film. Cher layered sheer shirts over several of her looks throughout the movie. But when she wore this sleeveless, cropped jumper over a sheer, tuxedo shirt I fell in love.

It was an unlikely combo that looked feminine and sophisticated. Plus, she brought the argyle skirt back. It was her most "capable-looking" outfit, after all, even if she did fail her driver's test when rocking it.

8. When she attended a party in the Valley

If this diva-approved outfit doesn't do it for you, then you clearly don't understand that she's wearing an Alaïa. Honestly, that jacket made the ensemble. It may have been a little over the top for a high school party, but pieces like these are what made me lust over Cher's stunning wardrobe.

9. When she and Josh engaged in witty sibling banter

There's no denying that Cher had a thing for sheer shirts. And she was back at it again with the fuzzy trim sleeves on this one. Breaking away from her super preppy norms, this was one of Cher's edgier ensembles and it really spoke to me.

10. When the entire student body gave her a round of applause

Plaid and over-the-knee socks just don't get old. Cher's mini backpack and beret were also pure perfection. How did she do it?

11. When she went on a shopping date with Christian

Cher's outfits could get a little elaborate, so this was a simple look for her — one that most of us could easily imitate. The majority of her outfits had a sultry nature to them, but this dress gave her an innocent, girl-next-door aesthetic.

12. When she and Dionne first stole our hearts

Cher had us all rocking plaid on plaid because she slayed so hard in this outfit. You didn't do this look justice if you never told someone off with a shady "as if" while wearing it.

13. When she worked out her buns of steel

When you're Cher Horowitz, even your workout clothes have to be on point. A plain leotard simply wouldn't do for this Beverly Hills fashionista. There was so much to envy about this gingham, corset-back leo. Leave it to Cher to make workout gear runway-ready.

14. When she woke up flawless

Even Cher's pajamas were goals. It just isn't fair for someone to wake up looking this rad.

15. When she revealed the closet of our dreams

Not only did Cher have the trendiest wardrobe money could buy, but she had rotating racks to store all of her impeccable fashions in. If that isn't every fashion lover's dream, then I don't know what is.

I'd argue that much of '90s fashion would have been non-existent without Cher Horowitz's influence. The fact that her style is just as envied and replicated today as it was 20+ years ago proves that her wardrobe was the stuff dreams are made of.