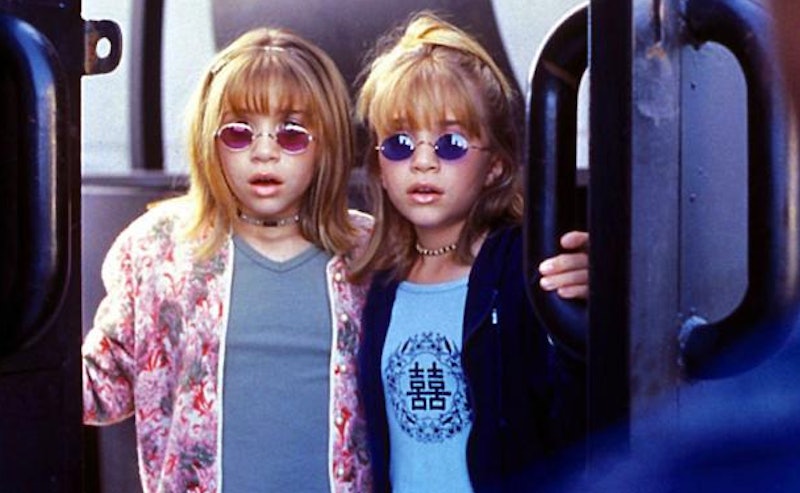 I know very little about the TV shows kids watch today, but I'm certain that their favorite child stars have nothing on the teens who took over television in the '90s. We had more fashionable '90s child stars around than we knew what to do with. Yep, the decade was crawling with budding young actors who taught us everything from how to win over our crushes to surviving first day of school ensembles.

We Millennials love to travel down memory lane quite often, revisiting old, forgotten episodes of shows that make us nostalgic about our childhoods. Naturally, binge watching seasons of Saved By The Bell and Clarissa Explains It All can drum up tons of questions about the stars who used to play our all-time favorite characters. I think we've all experienced going on Google search rampages to uncover the whereabouts of obscure '90s celebrities we forgot we adored. But what we arguably don't do enough is check out the fashion-forward '90s child stars who are still teaching us a thing or two about style.

So let's take a moment to remedy that, shall we? Below are 11 child and teen actors from the '90s who educated us on all things sartorial, alongside where they are today.

Older Millennials likely remember Theissen best for her role as Kelly Kapowski, the upbeat, co-ord-wearing, Bayside cheerleader on Saved By The Bell. She may have been the most popular girl in school, but she wasn't the spoiled, mean type we're so used to seeing as head cheerleader. That's what made Kelly so lovable. Well, that and her endless supply of neon mini skirts.

Today, the mother of two is a celebrity chef. The former child actor stars as the host of her own show on The Cooking Channel, Dinner At Tiffani's, where she prepares meals with celebrity friends. We may not see her reprise the role of Kelly Kapowski anytime soon, but reunions with her former cast-mates give us hope. We finally saw Bayside lovebirds Zack and Kelly reunite when Mark-Paul Gosselaar appeared on an episode with Theissen in May 2016. For any Saved By The Bell fan, it was a dream come true.

Had it not been for Bialik's role as the title character in Blossom, funky hats and sundresses probably wouldn't have ever graced our bodies. Blossom Russo had so many major '90s fashion moments that we could hardly keep up with her impeccable style.

Today, Bialik has shunned her flower hats to play Dr. Amy Farrah Fowler on the The Big Bang Theory. As a quirky neuroscientist, Bialik's wardrobe isn't all the rage. But she still has a major presence in the acting world. Her role as Dr. Fowler has earned her four Emmy nominations.

Cameron Candace Bure was definitely my favorite sister on Full House. As the eldest, she just seemed so much cooler. Plus, she grew into a '90s style icon before her sisters came into their own. Additionally, she and her BFF Kimmy Gibbler showed us what true friendship was all about.

I died and came back to life all over again when I heard the news that the cast of Full House would reunite for a new series. Reprising her role as the eldest Tanner on Fuller House, Bure has kept our love affair with DJ Tanner going strong. The spunky, teenage DJ we once knew is now a mom of three, living with her sister and BFF in the spinoff series Fuller House. Lucky for us, Fuller House has been renewed for a second season, so it looks like we'll get to enjoy adult DJ for a little longer.

Screech could never catch a break on SBTB with Lisa Turtle around. Played by Lark Voorhies, Lisa was the fashion expert and gossip queen of Bayside. With her on-point wardrobe, this trendy fast-talker always gave us a reason to want to be her.

Don't let Zack and Kelly's reunion get your hopes up regarding seeing the fashionable Lisa Turtle again. Voorhies has done a little acting here and there throughout the years, but for the most part, she remains out of the spotlight.

Even when her cast-mates got together on The Tonight Show in 2015 for a Jimmy Fallon Saved By The Bell reunion sketch, Voorhies was nowhere to be found. She did make headlines in 2012, however, when her mother told People Magazine that Voorhies was battling bipolar disorder. The actor denied the claims.

Personally, I'm still holding on hope to see my beloved Lisa Turtle on the screen again.

We were first introduced to the Olsen twins when they shared the role of Michelle Tanner on Full House in the late '80s and early '90s. They grew right before our eyes, crawling on the show until later transforming into the sassy little sister who gave DJ and Steph a run for their money. The twins also solidified their place as tween style icons in the later '90s and early 2000s when they starred in their own direct-to-VHS films.

Although many of us got our wish when Full House rose from the dead to come back as Fuller House, we have yet to see Michelle Tanner. The Olsen sisters are the only members of the original cast who did not sign on to star on the spinoff. But I say we give them a pass, considering they're busy building a fashion empire. The stylish duo has received the CFDA Womenswear Designer Of The Year award twice: Once in 2012, and again in 2015.

Brandy was not only a teenage singing sensation, but the star of her own show in the late '90s. We watched Moesha juggle everything from boys to school to her father's strict rules. The teenager may have frequently struggled in her home and academic life, but she never suffered in the fashion department. We have trendsetters like Moesha to thank for keeping braided styles alive back in the day.

Brandy is still just as involved in music and acting as she was 20 years ago. The singer recently starred in BET's The Game beginning in 2012 until the show's end in 2015. Her stint with BET didn't stop there, though, as the network named her the leading character in Zoe Ever After, a sitcom about a divorcee turned cosmetics company founder that premiered in Jan. 2016.

Brandy is also expected to release her seventh album later this year and is currently performing in her Slayana World Tour, which began in New Zealand in 2016.

Melissa Joan Hart was, without a doubt, one of the teen queens of the '90s. She ruled the decade as the title characters in Nickelodeon's Clarissa Explains It All and ABC's Sabrina The Teenage Witch. Both series gained Hart a place in our hearts as a '90s fashionista we were proud to imitate — tie-dye and all.

Hart is still making a splash on television today. Not only was she the star of ABC Family's Melissa & Joey , but she served as an executive producer and director on the show, too. Talk about being your own boss.

Will Smith may have been known for his hip and flashy fashions on The Fresh Prince Of Bel-Air, but he wasn't the only one with trendsetting style. Tatyana Ali, the actor playing Will's little cousin Ashley Banks, proved just how major mixed prints can be. When Ashely blossomed into a drop-dead-gorgeous teenager, she gave us plenty of reasons to envy her trendy, mod-infused style.

It's hard to believe Ashely is all grown up. Tatyana Ali is still involved with acting today, but she's been making headlines this year as a proud mommy-to-be. Ali got married in Jul. 2016 and is now expecting her first child. I believe a huge congratulations is in order.

Most Millennials know Danielle Fishel as one third of the dynamic trio that was Cory, Shawn, and Topanga on Boy Meets World. I couldn't help but think Cory and Topanga were ultimate #CoupleGoals, and I'm willing to bet that most of us still dream of cultivating a bond like the one they shared. With her full, luscious locks, Topanga also gave us major hair envy.

First Full House and then Boy Meets World? How did GenY-ers get lucky enough to have two of our favorite '90s sitcoms revived? Today, Fischel is keeping her character Topanga alive, but this time as an adult on The Disney Channel's Boy Meets World spinoff, Girl Meets World.

Yes, Cory and Topanga are still together; and yes, they have children. Someone pinch me, because I must be dreaming.

Most of us couldn't help but love Jodie Sweetin's character Stephanie Tanner on Full House. Everything from her "how rude" punchline to her totally on-point teenage grunge aesthetic made us fall for her character. Considering how much as Stephanie made her presence known in the Tanner household, she was far from suffering from middle child syndrome.

Thank you, thank you, Netflix. Without you, we would not have been reintroduced to the fiery Stephanie Tanner. Alongside Candace Cameron Bure and Andrea Barber, Sweetin plays the fun live-wire on Fuller House. Fingers crossed that the Netflix series continues to be renewed for years to come so that we can enjoy Sweetin's acting for a little longer.

Mary-Kate and Ashley weren't the only twins giving us life back in the '90s. Tia and Tamera Mowry were another pair of identical sisters we loved. We watched them play twins separated at birth and brought together again by fate on their own show Sister, Sister. The sitcom showed us a ton of trendsetting style. With twins, that meant double the fashion inspo.

The twins are just as amazing as they were as teens, TBH. Tamera currently stars as co-host on The Real talk show and Tia has a recurring role on Fox's Rosewood.

Our formative years would not have been the same without actors like these to guide us though school, relationships, and fashion. It's refreshing to see so many of our favorite '90s child and teen stars doing so well today. And to the ones keeping the memory of their past television characters alive in reprised roles? I cannot thank you enough for such a gift.

More like this
Netflix Reveals First Look At Wednesday In The 'Addams Family' Spinoff Series
By Bustle Editors
A New 'And Just Like That' Table Read Pic Confirms A Key Character's Return
By Jack Irvin and Grace Wehniainen
The Chicest ’90s Updo Hairstyles To Try
By Paris Giles
24 Years Ago, 'Friends' Dropped Its Most Underrated Ross & Rachel Episode
By Grace Wehniainen
Get Even More From Bustle — Sign Up For The Newsletter