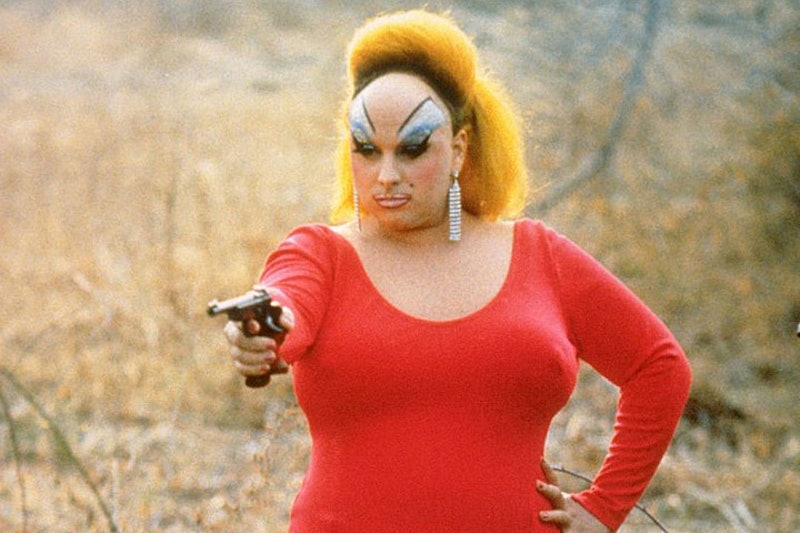 There’s no disputing that Divine's outfits and general aura made her the queen of drag. The John Waters muse threw more original looks — both on and off screen — than most of us can even dream of achieving. A pioneer in terms of bringing drag into the mainstream consciousness from the ‘70s and onwards, Divine not only broke through multiple taboos regarding how we view gender as a society, but shattered several rules in terms of acceptable style and conventional beauty standards along the way.

For Divine, subverting ideas of beauty through performance was undoubtedly more important than being beautiful herself. As friend and collaborator Waters put it to Baltimore Magazine, “His legacy was that he made all drag queens cool. They were square then, they wanted to be Miss America and be their mothers. Divine frightened drag queens because he would show up with a chainsaw and [makeup artist] Van Smith would put fake scars on his face, wearing miniskirts when you’re 300 pounds. He broke every rule. And now every drag queen, every one that’s successful today, is cutting edge.”

Whether dressing as a lobster onstage or digesting dog poop, Divine’s legacy isn’t restricted to influencing the next generation of RuPaul’s Drag Race contestants. With looks that broke barriers for plus size women, in particular, there are many Divine outfits to draw inspiration from for our own everyday wardrobes. Below are 11 of the best.

Appearing as a tangerine dream, Divine disproved the theory that plus size women can't wear underwear as outwear.

One of her most iconic looks, this skintight red dress complete with a tulle fishtail finish and the mustard-yellow backcombed beehive isn't worlds away from my own Friday night aesthetic.

A notably understated outfit for the usually outrageous queen, this sickly sweet '50s style wiggle dress would still be totally wearable in 2016.

Serving sassy disco realness — even with prosthetic scars on her face and a blow-dry past its sell-by date — Divine dazzled in metallic leopard.

Polyester may have seen Divine take on the less-than-glam role of a housewife pushed to her very limits, but despite her mascara not being tear-proof, that scarlet pout remains very much on point.

Perfect for rainy summer evenings or bad hair days, I'd never expect to find myself lusting after a hooded tank top. Yet here I am, frantically Googling 21st century ways to recreate this Divine look.

This hip-hugging halter dress may be one of Divine's more casual getups ever, but the candy shop-esque, shiny satin is pastel perfection in my eyes.

Another perfect deterrent to the summer heat, why not take a leaf out of Divine's book and match your handheld fan to your look for head to toe coordination?

Channelling a high society diva, Divine was known to be more than generous when it came to spending her hard-earned cash. But what better way to accessorize a one-shoulder zebra print number than with hoards of designer shopping bags?

If looks could kill, Divine's always-on-point red pout paired with eyebrows sharper than knives would be enough to take down any enemy.

The higher the hair, the closer to god, right? While I'm not sure that Divine will be repenting any sins, this pea-green babydoll dream and sky-high hairline are still the stuff dreams are made of.

With a documentary entitled I Am Divine — set to explore this queen's life — coming to our (laptop) screens via Netflix soon, and the popularity of drag ever-increasing, there's never been a better time to delve into our wardrobes and steal some inspo from the performer's iconic back-catalogue.