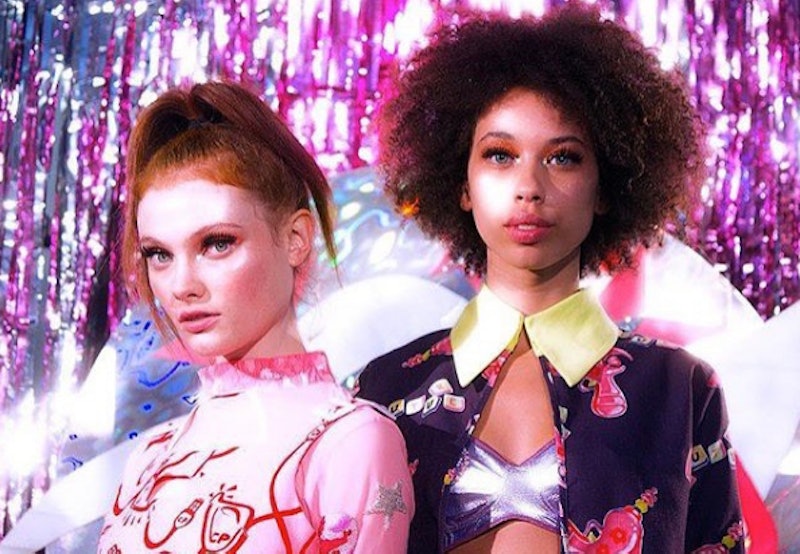 I first came across fashion designer Clio Peppiatt's glittering, colorful creations on Instagram. As much as I loved the gorgeous faux fur and playful coordinating sets, it was her approach to representing all types of women that kept me scrolling through.

A self-identified feminist designer, the 24-year-old established her namesake label in 2014 after graduating with a degree in Fashion Print from London University Ravensbourne. Two years down the line, Peppiatt has garnered a huge following of supporters online — including celebrity fans such as Lena Dunham and Kylie Jenner — all of whom are seemingly obsessed with her tongue-in-cheek sense of humor and fearless representation of unashamed femininity.

If one thing’s for sure, it’s that it's not easy starting your own business in your early 20s, let alone thriving in a creative capital city such as London. Nonetheless, Peppiatt felt it was important to do things on her own, as opposed to working for another brand. “I did a lot of interning, freelancing, and working for other brands while I was studying, ranging from very established luxury houses to high street suppliers," she tells me in an email interview. "I wanted to learn as much as I could about the industry as a whole. [But] while I learned a lot, I still hadn’t found somewhere that I really wanted to continue at full time.”

Although Peppiatt is thankful to her experiences as an intern for teaching her noteworthy skills of both the practical and professional variety, she couldn’t help but start some side hustling while working at a high street supplier — starting with making garments for friends and family and eventually launching her full time business.

Peppiatt explains, “I love the idea of having the complete creative control and freedom, plus being able to focus on aspects and issues that are really important to me through the brand. It’s been very tough at times, but those reasons are still very attractive for me.”

Despite only showing at London Fashion Week for two seasons thus far, Peppiatt is more than experienced in building a fantasy world around her clothes. Each collection has a clear theme, whether that be Barbarella-esque girls from another planet or winter wonderlands inspired by visual culture such as The Shining and American Horror Story. All concepts aside, the designer credits physical processes such as embellishment, applique, and embroidery as being extremely important to her creative process.

“A lot of the inspiration comes from the craft for me. I’ve always, always loved everything to be very detailed and decorative so it’s always about interpretations of that, whether it be through fabric manipulation, illustration, embellishment,” she tells me. “[Mine is] definitely a very 'more is more' aesthetic, kind of a celebration of all those wonderful crafts that are getting left behind. At the same time, I think there’s always a sense of humor in my work. I’ve always aimed to make clothes that uplift people.”

Unlike the sea of corporations and companies seemingly cashing in on the popularity of gender equality, Peppiatt doesn't seem like yet another designer preaching feminist philosophy, but not necessarily incorporating real, intersectional feminism through all facets of their businesses. Everything from the fact that you can order custom fits of her clothing to her beautiful naked lady drawings featuring women of all sizes and persuasions demonstrates her genuine care for promoting body positivism and diversity.

Even more than visual representation, however, Peppiatt puts her time — and money — where her mouth is. In 2015, the designer co-curated an all-female, one-night-only exhibition, Female Matters, featuring a lineup full of talented artists in a bid to raise money and awareness of female genital mutilation (FGM) charities in the U.K. — helping unite over 50 young creatives all fighting for the cause. Following that, she decided to donate a portion of sales from her Naked Ladies tees to charity — her latest choice being LGBT organization Stonewall.

Not only is Peppiatt mobilized in terms of fighting for what she believes in, but her clientele is as well. She’s dressed some of the most inspiring women around, from Lena Dunham to model and activist Adwoa Aboah, on top of creating costumes for stars such as Charli XCX and Marina And The Diamonds.

So who would her dream Clio Peppiatt girl be? “There are so many fantastic women I’d love to dress. Making clothes for Lena Dunham was particularly exciting for me, I really admire her work. She’s very intelligent, very funny — she has such a huge personality and that’s ultimately what I look for when I’m thinking of people I want,” she says.

For now, Peppiatt is focusing on her next collection — due to drop at London Fashion Week in Sept. 2016 — as well as working on a follow-up to her Female Matters exhibition.

In the meantime, you can find me double-tapping every Insta-pic she posts and lusting after that vegan, faux-fur leather coat making me wish for winter in the heat of summertime.