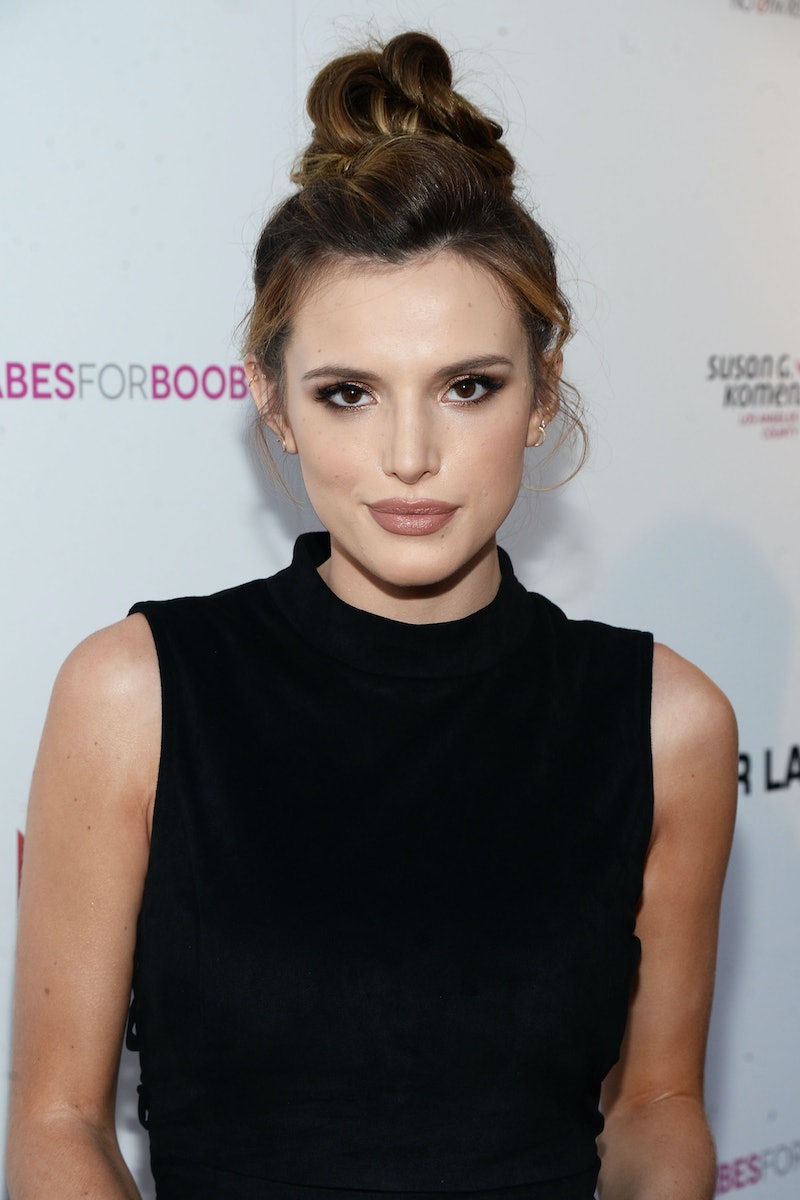 It seems like every week brings a new crazy beauty procedure, but microblading, or the trend of tattooing on your eyebrows, takes the cake for me. Although the process of using semi-permanent makeup is not new, microblading (which is also called eyebrow embroidery), is skyrocketing in popularity. But when I heard a popular actress may have made the microblading leap, I did a double take. Did Bella Thorne really tattoo her eyebrows? It looks like the actress did, and she documented the entire thing on Snapchat.

The social media-savvy star took to Snapchat on Monday to share her latest beauty procedure, and although she didn't out and out say it during her snap story, it was clear from the context that Thorne was tatting on her brows. Microblading is done by using tiny needles to deposit ink close to the surface of the skin in super thin strokes so that it looks as natural as real hair. Thorne, who's a redhead, has pretty light natural brows, so this transformation was definitely striking.

Although I didn't hit up her Snapchat in time to screenshot the actual process, you can check out those photos on People and see her transformed brows in these pics from her Snapchat Wednesday (she unfortunately hasn't Instagrammed a pic of the finished brows yet).

Here's a shot of the brows in action on the set of Thorne's current movie.

And this is what they looked like before with makeup:

It's amazing that she can wake up and have instant brows now!

Yes, there's a tissue in her nose — but how great do Thorne's brows look here? They're so striking but still look really natural. And her brow shape, which is all about the natural, feathered shape, is just becoming more popular.

The feather brow is simply one that's light and natural looking and focuses on on small strokes, according to Bailey. And if the tattoo trend is a little too much for you, there's always another option — an eyebrow pencil. Bailey recommends Benefit's Precisely My Brow.

"The combination of the narrow tip and the perfectly balance formula creates believable hair like strokes with just a flick of the wrist," he says. "Simply start at the base of the brow and make upward flicks throughout the brow towards the hairline. As you move towards the arch, make those flicks towards the temple. Next set the hair with an invisible shaping and setting gel styling it slightly upward."

Sounds pretty simple right? So if you're a needle-phobe like me, you can have brows just like Thorne's, no tattoo required.