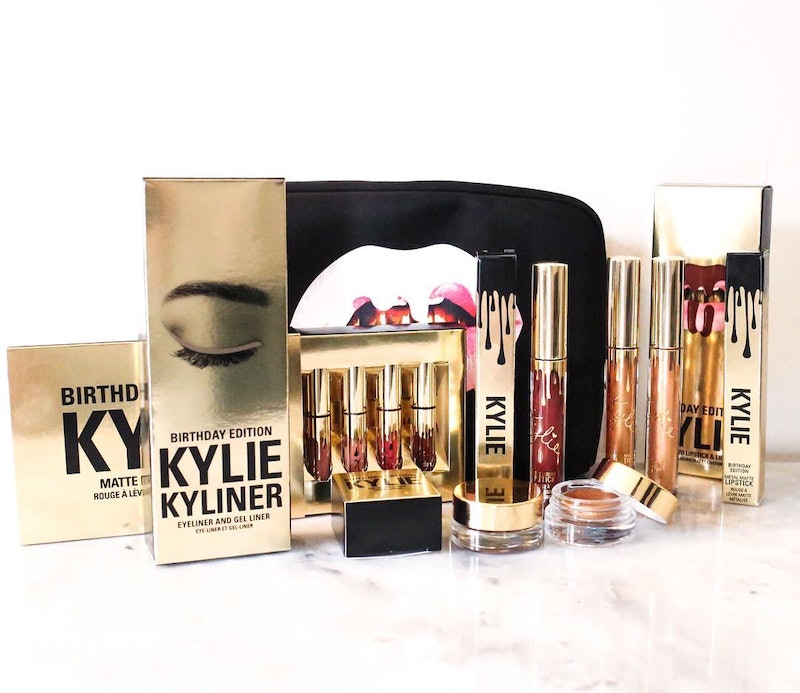 For fans and beauty lovers, the fact that the Kylie Cosmetics eye products sold out first shouldn't come as a surprise. When the KyShadow Bronze Palette debuted, it sold out in sixty seconds. The second time? A minute and a half. Now, during another restock that also featured the Kylie Cosmetics Birthday Collection, both the Kyliner Kit sold out first along with the creme shadows, and it makes total sense. Also selling out first, though? The entire collection. The Birthday Collection bundle was one of the first products to go meaning that while fans are undeniably excited about Kylie Cosmetics' eye products, they're also pretty stoked about the whole collection, too.

According to a video posted to Jenner's Instagram after the sale began, the youngest member of the Kardashian and Jenner clans beat the record for most checkouts per second meaning that if you were one of the lucky ones to snag a Kyliner or cream eyeshadow, you totally scored.

If you were wondering when the next restock will so you can get your hands on the Kylie Cosmetics Birthday Collection, there's been no announcement so far. However, Jenner did say that the products would be available until August 10, so there's still hope. If I had to guess, Jenner's already prepping for that day. So far, she's been pretty consistent with getting fans what they want.

So if you were what was the first Kylie Cosmetics products to sell out, you now know the most popular choices for fans. In essence, come next restock, you'll know what to add to that coveted cart first.