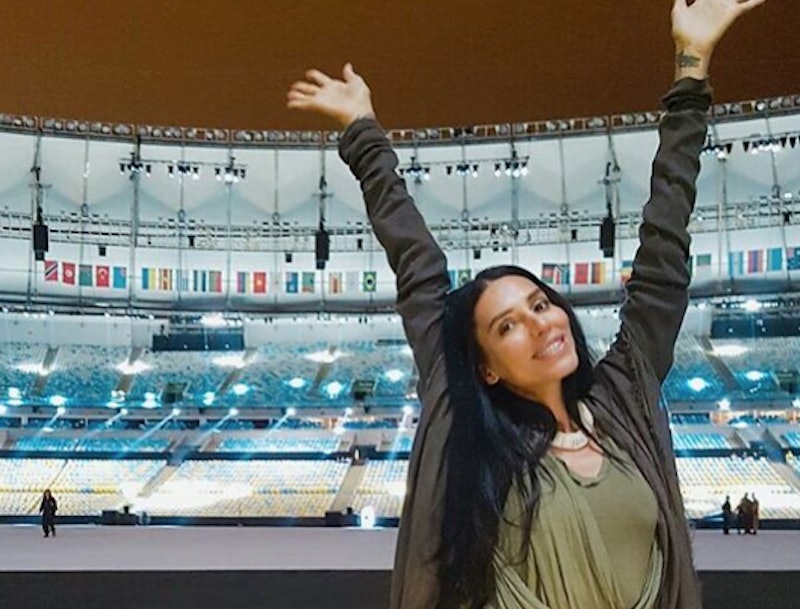 There are tons of athletes and celebrities making an appearance at the 2016 Rio Summer Olympics, but this model moment is major. Lea T, who also goes by Leandra Medeiros Cerezo, will be hosting the opening ceremony in Brazil. Why does this matter? Well, she's the first transgender woman to host in the history of the games, so this is a pretty major moment.

While Lea T isn't the only model to get in on the Olympic fun, she's arguably by far the most legendary. In addition to being an LGBTQIA+ rep at the Games, Lea T is a Brazilian-born, Italian-raised model, who actually lives in a jungle — and her Instagram proves it.

So what is Lea T's role in the opening ceremony exactly? Well, she'll be joining Giselle Bündchen to kick off the big event. According to TeleSur.com, she'll be helping send a meaningful message. "I can’t say anything yet, we need to keep the surprise, but the message is clear ... include everyone, no matter their gender, sexual orientation, race or religion. We are all human beings and we are part of society. My role at the ceremony will help send this message, " Lea T told BBC.

This isn't the only way that the 2016 Rio Summer Olympics are breaking boundaries either. This year's event actually features a record breaking amount of LGBTQIA+ athletes as well. According to OutSports, the number of LGBT athletes is up to 44, which includes three coaches.

From looking at her Instagram, Lea T looks super excited to be back in Brazil and taking part in the opening ceremony. She's been posting pictures at the event, walking the beach, and even climbing trees.

I can't wait to see what role she plays in the big event. The Olympic kickoff starts at 8 p.m. ET on Aug. 5 on NBC, so there's not much longer to wait.

More like this
The 9 Most Head-Turning U.S. Open 2022 Beauty Looks
By Rachel Lapidos
Gisele Bündchen Appears To Address Those Tom Brady Divorce Rumors
By Radhika Menon
Tilda Swinton’s Neon Yellow Hair Is More Than A Style Statement
By Justine Knight
Jack Grealish’s Reaction To England’s New Kit Is The Most British Thing You’ll See Today
By Darshita Goyal
Get Even More From Bustle — Sign Up For The Newsletter