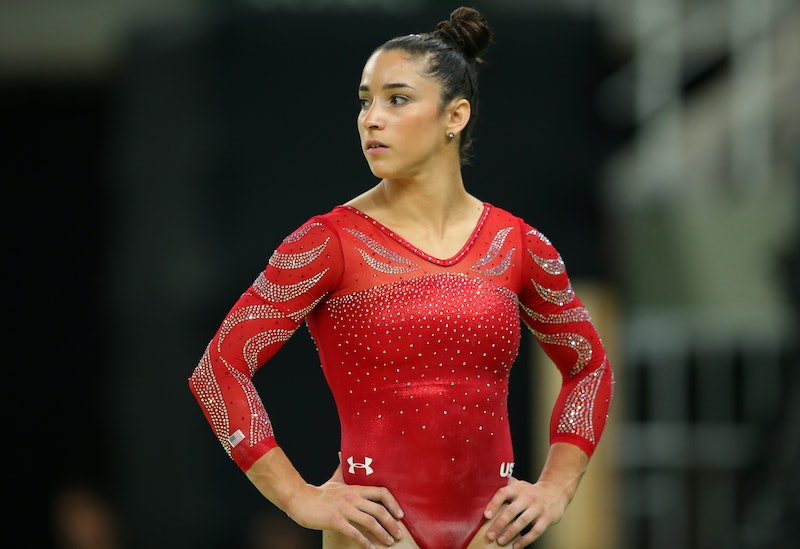 The Olympics are in full swing, and one of the most anticipated sports is definitely gymnastics. From what they wear to which tricks they'll throw, people from all across the globe can't wait to see it all. if you're wondering who made team USA's gymnastic leotards, you might not be surprised by who got the honor. The brand is a familiar to Olympics gear, but this year they're changing things up in a big way.

Gymnastics is one of those sports that combines fashion with athleticism and attracts tons of different viewers. In fact, what they wear is so important that gymnasts are judged on their outfits. In the 2012 Olympics, it was Ralph Lauren who designed the gymnastics outfits. This year there's been a changing of the fashion guards. Under Armour designed the 2016 Rio Olympic outfits, and they made some major changes.

Unfortunately only one of the official designs have been shown so far. According to Style.Mic, the shock value of their outfits is a huge part of their score, so many of their uniforms are being kept a secret. The one that has been shown is pretty extravagant though. NBC Olympics reports that this is the most expensive leotard so far. It has 5,000 Swarovski Crystals on it and each leo would cost someone $1,200 each.

According to Mic, even the warm-up outfits are important in the sport. Under Armour designed them all and seems to be doing a standout job so far.

"One of this biggest learnings from gymnastics is that you win or lose base off of the judges' opinions, which makes the uniforms for gymnastics a big part of the competition (more so than in some other sports)," Adam Clement, Under Armour's senior creative director of team sports, told Mic.

According to the New York Times, these leotards are just as important to these girl as a prom dress is to others. Under Armour also designed the men's team's outfits as well. They're a little less sparkly, but just as fabulous.

If their warm-up outfits are this good, I can't wait to see what the competition ones look like!

More like this
The 8 Best Fitbit Bands For Sensitive Skin
By Lauren Moison
Prefer Alcohol-Free Perfumes? Water-Based Fragrances Are On The Rise
By Audrey Noble
How To Get Your Hands On The Pat McGrath X Supreme Nail Kit
By Justine Knight
12 Absolutely Angelic Cherub Tattoo Designs
By Paris Giles
Get Even More From Bustle — Sign Up For The Newsletter