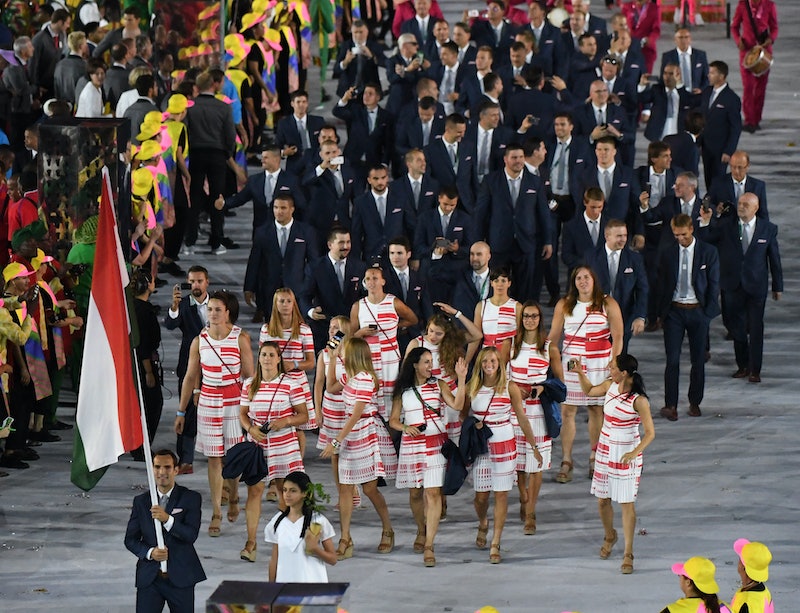 While teams USA, Australia, and Tonga have seen quite a bit of buzz surrounding their Opening Ceremony attire, the must-see Olympic uniform that you probably have yet to catch a glimpse of is Hungary's. That’s right: Hungary’s 2016 Olympics Opening Ceremony uniforms might just be the classiest ones from Aug. 5's festivities. From tailored navy suits and pocket squares for the men to pleated dresses and wedges for the ladies, Hungary was dressed for success at the Olympics Opening Ceremony in Rio.

Sure, Hungary’s outfits might not have been the loudest uniforms (Canada, I’m looking at you), but they were in fact the most polished and wearable of the Opening Ceremony bunch. Although "polished" can often read as "boring," Hungary’s outfits were anything but. From the perfectly-tailored suits with graphic-designed pocket squares to the red and white dresses that looked like they could fit in amongst the pleated creations at Gucci's spring 2016 runway show, the country's team looked fancy, fresh, and fantastic as it arrived to the Olympic games.

According to Daily News Hungary, designer András Tóth of the Hungarian brand USE Unused is responsible for Hungary’s dapper Opening Ceremony attire. Tóth, co-designer of USE Unused, described his Olympic creations to the publication as both trendy and youthful, which is very similar to his brand’s aesthetic.

USE Unused's current collection, available online at UseUnused.com, is a mix of edgy cool separates with a similar vibe to that of the Opening Ceremony costumes. While you wont be able to find the exact suits and dresses that the Hungarian team sported (trust me, I already looked), you will find refined blazers and elegant dresses that are equally stylish.

Although it was initially the polished nature of Hungary's uniforms that caught my eye, the superb styling of the Hungarian Olympic team is what really drew me in. While the men's suits were tailored to perfection, it was the way their pocket squares matched the women's dresses that was an incredibly nice touch. Not to mention that the red soles on the bottom of their shoes were both patriotic as well as a major fashion statements.

And though the women's dresses were stunning on their own, it was the waist-cinching belts and burgundy crossbody bags that really took their outfits to the next level.

If I didn't know any better, I'd think team Hungary was going to a wedding or quite possibly a cocktail party.

Needless to say, if Tóth wasn’t already on your radar, he should be, I mean, just look at those Opening Ceremony dresses.

Now, if only I could find one of those red and white creations for myself.

Thanks to Tóth, Hungary has proven that is possible to look both polished and patriotic. I just can't wait to see what the team will wear for the closing festivities.

If there was a medal for best-dressed country, Hungary would hands down get the gold.