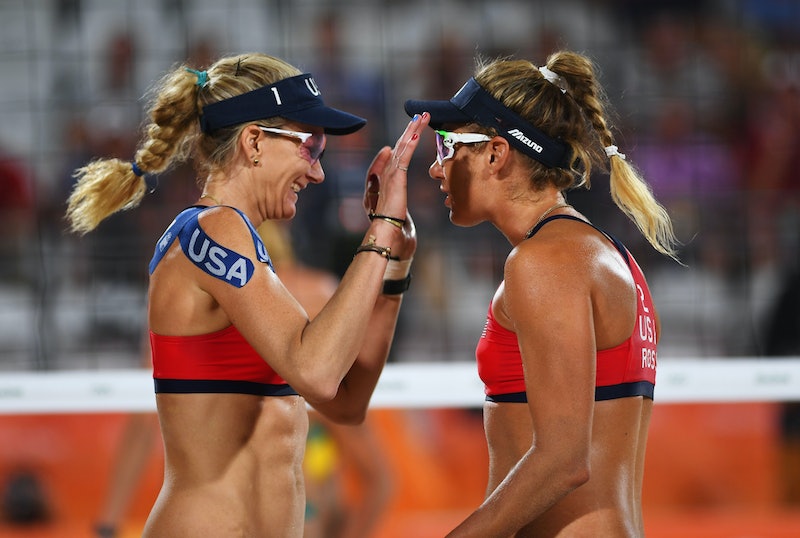 They're often a topic of discussion at each Summer Games — some find them practical and easy to move in, while others find them to be too revealing. Either way, though, Team USA is certainly rocking their bikinis — so, can you buy USA women's beach volleyball uniforms?

The debate surrounding beach volleyball uniforms has long been an interesting one. The rules have shifted a lot over the years — bikinis are definitely still the norm, but board shorts, body suits, and one-piece bathing suits are allowed as well. This year, the Egyptian beach volleyball team has made headlines for competing in long-sleeved shirts and pants, which is an exciting landmark for the Olympic event.

For her part, three-time beach volleyball Olympic Gold Medalist Kerri Walsh Jennings is completely at peace with her uniform. She told The Huffington Post, "The original way to play beach volleyball was in a bikini and board shorts, and I don’t know what else they want us to wear." She also explained that her uniform, which she designed alongside Asics, is built for performance rather than flashiness. It's a chic, yet utilitarian look, and even if you don't happen to be a beach volleyball champion, it's a great look for the beach. So, can you get one for yourself?

Well, unfortunately, they're not for sale — yet. Asics sells a whole line of beach volleyball bikinis, but there aren't any styles similar to the ones Walsh Jennings and her teammate April Ross have been wearing for the Rio Games currently for sale.

Still though, there's hope yet: After all, you can always stock up on Team USA gear at Ralph Lauren, and Lululemon sells swimsuits in a similar silhouette to the awesome high-tech ones they designed for Team Canada. Plus, since Walsh Jennings helped design her suit, maybe she'll create her own line someday...

Lululemon Free to Be Bra, $58, Lululemon

More like this
The 20 Most Comfortable Pairs Of Underwear For Women
By Kristin Collins Jackson
The 5 Best Women’s Cashmere Sweaters Under $50
By Andrea Hannah
How To Get Your Hands On The Pat McGrath X Supreme Nail Kit
By Justine Knight
Prefer Alcohol-Free Perfumes? Water-Based Fragrances Are On The Rise
By Audrey Noble
Get Even More From Bustle — Sign Up For The Newsletter